I’d venture to say that creating and maintaining a website is one of the bigger dreads of a professional author. You know you have to do it, but you’ll do anything to avoid it. Every couple of years you end up having to do a complete overhaul, which is a huge and stressful time suck when none of us have any time to spare, ever, anyway, and I’d bet good money that I’m not the only one who postpones it for as long as humanly possible.

But with my new series, I knew I had to bite the bullet. And I knew exactly who I wanted to hire.

Our David recently did a fantastic interview with the incomparable Madeira James of Xuni.com,  so I didn’t want to go over the same questions.  I thought it would be interesting to write about Maddee’s process of creating a website design – from the author’s point of view.

Maddee asks her clients to choose 4-6 images (pulled from any number of stock photo sites), and she designs the site from those images. She recommends that the images not be specific to one particular book, as that would date the site too quickly. It’s more about the overall, encompassing feel an author wants to convey to a potential reader.

Well, that’s a brilliant and also intimidating assignment. And I’m sure Maddee gets a fair number of control freaks who are very specific about what they want (of course none of us know any of THOSE!)

I wouldn’t dare to guess where I fall on the control freak scale – I know I have my… moments… but I think in general I’m pretty good at maintaining supreme control of my own projects but going with the flow and trusting the process when someone supremely talented is in charge, as was entirely the case here.  I really encourage you to browse through Maddee’s portfolio so you can see what I mean.  Every one of her sites is like a movie trailer: a seductive tease about a story that you just can’t wait to see. (I WISH I could see the films of some of those websites…)

Having to choosing the specific images for myself was panic-inducing, though, especially because I write so many subgenres of thriller. Five images?  Six?  How could I possibly narrow it down?

I knew I wanted to emphasize my Huntress Moon series while being general enough to give a sense of ALL of my writing. I definitely didn’t want to get too supernatural, because the Huntress series is straight crime (pretty much!) and Book of Shadows is also less overtly supernatural than my earlier novels. At the same time I did have to suggest the supernatural to encompass my other books. Also, I generally lean VERY feminine in my tastes, and Maddee does some lusciously femme designs, but I knew I had to contain myself on that front because I have a LOT of male readers who would be turned off if I let myself go that way. And I definitely didn’t want the website to give the impression that I write paranormal romance (even though I do have a couple of books out in that genre with the Keepers series),  because what I write is much darker and more ambiguous than the required HEA (happily ever after) end of any subgenre of romance.

Also, there’s the whole issue of my non-fiction, the Screenwriting Tricks for Authors books on writing. How could I suggest THAT on top of everything else I was trying to do?

(Are you starting to see the kinds of questions you’re confronted with when you sit down to create a website design?)

Luckily Maddee is incredibly perceptive on this front, and when we sat down to talk about the design, she instantly got what I was talking about in terms of supernatural vs. crime thriller, male vs. female, fiction vs. non-fiction. This was also easy to do because when you have the examples of a portfolio as extensive and varied as Maddee’s, it was easy to talk about the qualities of her other sites that I wanted in mine (I gave her a word list just like the word lists I’m always encouraging writing students to do: dark, dreamlike, erotic, filmic….)  I was very confident that once I came up with the images for her, she’d have all my desires and concerns in mind when she was doing the design.

That still left the problem of coming up with the images.

So I browsed and I brainstormed. Horrifying process.  I don’t know about you, but I’m a WANT IT ALL NOW kind of person, and limitation is not my idea of a good time.  But I did know four solid things: I wanted to emphasize a polarity and an erotic tension between male and female figures. I wanted the moon to figure prominently.  I wanted a strong suggestion of film, and I’m a fan of the classic LOOK of an old filmstrip. And I wanted to suggest a shattered psychological state, broken glass or a broken mirror.  So I came up with images for those four things, and a couple of others: multiple doors and a ghostlike image.

And then I turned it all over to Maddee and waited with bated breath.

And she hit it out of the park on the first design:

There are a million things I love about the site. The descending circles of moon, man, woman give me a sense that all of these entities are dreaming each other.  I can’t say enough about how much I love the fim strip with my name.  It wasn’t my idea to have my own image in the site design but I love how Maddee worked it in. The writing was also her idea and I swear, there’s writing on the moon – that’s so trippy and cool, and completely apropos. There’s gorgeous color in the site but subdued enough that I don’t think it will turn men off. The moon, the film strip and the font of my name give it a psychedelic carnival effect that makes me think of Ray Bradbury, one of my huge literary influences.

I could go on and on, and I haven’t even gotten to the clarity of the organization, which is obviously a whole separate post. But to say I’m thrilled is the understatement of the year.

So obviously, I’d love your comments on the new website, but my actual question for the day is: What five images would YOU would choose to convey what you’re writing? Or – what are five images that convey YOU, personally?  I think it’s a powerful creative and spiritual exercise. Scary and fun and illuminating.  Let’s hear it!

PS: I’m thrilled to report that Huntress Moon made Suspense Magazine’s list of Best Books of 2012! 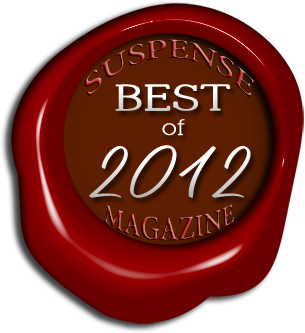