As the father of four children (two sets — one now in their twenties and the other in their pre-teens), I’ve seen a lot of so-called “family-friendly” movies.  Some of them good and some of them bad.  A few have been terrific and quite a number have been just dreadful. 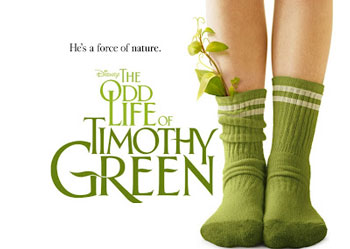 But I don’t think I’ve ever seen a “kids'” movie as jaw-droppingly awful as THE ODD LIFE OF TIMOTHY GREEN.

Now usually, when an adult says something this harsh about a kids’ movie, it’s because the critic in question is just a curmudgeon.  A grown-up who’s lost touch with his inner-child and can no longer be moved emotionally by films filled with pathos and/or whimsy.   I know people like this myself and I’ve always felt sorry for them.  What does it say about one’s adult existence if you lack the capacity to feel something — really feel something — when E.T. boards that spaceship and leaves poor Elliott behind?

But in this case, I promise you, my unequivocal statement that THE ODD LIFE OF TIMOTHY GREEN is one of the worst kids’ movies ever made, is not coming from a heartless grinch with no appreciation for flights of fancy.  In fact, it is coming from someone who had hoped it would be a fine entertainment.  My family and I saw the film three weeks ago at the behest of my son Jackson, whose birthday we were celebrating, so I truly wanted to enjoy it.

But I just couldn’t.

By now, you have to be wondering just what THE ODD LIFE could have possibly done so poorly as to earn such enmity from a big, old softie like me — someone who cries like a baby every time the credits roll at the end of BIG FISH?

The answer’s quite simple: There is not a single credible moment in the film.  Not one.  No character ever — ever — behaves the way a real person would.

I swear to you, this is no exaggeration.

“But, wait a minute, Gar,” I can hear you saying.  “This is a movie about a little boy who sprouts from a garden in answer to a childless couple’s prayers.  It’s a fantasy, and fantasies aren’t supposed to be credible!”

To which I reply, “Nonsense.”

The best fantasies are those that are well grounded in reality.  The magic in them works because, in the world in which they operate, characters abide by the very same rules of logic we do.  Fantastic things may happen to them, things that are realistically impossible, but their reactions to these things ring true.  Credibility is the lifeline a filmgoer — or reader — can cling to when everything else in a story is threatening to throw them overboard.  (Or worse, insisting that they jump.)

THE ODD LIFE OF TIMOTHY GREEN literally defies you at every turn to believe what its characters are doing.  When all common sense suggests they turn right, they turn left instead.

You want examples?  I could give you several dozen.  But dismantling, piece by piece, a film like this — one that so clearly has its heart in the right place — would be a very mean spirited thing to do.  So I’ll just let one key example suffice for all the rest.

The film’s story is told in flashback by Cindy and Jim Green, two wild and crazy kids madly in love but unable to conceive, as they are interviewed by a pair of sober and skeptical adoption agency officials.  To illustrate how fit and well-prepared they are to become adoptive parents, the Greens tell the officials the incredible tale of their “son” Timothy: a ten year old boy they raised as their own after he unexpectedly sprang from their front garden one night like an overgrown, ambulatory carrot. 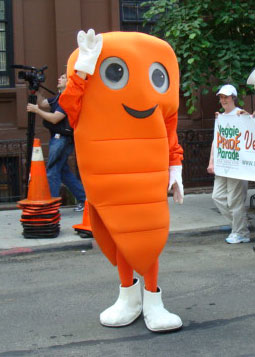 Only hours before, Cindy and Jim had buried their extensive wish list for the child they can never have in a box out in the garden, and they understood immediately that Timothy — sweet and innocent and brimming with heartwarming bromides — was meant to be that wish list personified.  With living green leaves sprouting from his shins to authenticate his agricultural origins, Timothy had to be a gift from . . . Somebody.  Right?  So they kept him, and passed him off to everyone in Stanleyville as their own (adopted?  inherited?  borrowed?) child.

(The folks of Stanleyville are a simple and uncurious lot, apparently.)

Anyway, from there, the Greens’ story gets much more preposterous — and far more sappy.  In the end, after having changed the lives of everyone he’s come in contact with for the better, Timothy loses his leaves and eventually returns to the garden, never to be seen again.  The interview comes to a close and the adoption agency officials bid the Greens farewell, having just heard them relate a story only slightly more fantastic than that of James and the Giant Peach as if they’d been under oath to tell the truth, the whole truth, and nothing but the truth, so help them God.

Naturally, Cindy and Jim’s application for adoption is approved and a beautiful little girl is promptly delivered at their doorstep, just in time for Fade Out.

That THE ODD LIFE OF TIMOTHY GREEN had to end on this cheerful note, or one remarkably similar to it, is inarguable.  This is a Disney movie, after all, and happy endings go with the territory.  I love happy endings.  But a happy ending slapped onto the backside of a film with zero effort made to support it with so much as a wisp of realism is an insult to one’s intelligence.  In this case, THE ODD LIFE ends the way it does for one reason, and one reason only: because that ending suited the man who wrote and directed it.

That’s what’s wrong with the movie throughout: Everything that happens in it only seems to happen because the movie’s screenwriter/director Peter Hedges wanted it that way.  Logic, realism, common sense — none of these things plays any part in the choices the film’s characters make.  Not in the things they say, not in the things they do.

(I suspect I’ll be encouraged to offer further examples of this in the comments that follow, should you be interested in hearing them.  But I won’t go into them here.)

I don’t know whether THE ODD LIFE is as horrible as it is because Hedges is lazy (“I don’t feel like explaining how this could happen.”) or just plain clueless (“I can’t explain how this could happen.”).  But I do know his film comes off as the work of a man who cares far more about the emotional responses he wants to elicit from people than how those reponses can be earned honestly.  When a writer, simply to achieve a desired result, puts his own best interests before those of his characters, he is doomed to fail.  In successful fiction, the Cardinal Rule is not “For every action there must be an equal and opposite reaction” — it’s “For every action, there must be a viable and perceptible reason for the reader (or viewer) to believe it.”

Defenders of THE ODD LIFE OF TIMOTHY GREEN — and there are many, like these two little guys . . .

. . . would probably say the problems I cite are all in my head, that I just didn’t approach the film with the proper commitment to suspending my disbelief.  But demanding that your audience suspend its disbelief indefinitely, simply because the story you are telling is a fairy tale, is not a substitute for telling it in such a way that it requires as little suspension of disbelief as possible.  I saw no evidence that the makers of THE ODD LIFE gave a rat’s ass how credible its people and situations were, and that’s a shame.

Because I like a good, child-friendly fantasy as much as the next heartless bastard.

Questions for the Class: How important is credibility in fiction to you?  What was the last critically-acclaimed film or book that failed to meet your standards in that department, and why?

10 thoughts on “THAT’S INCREDIBLE! (AND THAT’S THE PROBLEM.)”