Thankfully I was added in this by the mother of a friend I grew up with. Some of you will recall that in March I went back to my home town and spoke to the writer’s group there. One of the officers of the group was said mother. She keyed into one of the things I mentioned in my talk, and not long ago, she sent me a note with the information I needed (unsolicited).

See, when I look back at my K-12 education (5 to 18 years old for those of you not familiar with the U.S. system), I can pick out a hand full of teachers who meant a lot to me. And out of that handful there are two who really stand out, and one that gets honorable mention.

Of the two standouts, one was my high school drama teacher. He treated me like an adult, and encouraged me in things I never thought I’d do. I’ve been lucky over the years to stay in contact with him, so he knows how important he’s been in my life.

The person I’m talking about was my 5th grade teacher, Mrs. B. She may have been the youngest teacher at our school. And though the hormones hadn’t quite kicked in with us 10 year old, we all knew she was pretty hot. (It was amazing how many fathers who had never attended a parent-teacher meeting before always seemed to make it for ones with Mrs. B.) But what was important to me about Mrs. B. was that she was always, always encouraging.

The mother I mentioned above had a daughter a couple years older than me who had also had Mrs. B. This daughter apparently had the habit of doodling cartoons and other drawings in the margins of tests and homework. Instead of chastising her and telling her to stop it (like apparently some later teachers did), Mrs. B. complimented her on them, and even asked if she could keep some for her own collection. To this day, that girl remembers this.

My most vivid memory of Mrs. B. was that everyday after lunch she would sit us on the floor on these great carpets she had, get into her rocking chair, and read to us for a half hour. This was my favorite time of day. Hearing the stories meant so much to me. And on those few days when she couldn’t do this for us…well, those were not my favorite.

It was right about this time, in fifth grade, that I told myself, and several of my friends, that I was going to be an Author. And I know part of why I felt confident about that choice was because of Mrs. B.

All these years I’ve been wanting to tell her just how much she meant to me. To let her know that I thought of her often, and that she was one of the best teachers I’d ever had. Well, in that note from my friend’s mom was Mrs. B.’s phone number.

Because of travel, I wasn’t able to call for several weeks. In a way, I was thankful for that. I was a little nervous to call her. Would she remember me? How would she react? I think I kind of reverted to school boy.

Finally, I pulled out the number and called. No answer, just voicemail. But I wasn’t going to leave a message, so I hung up. I found excuses not to call for the rest of the day, my fear creeping up again, but then, just about 24 hours later, I redialed her number.

Now know that – as is my way when faced with similar situations – that I had played out in my head multiple ways of reintroducing myself. I was going through them again as I pressed the connect button.

But then, before the phone had even rung in my ear, someone on the other end picked up.

“Brett Battles?” a familiar, if a bit older, voice said. I could hear her smile in her voice.

It took me a second to realize that she had caller ID, and that all the intros I had practiced were unnecessary.

Of course she remembered me. I think she probably remembers most of her kids.

We talked for probably twenty minutes, me and my fifth grade teacher. It was an amazing conversation, and I got to tell her all the things that I so wanted to say. And you know what? She’s just as wonderful today as she was then.

She said she’d seen my picture in the local paper about my books, and that I hadn’t changed at all. I said I probably wasn’t shaving back then. She asked about my family, and was interested in hearing about my life. We talked about the other kids in my class. And she wanted me to call her by her first name, something I told her was just not going to happen. And finally we exchanged contact information with a promise not to loose touch, and hung up.

But what I didn’t expect was that I would feel so good. I rode a cloud from the moment I heard her voice until I fell asleep that night. I still rode it in the days after. It wasn’t that I felt good with myself for calling her, it was more I was reminded about how great it was that she and my other wonderful teachers had been part of my life. I am who I am today in large part because of these people. And the work they’ve done, and the goals they’ve achieved live through me, and their other students.

Thank you Mrs. B. and Mr. K. and all the others. Thank you more than I can ever express.

All right, Murderati peeps, time to name your favorite teacher and tells us why they mean so much to you. I expect all of you to respond to this one. We should have a boat load of comments.

Let’s share and celebrate these people who molded us and guided us and helped us on our way. 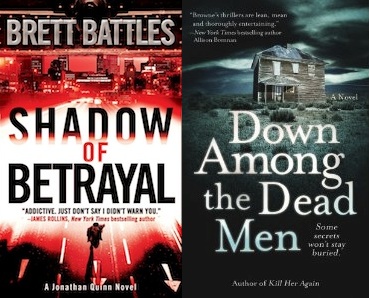 Also I wanted to mention that next Tuesday marks the release of the third Quinn book, SHADOW OF BETRAYAL, in paperback…AND the release of Rob’s latest, DOWN AMONG THE DEAD MEN! Two great paperbacks, perfect for the beach or the plane or wherever you may be!

@lisekimhorton If they put Trump supporters into Secretary of State positions and state legislative ones, it won't matter.

@morninggloria The best lack all conviction, while the worst are full of passionate intensity.