As regular readers of this blog know, I'm fond of and occasionally inspired by, what I call "WTF?" stories: weird tales that fire a writer's imagination and make  him or her think "there's got to to be a story behind that." Here, for your entertainment and possible inspiration, are a few more "WTF?" stories I've recently stumbled across. This batch will probably appeal more to the thriller/paranormal suspense/horror writers among us, or the folks who write what I call "what-dunnits":

Standing Stones Under Lake Michigan : In 2007, a group of archaeologists were scanning the bottom of Lake Michigan's Grand Traverse Bay with a special imaging sonar device. They found a number of shipwrecks, old cars, even an old buggy. They also found this: 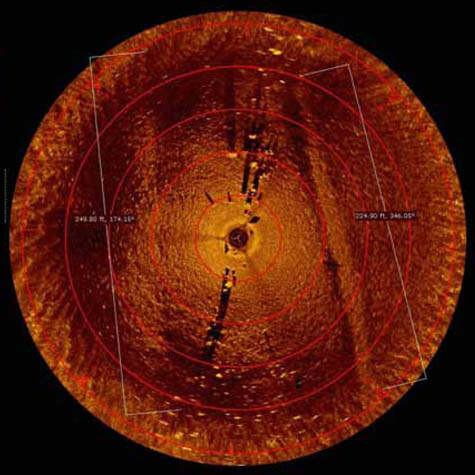 In addition to the apparently arranged standing stones, a nearby boulder appears to have markings that resemble a mastodon with a spear in its side. If verified, this would make the site somewhere over 10,000 years old and would show the mastodon ranging farther north than previously believed.

So who (if anyone)  built this? And was it drowned by some cataclysm? I like the idea of some ancient mystical ceremony in an American Stonehenge gone horribly wrong…and something left behind and waiting beneath the water….

The Bloop:  In the summer of 1997, the National Oceanic and Atmospheric Administration was listening to the ocean using a hydrophone array formerly used to track Soviet submarines. At  50° S 100° W, off the Southwest coast of South America,  they heard multiple instances of a mysterious sound that, according to the NOAA description, "rises rapidly in frequency over about one minute and was of sufficient
amplitude to be heard on multiple sensors, at a range of over 5,000
km." Experts agree it's probably biological in origin, but with that kind of amplitude,  it's a big sumbitch–bigger, they say, than even a blue whale. Some H.P. Lovecraft fans have noted that the Bloop, as scientists have  dubbed the noise, is located near the location Lovecraft described for the sunken "nightmare corpse-city" of R'lyeh, where the evil cosmic entity Cthulhu lies dreaming. The Lovecraftians have theorized (hopefully with tongue in cheek) that the Bloop is a noise made by Cthulhu stirring in his troubled sleep, preparing to rise and wreak his own particular breed of mayhem. Ph'nglui mglw'nafh Cthulhu R'lyeh wgah'nagl fhtagn! 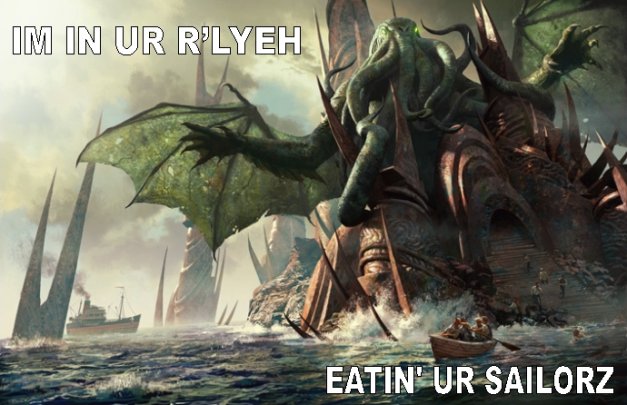 You can hear the Bloop (sped up): here.

Slow Down: Another, and to my mind, more ominous sounding deep-sea sound picked up by the NOAA listening team has been dubbed "Slow Down."  According to NOAA, "The sound slowly descends in frequency over about 7 minutes and was of sufficient amplitude to be heard on three sensors at 95W, and 8S, 0, and 8N, at a range of nearly 2,000 km. This type of signal has not been heard before or since. It yields a general location near 15oS; 115oW. The origin of the sound is unknown." You can hear it at the link.

The Roar From Space:  At a recent meeting of the American Astronomical Society, astronomers reported that they had detected a loud "noise" from space. The signal was "six times brighter than the combined emission of all known radio sources in the universe," they said. No one can seem to explain  what caused it. It's not from any known radio source, and it's not from a radio-wave emitting galaxy. Whatever it is, it's drowning out the signals from the earliest stars that the scientists were looking for. Is something large and angry headed our way? Is this the echo of some huge interstellar disaster  "Like a million voices cried out in terror… and were suddenly silenced…"?

Ideas: they're everywhere. Feel free to take these and run with them….

13 thoughts on “Tales of Mystery and Imagination, or WTF? Redux”