Yes, I’m still alive! I know, I was beginning to have doubts myself.
This year has just been non-stop. They always are, I guess, but releasing three books in a row within months of each other, and getting ready to release a fourth next month – I’ve never done anything like this before and I am TIRED, but starting to crawl my way back to the surface and start to engage with, um, people again.
So, what’s in the works?
First off, I’m writing Wolf Moon, book 4 in the Huntress series, and there’s something I have to clear up right away. I’ve come across a completely unanticipated problem: people who are reading the Huntress books are assuming they’re a trilogy – and worse – calling them a trilogy in reviews. I’m always grateful for reviews, and they’ve been almost universally stellar, thank you all who have taken the time! – I couldn’t ask for better ones! But wow, this is so NOT a trilogy, and having that idea out there is understandably confusing to readers who pick up Cold Moon expecting an end to the series. Cold Moon is definitely not the end, and I thought it would be pretty clear in the way the book ends that there is another one coming. It’s funny, though, how there’s no real way to counteract that assumption once people start repeating it. So yeah. Book 4 is coming, and I’m not going to say much right now, but it’s really different from the first three. (Why am I constantly doing this to myself? I wonder…)
And a quick note for AUSTRALIAN readers: Huntress Moon is on sale throughout August on Amazon.AU – just 1.99! http://www.amazon.com.au/gp/product/B00NKTTDH4 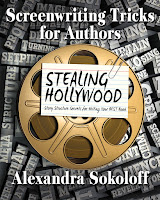 Next – it’s nearly killed me to get it done, but yes – the PRINT workbook of Screenwriting Tricks for Authors, STEALING HOLLYWOOD, will be available as soon as sometime next week. I know some of you have been waiting for this one for practically ever – well, it’s completely worth the wait! But – make sure you’re on my regular mailing list if you want to get the release announcement (and discount on the new ebook). If you’re not sure, it doesn’t hurt to try signing up again; you won’t get double announcements, the extra email will automatically drop from the list. http://alexandrasokoloff.com/newsletter-form.php

For the rest of the summer (Scottish summer, that is…) – well, it’s August, so I’m taking a bit of a break next week to go down to London to see Benedict Cumberbatch in Hamlet. 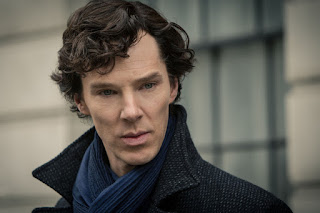 And Craig and I are gearing up for the Bloody Scotland crime writing festival, followed frighteningly soon after by Bouchercon in Raleigh. Lots of events going on at both, and I wanted to let people know about upcoming workshops as well, since I’m doing a bit more teaching in the fall than I usually do, so here’s the lineup:

I’ll be teaching a master class in story structure at Bloody Scotland, as well as a self-publishing workshop. I’ll also be paneling on Film Writing (and Film 101 for Authors!) as well as on the issue of the depiction of violence against women in books, film, and television.
Fans of Craig Robertson can also find him appearing on panels and compering Crime at the Coo: a cabaret pub night on Saturday, featuring Bloody Scotland authors performing song, dance and poetry. Yes, I’ll be singing, too!

—October 8-11
Bouchercon World Mystery Convention
Raleigh, NC
Craig and I are both on the program.

—October 31-November 1
805 Writers Conference
2-hour Screenwriting Tricks for Authors workshop
Ventura, CA
Craig and I are both on the program.

November 13-15
Shetland Noir
Shetland Islands, UK
Craig and I are both on the program.

Hope you’re all having fabulous summers. Would love to hear what you’re up to!
— Alex