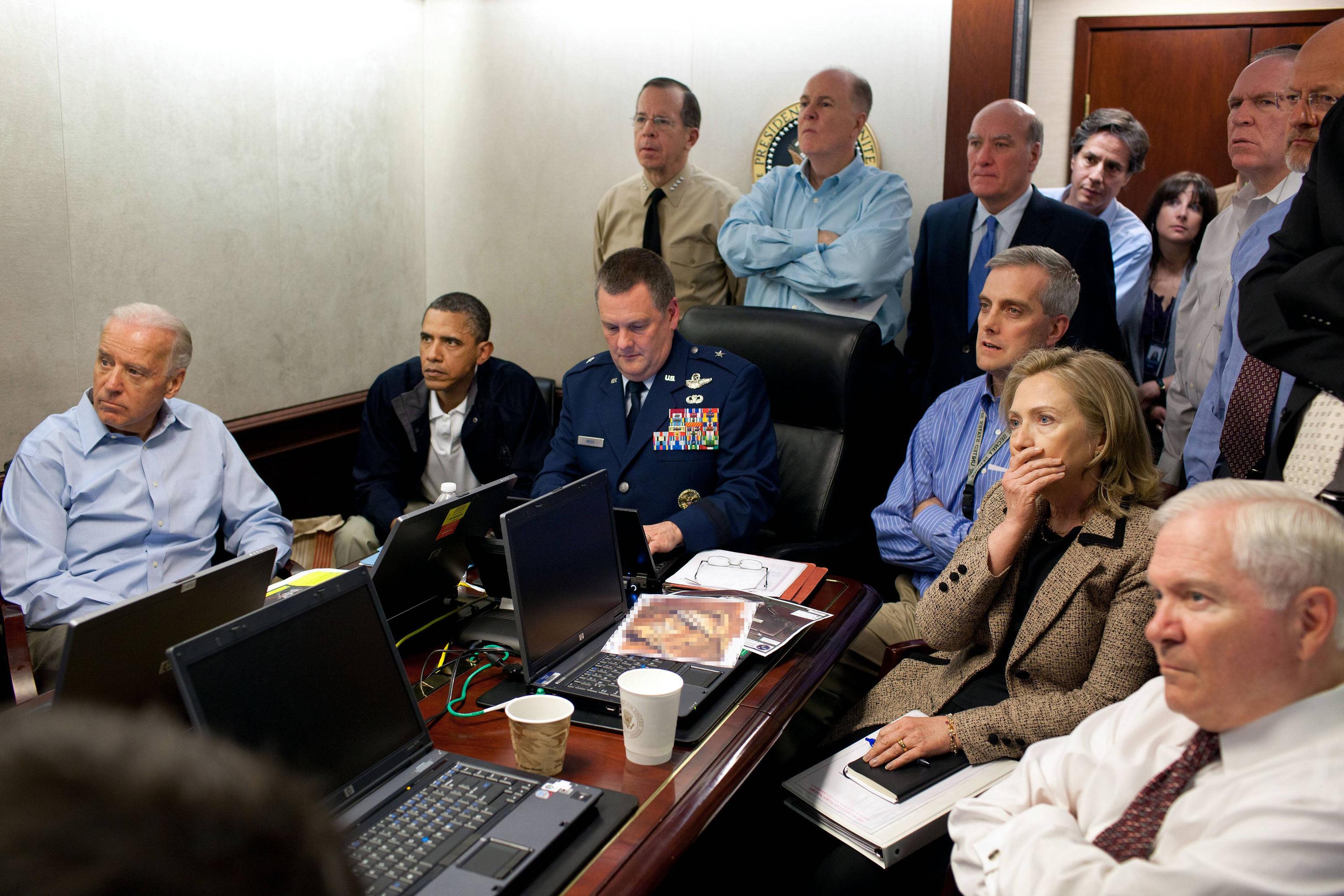 I have to confess, I’ve been riveted by and keep coming back to the photograph above. In case you’re not familiar with the photo, this is the Presdent of the US and his advisers watching, in real time, the operation that took down Osama bin Ladin.  A larger, hi-res version is here.

Now imagine trying to put that scene down as words on a page.

There are excellent reasons why we most likely will never see the faces of the Navy SEALS who carried out the operation. We’d basically be putting a target on their backs and the backs of their families if we did that. But damn, I sure would like to. Wouldn’t you? Wouldn’t you like to know? Would they be calm? Determined? Grim? Furious? Nervous? Scared shitless? I’d love to be able to get into their heads, then write it all down.

It’s rather ironic that I became so transfixed by these thoughts on the same day I made my flippant comment on Tess’ post that “Reality’s boring, that’s why I read.” Because right there, in that picture, is some reality that could come right out one of the very thrillers we read and write.

Problem is, far too many thrillers–some of them extremely popular–feature heroes I can never quite accept as human. Instead of realistic people who feel fear, doubt, tension, you get Bolt Studly, the mavericky, two-fisted, fearless ex-Navy Seal/CIA Agent whose only flaw is that he rushes headlong into the action. I much prefer my action heroes with some vulnerabilties: Charlie Fox, Jonathan Quinn, John Rain, to name just a few. Even Jack Reacher got a lot more interesting when he began to face the possibility he could lose.

Living where I do (right next to Fort Bragg, headquarters of JSOC) and doing what I do as a day job, I’ve met quite a few Special Ops soldiers. No SEALS, but plenty of Rangers and Green Berets, and a few guys I’m pretty sure were Deltas (the haircuts are the giveaway. You meet a guy around here who says he’s in the Army and he’s got hair down over his ears, you’re most likely talking to someone from Delta). They pretty much run the gamut you’d expect of any group of young men: some are great guys, some are blustering assholes. Some are quiet, unassuming family men, some have, shall we say, messy personal lives. A very few, quite frankly, I’m concerned to have walking around loose. And, I imagine, you get the same spectrum in SEAL Team Six, the people who took down OBL.

Which, to me, makes the real life story even more amazing. Because these guys aren’t perfect Bolt Studly (even though some of them may swear to you  that they are, especially if you’re female). They’re not Superman. They’re real. They’re three dimensional. They’re human. Admittedly, humans who can shoot the pips off a playing card at 100 yards, but still, they worry, they fear, they get the shakes. Then they do the job anyway.

For that, we thank them.

24 thoughts on “Sooner or Later It All Gets Real”