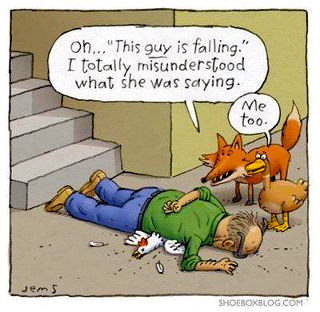 I like unintentional humour, and a good deal of amusement can be had from slips of the ear ― words misheard, misinterpreted or simply misunderstood. I’d no idea, though, until I started looking into the subject, how many different words there were to describe this phenomenon, so I thought I’d share some trivia with you.

First up is a Homonym, which is when two or more words have the same sound or spelling, but differ in meaning, from the Greek ‘same name’.

A nice example comes from ALICE’S ADVENTURES IN WONDERLAND:

“Mine is a long and sad tale!” said the Mouse, turning to Alice, and sighing.

“It is a long tail, certainly,”’ said Alice, looking down with wonder at the Mouse’s tail; “but why do you call it sad?”

Homonyms are closely related to Homographs and Homophones.

A Homograph is one word that is spelled exactly the same as another, but which not only has a different meaning, but often a different derivation as well. A Homograph can also be a Hetronym, from the Greek ‘other named’. A good example is the word ‘sewer’, meaning both a place for sewage, and someone who sews. The derivation of the former is from the Latin, meaning related to water, but the derivation of the latter is from the Sanskrit meaning thread or string.

Occasionally, Homographs are spelled identically, but pronounced differently according to the meaning, hence:

“When I tear my fingernail, I shed a tear.”

Whereas Homophones are two words that are pronounced the same but have different meanings. Such as:

“I shed a tear as I watched him climb onto the top tier of the podium.”

Although, come to think of it, both Homographs and Homophones could fall into the overall category of Homonyms.

Then we get to Oronyms, which is apparently a word invented by Gyles Brandreth, and quite frankly I wouldn’t put it past him. An Oronym is a sequence of words that sound the same as another, with endless comic possibilities. The brain hears speech not as individual words but as an overall flow which it has to try to interpret, and what with accents and mispronunciation and slang, it’s hardly surprising that occasionally we get it wrong.

“The stuffy nose can lead to problems.”

“The stuff he knows can lead to problems.”

Actually, by far the best example I can give of Oronyms at work is the Four Candles sketch by the Two Ronnies.

Many words are easily confused, and among the most common are:

Accept – to receive or take in

Rein – means of controlling a horse

Reign – the rule of a monarch

Principal – the head of a school, person being protected by a bodyguard

Principle – a rule or guideline

Androgynous – having both male and female characteristics

Androgenous – having only male offspring

When it comes to song lyrics, the human ear has even more fun and misinterpreting words. The mishearing of words in a song is so common that American writer Sylvia Wright coined a term for it taken directly from her own experiences when as a child she misheard the words of the ballad ‘The Bonny Earl O’Moray’:

Oh, where hae ye been?

They hae slain the Earl O’Moray

The last line should actually have been ‘And laid him on the green’ but for years Ms Wright believed that the unknown Lady Mondegreen had met a similar fate as the Earl O’Moray and came up with the name Mondegreen to describe it.

Since then, of course, the practice has been rife, with one of my favourites being the Kenny Rogers song, ‘You picked a fine time to leave me, Lucille’. For years I heard this as:

“You picked a fine time to leave me, loose heel.

Four hundred children and a croc in the fields”

Instead of the far more mundane:

“You picked a fine time to leave me, Lucille

Four hungry children and a crop in the fields”

Personally, I think I prefer the first version.

“Excuse me while I kiss the sky”

Which was so often misheard as:

“Excuse me while I kiss this guy”

that he actually sang the alternative version in concert.

I think my latest favourite has to be the modified lyrics to the new Bond theme, ‘Skyfall’. Instead of:

“Let the sky fall, when it crumbles

We will stand tall

And face it all together”

Let’s have a rousing chorus of:

“Make a trifle, make a crumble

And we’ll eat it all together”

All it needs is cake. Now, doesn’t that make you feel better? So, ‘Rati, what are you favourite examples of any of the above? Let’s hear ’em!

No Word of the Week this week. I think you’ve had quite enough.

24 thoughts on “Slips of the Ear ― Homonyms, Oronyms, Homographs and Mondegreens”