At some point today, SICK should be available in the Kindle store both in the U.S. and the U.K., at barnesandnoble.com, and at smashwords.com. In celebration of that, thought I’d give you a taste from the beginning: 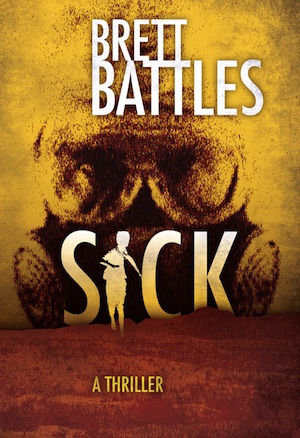 A cry woke him from his sleep.

Daniel Ash pushed himself up on his elbow. “Josie?”

It was more a question for himself than anything. His daughter’s room was down the hall, making it hard for her to hear his sleep filled voice in the best of circumstances. And if she was crying, not a chance.

He glanced at the other side of the bed, thinking his wife might already be up checking on their daughter. But Ellen was still asleep, her back to him. He’d all but forgotten about the headache she’d had, and the two sleeping pills she’d taken before turning in. Chances were, she wouldn’t even open her eyes until after the kids left for school.

Ash rubbed a hand across his face, then slipped out of bed.

The old hardwood floor was cool on his feet, but not unbearable. He grabbed his t-shirt off the chair in the corner, and pulled it on as he walked into the hallway.

A cry again. Definitely coming from his daughter’s room.

“Josie, it’s okay. I’m coming.” This time he raised his voice so he was sure she would hear him.

As he passed his son’s room, he pulled the door closed so Brandon wouldn’t wake, too.

Josie’s room was at the other end of the hall, closest to the living room. She was the oldest, so she got to pick which room she wanted when they’d moved in. It wasn’t any bigger than her brother’s, but Ash knew she liked the fact that she was as far away from mom and dad as possible. Made her feel independent.

Her door was covered with pictures of boy bands and cartoons—she was in that transitional stage between kid and teenager that was both cute and annoying. As he pushed the door open, he expected to find her sitting on her bed, upset about some nightmare she’d had. It wouldn’t have been the first time.

His words caught in his mouth.

She wasn’t lying in the bed. She was on the floor, the bedspread hanging down just enough to touch her back. Ash rushed over thinking that she’d fallen and hurt herself. But the moment his hand touched her he knew he was wrong.

She was so hot. Burning up.

He had no idea a person could get that hot.

The most scared he’d ever been before had been when he’d taken Brandon to a boat show in Texas, and the boy had wandered off. It took Ash less than a minute to find him again, but he thought nothing would ever top the panic and fear he’d felt then.

Seeing his daughter like that, feeling her skin burning, he realized he’d been wrong.

He scooped Josie off the floor, and ran into the hallway.

He knew his voice was probably going to wake Brandon, but, at this point, he didn’t care. Josie was sick. Very sick. He needed Ellen to call an ambulance while he tried to bring their daughter’s temperature down.

“Ellen!” he yelled again as he ducked into the bathroom.

Using an elbow he flipped on the light, then laid Josie in the tub. He wasted several seconds searching for the rubber plug, then jammed it into the drain, and turned on the water, full cold. To help speed up the process, he pulled the shower knob, and aimed the showerhead so that it would stream down on her, and cool her faster.

Where the hell was Ellen?

He put the back of his palm on Josie’s forehead. She was still on fire.

He was torn. He wanted to stay with Josie, but the pills Ellen had taken must have really knocked her out, so that meant it was up to him to get help.

He raced into the hall and back to the master bedroom. The nearest phone was on Ellen’s nightstand, next to their bed.

He shook her once, then picked up the phone, and dialed 911. As he waited for it to ring, he glanced back at the bed.

He reached down, and rolled Ellen onto her back, thinking that might jar her awake. But her eyes were already open, staring blankly at nothing.

He flipped on the light. The skin around her mouth and her eyes was turning black, and there were dark, drying streaks running across her face from her eye sockets where blood had flowed.

He touched Ellen’s face. It was as cold as Josie’s had been hot.

And that is just the start. If you’d like to read more, you’ll be able to download a longer sample at the sites where it’s for sale. Or you can just buy the whole thing for $2.99.

I’m pretty jazzed about SICK, but I’m biased. So here’s what Elyse at popculturenerd.com has to say: “Like a fever, SICK makes you sweat and keeps you up all night, wondering what the hell is happening. It’ll make your heart race like someone shot you with an EpiPen. You think Battles was badass before? He just cranked it up to 500 joules. CLEAR!” I probably owe her a few bucks for that quote.

So, what did you think? Intrigued? Not? Something you’d want to read more of?

Get SICK for the Kindle here!

Get SICK for the Nook here!

Get SICK at Smashwords.com in most formats here!