I share my very good friend Rob’s reluctance toward self-promotion. But, unlike him, I do not have a wonderful wife reminding me that I should do it anyway. So I hope he doesn’t mind (and you all don’t either) but I’m going to borrow the spirit of his wife and do a little (brief) BSP today.

On the same day Rob’s new book DOWN AMONG THE DEAD MEN came out last week, the mass paperback edition of my last book, SHADOW OF BETRAYAL, also arrived here in the states. Here’s a little teaser:

There are a couple of things I incorporated into SHADOW OF BETRAYAL that are personal to me. One would be most of the California locations. For the most part I tried to use places I frequent now or did in the past, and places that have special meaning for me. Also, there is a special child that is a central character in this book, a little girl named Iris who happens to have Down Syndrome. Down Syndrome, as some of you know, is a big part of my life as my son (who is just a week away from graduating Junior High) was born with it. These are some of the most wonderful, loving children in the world, and I hope I’ve been able to show that affectively with Iris.

So if you get a chance please visit your local independent bookstore or wherever you prefer to shop and pick up a copy. My pretend wife wants me to tell you that you’ll definitely enjoy it! 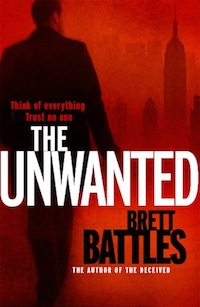 One last thing for any UK fans out there. In the UK, SHADOW OF BETRAYAL is called THE UNWANTED. The paperback edition for THE UNWANTED will be out October 14th, but a little treat here as I’ve just received the new paperback cover!

Thanks for indulging me, folks. Little to no more BSP from me until Apirl!

Okay, all…I’m going to give away two copies of SHADOW OF BETRAYAL, so in the comments let me know one of your favorite places. I’ll then put everyone’s names in a digital hat and pull out two lucky winners! (I’ll post the names of the winner in the comments, too, late Thursday night. So check back. I’ll need to get your address from you!)

25 thoughts on “SHADOW OF BETRAYAL”