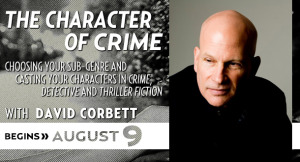 Starting tomorrow, I begin my second class through Chuck Palahniuk’s online writing university, Litreactor. This one is titled The Character of Crime.

The class deals with the importance of knowing your subgenre in order to better understand reader expectations so you can not only meet those expectations but exceed them.

I also stress the need to create characters with sufficient depth and complexity so your story has a chance to achieve not just popular but critical success.

There is still room for four more students in the class, so if you’re interested, sign up now.

I realize I seem to be harping on the same theme as two weeks ago  – the potential for greatness in the crime genre. My apologies if I seem a bore. Two weeks back I was inspired by Don Winslow’s marvelous talk at the Book Passage Mystery Conference. This time I’m just restating my fundamental belief that this is a great genre that owes apologies to no one.

Either way, I find myself returning to a debate we often have in this particular corner of the literary world:

What does it mean to serve the genre, to respect the genre, and to transcend the genre?

I’m normally one of those people who finds the phrase “transcend the genre” more than a little patronizing. It’s so often used to describe the works of literary writers who go slumming in the Naked City to make a few bucks – and who often not only don’t “transcend” the genre, they fail to respect or even understand it.

Literary writers often think of genre conventions as mere formula, and automatically recoil. This is, to my mind, exactly the wrong way to look at it.

But by saying we need to serve or respect the genre, I’m not saying that we can’t expand our usual understanding of what a crime story can do.

One thing I’ll emphasize in the class: The difference between a good crime story and a great one often lies in seeing in its subtlest, most far-reaching or most profound terms the underlying thematic premise of the particular subgenre you choose.

The detective genre, for example, is fundamentally about: How can we determine the truth?

This idea is as subtle and as vast as you care to make it. It’s no accident, for example, that Chinatown is based on the oldest detective story in the Western canon – Oedipus the King – or that it resonates with the same theme: the intrinsic danger in presuming the truth can be known.

And in Vertigo, Scottie Ferguson doesn’t just solve the crime and overcome his fear of heights, he tracks Freud’s understanding of male sexuality, from the pleasure principle (Babs) to romantic idealization (Madeline) to the reality principle (Judy) – with tragic results, as in Chinatown, due to a fundamental lack of knowledge.

At the heart of every detective story lies a mystery – something that baffles our usual understanding of things – and there is nothing confining the limits of that mystery except the reach of your own imagination.

The crime subgenre, which is more about the battle between police and criminals than about solving a mystery, fundamentally addresses the balance between individual freedom and social conformity.

A world run by criminals would be a Hobbesian state of nature, with no rules, the war of all against all, and ultimate power residing with those who possess money and weapons. A world run by the police would be – you guessed it – a police state, with everyone guilty of something, and paranoia and suspicion underlying every act.

Every society seeks a balance between these two polarities, and the crime story is a great vehicle for exploring what it would mean to move the goal posts in one direction or the other.

You can also ask fundamental questions such as what makes a given act a crime, or to whom do you owe your loyalty, and answer them in as ingenious a fashion as you please. Two great Boston crime writers, Dennis Lehane and Chuck Hogan, do this brilliantly in such books as Mystic River and Prince of Thieves.

Crime stories that feature the criminal as hero – like The Thomas Crowne Affair  – often ask us to reconsider the value of the creative individual in a society defined by compromise, mediocrity, and conformity.

The criminal in such stories is often devoted to excellence – and risk – in a way that others in the society are not. In a very fundamental way, the criminal in such stories is a stand-in for the artist, whose role is every bit as challenging, enigmatic, potentially disturbing – even revolutionary. (It’s no great surprise that real revolutionaries are often described as terrorists or criminals by those hoping to trivialize their political aims.)

Other stories with criminal heroes, like The Winter of Frankie Machine, Goodfellas or In Bruges, achieve greatness by forcing the criminal hero to perform a moral accounting of his entire life.

The thriller, which combines elements of the detective story with the horror story, pits the seeker of the truth against relentless pressure and danger. It shares certain traits with the epic and myth, and like those ancient types of stories it can be expanded to show the individual hero, through great sacrifice and personal transformation, redeeming or redefining the society in which he or she lives.

In other words, the genre is perfectly capable of delivering big themes and great art, and it doesn’t need interlopers to pull it off.

This is something I’ll continue to hammer away at here, in my classes, and in my own work. I love the crime genre. I think more than any other form of story it represents our current mythology on how we live. And if you see it in that context, you can achieve something truly original and meaningful and profound.

So, Murderateros – What crime stories do you think have that spark of greatness?

When was the last time you had to defend crime stories against the snoots?

What themes in the crime story affect you most deeply?

Note: I’ll be traveling again today, and won’t be able to check comments until this evening when I get home on the west coast. Don’t let that stop you from chiming in, though. This community is more than capable of having a rousing discussion without me as room monitor.

Jukebox Hero of the Week: I was visiting the east coast this week, and on Saturday had the chance to visit with former Murderati regular Cornelia Read and her beau, the actor Peter Riegert. Peter shared a clip from a former student, the beautiful and gifted and quite tall Storm Large (her real name, interestingly enough). It’s a number from her one-woman show and I can’t get it out of my head.

WARNING: This track has quite explicit language and a perspective on sex and womanhood some may find offensive. If you think you might fall into that camp, by all means skip it. But if you’re up for it, this is one of the wittiest, raunchiest, most wryly ironic and unapologetically non-PC performances you’re likely to see in quite some time. (Real catchy tune, too.)