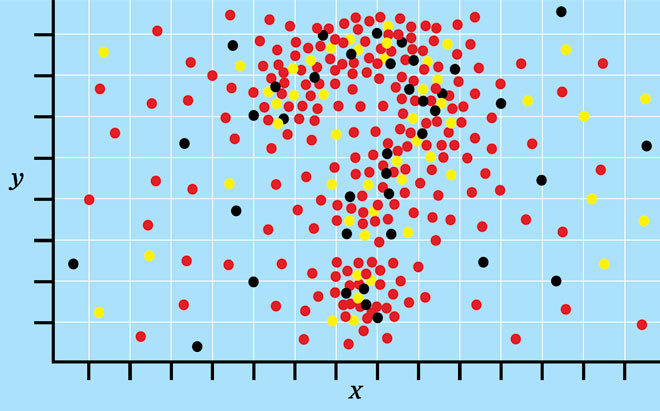 I was sitting in the cafe and the girl with the backpack squinted at a textbook called Statistics and I asked her how the hell she made sense of it.

“I had a choice this semester,” she said. “History or Statistics. I hate essays–I never know the right answer. With math and science I know where I stand.”

I thought for a moment then responded, “Yeah, there’s safety in numbers.”

Me, I always went for the essay classes. The only time I understood numbers in college was if they were measured in ounces, pints, fingers and occasionally grams.

Most students hate essays. They want fill-in-the-blank exams. Or, better yet, multiple choice. Like what you get when you take your test at the DMV. What’s the speed limit in a school zone? How many car-lengths do I have to be from the car ahead of me on the freeway? It’s any man’s guess. Somehow, I always end up getting my driver’s license renewed.

Most students won’t commit to the cumbersome weight of the essay, with its introductory paragraph, supporting paragraphs, and the big close, tying everything together with a resounding punch. It sounds like too much work–and it is. But if you’re a bullshit artist, the essay offers the best chance for that last-minute save-your-ass pass.

You really don’t have to know shit to write a good-enough essay. Want a ten-page essay on the French Revolution? I can wing that. Splice together what I remember of The Three Musketeers, Les Miserable, and that article in Newsweek about Robespierre. Shazam–looks like I’ve been at it all along.

But it’s scary, making it up as you go along. I can see why the numbers people cling to their rulers and compasses.

What I mean to say is that numbers are safe. Chemistry works for a reason. If you’re a little unsure about where to place your feet in the quicksand of life, lean on the numbers. They’ll take you to the next step, and the next, and the next. Before long you’ve left a trail.

I never knew if I was going to ace or fail those essays. It really depended on my ability to read my teacher. Was he a good sport? Did he appreciate a student who bent the rules? Was she strict or old-fashioned? Did she have a bullshit meter, and did it matter?

In my opinion, everything I was taught was open for debate. It’s a good thing I didn’t study medicine.

Sometimes passion got in the way. Like the final exam I had in my Film as Literature class, which included five difficult essay questions. I can’t remember the nature of the first question, but I think it had to do with the development of “montage,” from Eisenstein’s “Battleship Potemkin” through “Birth of a Nation” and on to the works of Martin Scorsese. I had this topic by the balls. I knew it backwards and forwards and I was intent upon writing everything I’d ever learned on the subject. I remember a friend sitting next to me, seeing my frantic writing, asking which essay I was on.

“The first one,” I repeated.

It was like that all the way until the end of class, when we were asked to turn in our papers. I had written a ten page essay on Question #1. It was perfect. I failed the exam. The teacher told me I got an A+ on that first question, however. And, in some weird way, that was good enough for me.

I’ve had the opposite experience as well, where I’ve saved my semester grade with an inspired, last-ditch essay that even I didn’t understand. That’s the magic of the essay – you don’t always know where it’s going. It’s malleable. It’s not what it seems.

However, I failed my Astronomy final because there was simply no wiggle room in the distance between Earth and the Sun. Fudging numbers doesn’t put a man on Mars.

I did take one science class seriously, however. Chemistry. For some reason I decided I wanted to learn, really learn, what chemistry was about. I figured out the math part and did the lab work and discovered for the first time in my college career what it was like to know, definitively, something. Anything. The liquids turned the colors they were supposed to and the numbers backed it up. It was comforting. Suddenly, I could sleep at night.

I believe there are two kinds of people: numbers people and essay people. I think the numbers people are generally happier. The essay people, well, I know a lot of them. They live turbulent, ill-defined lives. They pretend to know the answers, while knowing, deep inside, they don’t have a clue. They live life without a safety net. They sometimes fall, making a terrible mess when they land.

But when they fall, they generally fall from great heights.

And, before impact, they swear they’d experienced a moment of flight.

Of course the numbers people will tell them they hadn’t left the ground. And the sensation of flight came from the rush of blood to the brain.

They’ll say the sense of being released from gravity is pure fiction.

And the essay people will say, yes, that’s it exactly.

20 thoughts on “SAFETY IN NUMBERS”