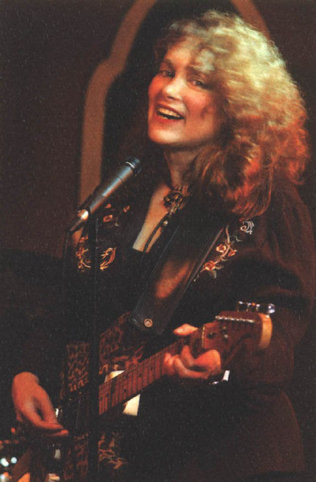 Briefly, a bio: Kathi was not just the lead singer, rhythm guitarist (with her trademark leopard-skin Stratocaster), and heart and soul of Los Train Wreck, she was also a novelist—the marvelous And My Shoes Keep Walking Back to You— plus a contributor and co-writer for a number of anthologies and other books, a founder and the lead Remainderette for the all-writer rock band The Rock Bottom Reminders—which included Amy Tan, Dave Barry, Scott Turow, Stephen King and Ridley Pearson among others—as well as the most deeply appreciated literary escort in the San Francisco Bay Area (perhaps the known world). So Kathi knew a host of writers who loved her deeply and miss her bitterly.

There are a number of tributes to Kathi on the web, and you can access many of them through the Facebook page of her husband, Sam Barry, himself a big-hearted mensch and old soul.

[Luis and I met through Kathi, a friendship that “matured” into a collaboration on a short story titled “Who Stole My Monkey?” for Lone Star Noir, which was selected for inclusion in Best American Mystery Stories 2011, something Kathi got a particular kick out of.]

But this is a post about what it means to be brave. Or as Kathi sometimes put it: “I like to think I’m ready for anything.”

I saw in Kathi many of the same qualities I saw in my late wife, Terri—a fundamental decency, honesty and openness, a focus on others that was always generous and good-hearted. She was also wickedly funny and, yes, ready for damn near anything.

But when you got together with her one-on-one she was always fully present, even when she was sick. It was simply her nature. When you were with her, you were the only person who mattered.

April Sinclair told me that when she and Kathi spoke the Sunday before her death, “She was so warm and caring as always,” even as death was settling in.

And one of the stories making the rounds at the informal wake at Kathi’s and Sam’s house Thursday evening was that, as she wavered in and out of consciousness near the end, she gestured Sam over at one point, had him bend down toward her so she could whisper, “Rosebuuuuuud.”

I hope I can muster half that sang-froid when death comes for me.

A few weeks ago I wrote here on Murderati a piece titled Braver, Wiser, More Loving, in which I said:

In crafting our heroes, we implicitly recognize the need to be a little more than we’ve allowed ourselves to be, recognize that the fault lies within, as does the remedy.

When my wife, Terri, died, I was assaulted with well-meaning advice on how to deal with the loss, a lot of which was largely beside the point. But I saw in those attempts to be kind and caring a message I did indeed need to hear: I couldn’t live with a ghost strapped to my back.

That, in the end, was the message I took away from my grief: I had to find a way to live when the most important person in my life—my best friend, my lover, my bride—had been devoured by a savage, indifferent disease.

And after the battles with despair and rage I decided that each day I would try to be a little braver, more truthful, more forgiving. I thought if I kept it that simple—three virtues: courage, honesty and love—I might be able to manage it. And I’d live up to Terri’s example, for she was the bravest, most devoutly honest and most selflessly caring human being I’ve ever met.

I can’t read those words today, a mere few weeks after I wrote them, and not think of Kathi as well. She too is my hero. If I can be a bit more like her each day, I’ll be okay.

Isn’t that what the heroes in our stories do—inspire not just their fellow characters but us? How often does the hero resist or ignore the sound advice of a crucial ally until that ally suffers terribly or dies, at which point the journey is doomed unless the hero recognizes his error, embraces the ally’s example, and ventures on?

How many of us have lost someone irreplaceable, and felt broken by grief until somehow we managed to not just honor our memories of that person but take them fully to heart, let our remembrance change us?

These days the cineplex is full of superheroes with inhuman powers and mythic echoes, as well as all variety of werewolves, vampires, zombies. It’s almost as though we can’t believe in heroism unless it’s supersized, even while our men and women in uniform perform astonishing acts of courage large and small every day. And women like Kathi live life and face death with incredible gentleness and courage and largeness of spirit.

I can’t see much to emulate in the Hulk. But I see much to admire and imitate in Kathi. I hope I do that. I’ve no one to blame but myself if I don’t.

The time for heroes, as always, is here and now.

I’d love to hear from you on this. Have you lost someone close to you who’s inspired you to be a little better, a little larger in spirit: braver, wiser, more loving?

Who in your life has represented heroism? How has his or her example changed you?

Have you written about that person, or has she inspired one of your characters?

Jukebox Hero of the Week: Here’s a video of Kathi—that’s Harpman Sam, her husband, on the harmonica—with the Rock Bottom Remainders performing her signature tune, “Older Than Him (the Slut Song)”: