Ever watch Monk?  I did.  A lot.  And I miss seeing my friend, Det. Adrian Monk, in part because he made me feel kind of normal.  You see, I can be pretty obsessive.  That wall I painted a couple of weeks ago?  I had no plans on doing that, certainly not on that particular day, and perhaps not on any day.  But once I woke up knowing that the wall needed to stop being white, that’s all I could think about.  I called the paint store, ordered the paint, walked to the store to pick it up, came home, popped open the can, and didn’t stop working until the job was done.  I tried to stop.  I did.  I sat down next to my husband for a snack break, but the thought of all those open paint cans, damp rollers, and that line between dry white wall and wet grey paint had me back up on my feet again.

But where Adrian Monk’s obsessive tendencies were sadly debilitating, I’ve always thought that I have a healthy amount of obsession.  My wall did get painted, right?  I’ve also lost a few pounds lately, doing it the only way I know how: obsession and ritual.  Count every calorie popped into the pie-hole and make sure that number is less than the calories burned.  (Shout-out to my calorie counter, Bodybugg.)  Back at the District Attorney’s Office, I used to crank through misdemeanor-issuing duty by forcing myself to issue cases in blocks of ten before even considering a coffee, bathroom, or hallway-gossip break.  Yesterday, I ran three miles in precisely 24 minutes — not 23:59, not 24:02, but 24:00.  Why?  Because I realized after a mile that I could beat my usual 25:00 pace, but didn’t want an uneven number, so I sped up as necessary to get the digital readout to wind up at 24:00.  No, I’m not kidding.  I actually did that.  Afterward, I looked like this, but without the tats.  Or boy parts. 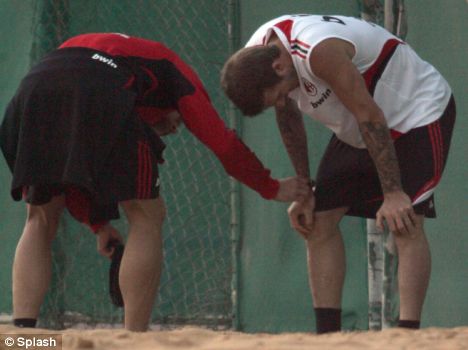 One woman’s discipline is another person’s anal-retentive OCD freakshow.  I know.

But as much as I thrive on ritual, I can’t seem to import my usual habits to writing.  My fellow gym rat, Laura Lippman, recently compared her workout routines to her writing routine, where she puts in a requisite and round-numbered 1,000 words before considering a break.  I know many of you have similar word-count, page, or hours-at-desk minimums.

Inspired by Laura, I’ve been trying to put in my 1,000 words a day.  But where hard, concrete, numerical goals do the trick for me in every other aspect of my life, this time it’s just not working.  Yesterday I walked away from my desk with a mere 489 new words added to the manuscript.  Unacceptable!  I would never hop off the treadmill after 4.89 miles.  4-8-9.  Nothing pretty or round or even or appealing about that at all.

The difference, of course, is that writing requires a different part of my brain.  On a treadmill, I don’t have to think about how to run.  I just put one foot in front of the other and try not to disturb my fellow gym patrons with all my panting and stomping.  Painting a wall is just a matter of moving brushes and rollers around until the color changes.  But words and sentences and paragraphs and chapters and entire stories?  Those require inspiration and voice and sense of character and… choices!

We writers often boast about discipline.  Even I of the undisciplined do strive to write something everyday and never to miss two consecutive days.  But I’m starting to think that walking away from the keyboard can also require discipline.  Last month, I suddenly worked through a plot problem in my work-in-progress while I was staring at the beach in Jamaica.  One of the biggest “a-ha” moments in my new book, 212, came to me during shavasana, or dead man’s pose, in yoga.

“I’m not dead…but I know who’s about to be.” Is it that hard to believe that the art of writing requires you to let go of the part of your brain that likes round numbers?  So now instead of forcing myself to stay put for that 1,000 word limit, I ask myself why I want a break.  Do I know what needs to be written, but would rather play with Duffer or watch American Idol?  If so, I need to keep my behind in the chair and my fingers on the keyboard.  But if I want to leave my desk because I need to think – about character, about voice, about motive, about story – I’m going to start trusting my instincts and turning off my inner Monk.

What are your rituals, successful or failed?  And when have you strayed from them, for better or worse?