When I was a kid, one of my favourite places was the library. I lived on a boat from an early age, which was not exactly conducive to having a large collection of books. Condensation was a big problem, and the pages tended to mildew badly in the winter.

So, I got my reading kicks amid the old oak shelves and the parquet flooring of the nearest public library in Lancaster.

It was there I worked my way contentedly through the crime section, happy to take a chance on an author I hadn’t previously come across because it wasn’t costing me anything to give them a try. And, if I didn’t like the book I’d chosen, I had plenty more book to go at.

My first event as a published author was held at that same library. While I was writing my first book, the recently republished KILLER INSTINCT, I was part of a small local writing group who met every few weeks in another tiny local library in a nearby village, barely larger than an average living room. It’s gone now, more’s the pity, boarded up and abandoned – a victim of local authority cutbacks. The community is poorer for it.

And now the government is turning its attention to another aspect of the UK library system – PLR.

Public Lending Right came into being in 1979, when the Public Lending Right Act gave British authors a legal right to receive payment for the free lending of their books by public libraries, after a campaign that lasted thirty years and was vigorously opposed by a minority of determined MPs. The scheme itself was established three years later. Payment is just a few pence per lend, taken across a sample of UK libraries over the course of a year. And as it’s capped at £6600 (a little over $10,000) it’s the mid-list authors who tend to benefit most.

For authors whose books are produced in small numbers intended largely for the library market, often only in hardcover, PLR is a lifeline. It doesn’t matter if a book is out of print, so long as it’s still being circulated in the library system, and still being read. For the years when KILLER INSTINCT languished out of print, it was the only way I knew people were still reading and enjoying the book.

I feel very grateful to the libraries in general – and Lancaster Library in particular. In fact, the first ‘real’ character I included in one of my books was the librarian there, Andrew Till, who became an FBI agent in FIRST DROP. I was delighted to be able to include him as a thank you for all the hard work librarians do. 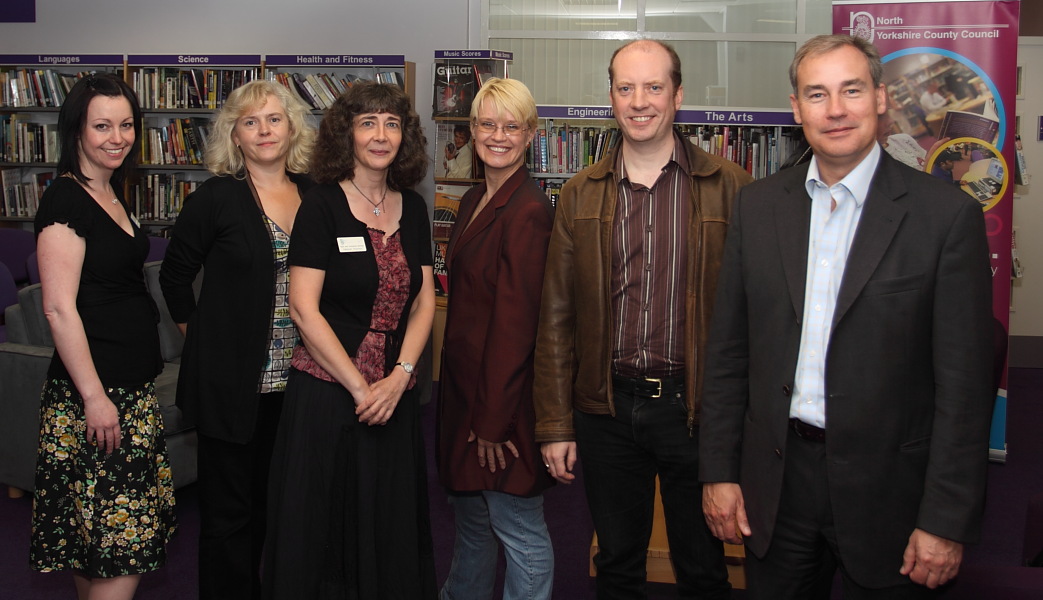 (a recent library event as part of Yorkshire FEVA – Festival of Entertainment and Visual Arts – with the staff of Knaresborough Library [from l to r] Karen Thornton, Wendy Kent, Deborah Thornton, with ZS, and fellow crime authors Richard Jay Parker and Matt Lynn.)

Whenever I’ve toured a new book in the States, I’ve always been more than happy to do library events, but got the impression – rightly or wrongly – that some authors are reluctant to promote the library system. Taken at face value, I can understand this. After all, if a library buys a book and then lends it to a hundred people, that (in theory) is a potential 99 sales lost.

I know whenever I’ve done library events that there’s often a very good take-up of sales alongside them. Many people who use libraries are also voracious book buyers, who borrow books as an extended version of browsing. Many others simply cannot afford to buy new books, particularly hardcovers. I’d rather they used the library, and kept that alive, than scoured second-hand stores and market stalls. Particularly as in the UK struggling authors have PLR as a small safety net.

But now, of course, the cash-strapped government is looking to cut public expenditure dramatically, and PLR is one of the things that’s coming under the microscope by the Department for  Culture Media and Sport. The results of the Spending Review are due to be announced on October 20th.

Meanwhile, there’s a petition you can put your name to, if you feel strongly enough about it. I know, if you’re not a UK author, you may think, why should I? But if you enjoy reading UK authors, please bear in mind that PLR is often the difference between an author being able to continue writing, and having to give it up in favour of more gainful employment.

So, ‘Rati, will you visit and sign the petition, or don’t you feel that authors should receive payment for library lends? What’s your view?

This week’s Word of the Week is quintessential, meaning something it its purest, most concentrated form, the most essential part, form or embodiment of anything. In medieval times, it was thought the world was made up of four corruptible elements: earth, air, fire and water. The heavens came to be regarded as a perfect incorruptible element. In Latin, the quinta essentia, literally, the fifth element.

I’m off on the road from this morning, so I’ll get to comments when I can, but please bear with me.

17 thoughts on “Right or Privilege?”