So it’s October, and for me that has come to mean not just Halloween, but a semi-annual retreat with my awesome writing posse: Margaret Maron, Sarah Shaber, Diane Chamberlain, Katy Munger, Mary Kay Andrews and Brynn Bonner.  At first once a year, then twice, now sometimes three, we go on retreat to the beach or the mountains or some generally fantastic place. We work all day long by ourselves and then convene at night to drink wine and brainstorm on any problem that any one of us is having (and of course, compare page counts!). Murderati’s own Dusty Rhoades now regularly joins us for at least some of the fun.

Our favorite retreat is the Artist in Residence program at the Weymouth Center in Southern Pines, NC. 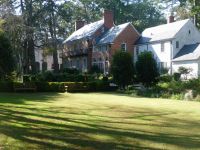 I’ve written about Weymouth here before: the mansion I used for my haunted house in The Unseen, a 9000 sq. foot mansion on 1200 acres that was what they called a “Yankee Playtime Plantation” in the last quarter of the nineteenth century, the fox hunting lodge of coal magnate James Boyd. James Boyd’s grandson James rebelled against the family business to become – what else? – a novelist. Boyd wrote historical novels, and his editor was the great Maxwell Perkins (“Editor of Genius”), and in the 1920’s and 30’s Weymouth became a Southern party venue for the likes of F. Scott Fitzgerald, Sherwood Anderson, and Thomas Wolfe. That literary aura pervades the house, especially the library, with all its photos and portraits of the writers who have stayed at the house.

And yes, it is haunted, ask anyone who’s been here.

When I started plotting The Unseen, I needed a haunted mansion that I could know and convey intimately – the house in a haunted house story is every bit as much a character as the living ones. So of course the Weymouth mansion, with its rich and strange history, convoluted architecture, isolation, vast grounds, and haunted reputation, was a no-brainer. I truly believe that when you commit to a story, the Universe opens all kinds of opportunities to you.

And that’s what a retreat means to me. It’s a commitment to do as much work – and as much magic – as you can possibly do in a weekend, or a week, or if you’re really lucky, two, or in the case of NaNoWriMo – a whole freaking month.

Last time we were at Weymouth I came committed to figuring out the sequel to Huntress Moon. I left a week later with a full thirty-page outline. This week my task was to take my rough draft of Blood Moon and bash through a second draft. I finished yesterday, and today am bashing through the update of my website (a much more daunting task than a book, let me tell you!)

Until one is committed, there is hesitancy, the chance to draw back, always ineffectiveness concerning all acts of initiative and creation. There is one elementary truth, the ignorance of which kills countless ideas and splendid plans; that the moment one definitely commits oneself, then Providence moves too. All sorts of things occur to help one that would never otherwise have occurred. A whole stream of events issues from the decision raising in one’s favor all manner of unforeseen events, meetings and material assistance which no one could have dreamed would have come their way. Whatever you can do or dream you can, begin it. Boldness has genius, power and magic in it. Begin it now!

Well, I’d like to add that it really, really helps to have a whole group of pro writers committed to the same thing along with you.

But you know what makes it exponentially productive?  This place is imprinted.

One of the most prevalent theories of a haunting is that a violent or tragic event leaves a lingering residue on a place, like an echo or a recording. Well, Weymouth has had its share of tragedy and weirdness, but it’s also got an imprint of pure creativity.  (Come on, reread that list of authors above!)  It’s been a writers’ retreat for decades now, centuries, and you can feel it in the marrow of the house.

Layer on to that the sexual energy, just another facet of creativity – oh yes, think about it. Writer parties in the Roaring Twenties?  What was going on in every other room, in the gardens, in the horse stables…?  Did I mention that Weymouth regularly hosts weddings?  We arrived to find a massive wedding marquis in the back gardens, the most elaborate I’ve ever seen, (and I’ve been part of a wedding or two) with the detritus of what was clearly a fantastic and opulent party.

As I write this, well-built men are putting up another party tent in one of the front gardens while another bride is being photographed in the gazebo in back.

It resonates, I’m telling you.

All of this beauty and, um, stimulation, it really makes the pages fly. Also the dreams I’ve been having… well, never mind that.  But one of the most fantastic things about the writing life is that our work brings us into these incredible, layered situations, dreamlike, sometimes, with hazy boundaries between eras and dimensions, between the real and our imaginations. When we’re in the zone, synchronicities spark and breakthroughs become the norm instead of a longed-for rarity.

Writing is a draining thing. You can never really turn it off. So I’ve found that retreats, and the dedicated companionship of other writers, keeps me working deeper, faster, further than I could possibly go on my own.

And I am grateful to whatever providence brought me to my writing group and to Weymouth.

So what about you all? (You all.  Yes, I must be back in the South….)  Do you have retreats, writing groups, places that supercharge your writing?  Let’s hear about them!

— First, for the Cumberbitches out there (you know who you are) I was interviewed by Newsweek/The Daily Beast as a Cumberbatch authority and managed remarkable restraint, if I do say so myself.  Read here.

It’s October, my favorite month, and you-know-what is coming, so I’m giving away 31 signed hardcover copies of my spooky thrillers Book of Shadows, and the book that stars the Weymouth manor I speak of in this post: The Unseen.

An ambitious Boston homicide detective must join forces with a beautiful, mysterious witch from Salem in a race to solve a series of satanic killings.

A team of research psychologists and two psychically gifted students move into an abandoned Southern mansion to duplicate a controversial poltergeist experiment, unaware that the entire original research team ended up insane… or dead.

Inspired by the real-life paranormal studies conducted by the world-famous Rhine parapsychology lab at Duke University.