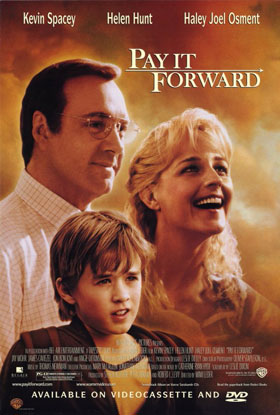 The movie was a big disappointment, but the idea at the heart of PAY IT FORWARD was a sound one.  In the 2007 film, a young boy (played by Haley Joel Osment) is inspired by a social studies teacher (Kevin Spacey) to try changing the world for the better by passing every good deed done to him on to three other people.  He calls this “paying it forward,” and because this is Hollywood, his demonstration of it changes the lives not only of the boy himself, but the lives of his mother, his physically and emotionally scarred teacher, and an ever-widening circle of people completely unknown to him.

I believe some bestsellers are born just this way.

You read a book and love it so much, you pass word on to several friends.  Some of those friends, in turn, alert others to the book, those people do the same, and before you know it, awareness of the book has spread like wildfire.

This is what’s supposed to happen to truly great books.  It’s the fate their authors, by virtue of their skillful writing, most deserve.

But this word-of-mouth chain-reaction doesn’t always happen.  Sometimes, we love a book enough to shout its praises from the rooftops, all right, but we don’t bother.  We either keep our enthusiasm to ourselves, or share it with a mere one or two people, usually by way of a casual reply to the question, “Read any good books lately?” that can all too easily go ignored or be forgotten.

In other words, as readers, we drop the ball.  We fail to do our part to make sure that something terrific we’ve read does not go unrecognized or underappreciated.  We leave it to others to talk the book up and create an audience for it, as if it’s their job and not ours.

I’m as guilty of this as anyone, but not any more.  From now on, I’m going to practice “Reading It Forward”: When I encounter an extraordinarily good book, I’m going to mention it here and elsewhere, and hope the positive word-of-mouth tsunami takes off from there.

Sadly, I can’t do this good deed for friends.  Because — just to cite one example — if I were to tell you Zoë Sharp’s KILLER INSTINCT is one of the best thrillers I’ve ever read, the skeptic in you would think I was only saying that because she’s a fellow Murderati.  And the Read It Forward experiment only works if the person offering the endorsement can be trusted to tell the truth, unvarnished by personal interest or bias.

So as much as I love and admire the works of Zoë and Stephen, David and Alex and Phillipa, etc., the book I’m going to “forward” today was not written by anyone I know particularly well:

CLIFF WALK is a sequel to DeSilva’s Edgar Award-winning first mystery, ROGUE ISLAND, and it’s one hell of a read.  I happened to read it as part of the research I had to do for the panel I moderated at this year’s Left Coast Crime Conference, and I enjoyed every minute of it.  DeSilva worked as a journalist for over 40 years before he turned to crime writing, and his experience in the field makes his two books about Liam Mulligan, a reporter at a dying Providence newspaper, both rich in detail and highly credible.  CLIFF WALK is as dead-on realistic as contemporary crime fiction ever gets, and DeSilva’s dialogue, in particular, is as good as any I’ve ever read.  That’s no joke.

Bruce DeSilva may not get rich and famous writing this stuff — but he should.

Questions for the Class: How about you?  What book would you like to “Read Forward” for the benefit of the author who wrote it and those of us who — in your opinion, anyway — would be well advised not to miss it?

9 thoughts on “READING IT FORWARD”