(We interrupt our regularly scheduled blog post to announce that I’m in New York attending the Thrillerfest conference this weekend, and I’ve just witnessed our own J.T. Ellison receive the 2011 Thriller Award for Best Paperback Original [THE COLD ROOM].  And she was speechless.  No, really, she was speechless — poor baby has a cold and has almost no voice.  You go, J.T.!)

Most of you may not know this, but my last Murderati post was not technically my first.  Way back in March, 2007, I wrote a guest blog here at the invitation of the late, great Elaine Flinn.   (God, I miss that woman.)

The subject of that initial post was a partial WIP I loved to death but couldn’t sell.  I referred to it as my MIaD, or “Manuscript In a Drawer.”  If you’d care to read the whole post, the link above will take you to it in the archives, but here’s the only part of it that’s really relevant to what’s on my mind today:

(My) MIaD is 140 pages of a standalone thriller that has never found a reader who didn’t prove to be indifferent to it.  My agent didn’t get it; my former editor passed on it without breaking a sweat; and the two or three other people to whom I’ve shown it over the years have all responded to it with a collective shrug.

I still can’t wrap my head around the idea that it might.  It is going on seven years old, and the idea from which it sprang is much, much older than that, but here I am, as convinced as ever that this is one great book.

Well, it turns out I was right.  ASSUME NOTHING — the MIaD I was referring to — will be published by Severn House in December, and it is indeed (in my most humble opinion) a great book.

What’s the “finally” mean, you ask?  It means that, while I was right to have the faith in the book that I did back in March, 2007, I was also dead wrong to think that it didn’t suck.  Because at that time, it did.  I was just too in love with the material — and frankly, lazy — to see it.

Sure, I’d read and re-read the manuscript numerous times over the years.  I’d even re-written large chunks of it on occasion.  But at some point, I’d grown so familiar with it — and so tired of looking at it — that I just couldn’t read it with anything resembling an objective eye anymore.  I didn’t have that kind of patience for it.  So you know what I did, at least once, perhaps even twice?  I did the unforgivable.

I sent it out for people to read without having really read the damn thing in months myself.  Can you believe that?

(An email has just appeared in my Inbox from Corbett, asking for my Murderati membership card back.  DELETE!)

Well, you can probably guess what happened.  The book went back into the drawer, unloved and unsold, until a little over a year ago, when Severn House asked for a follow-up to CEMETERY ROAD and that old itch to see ASSUME NOTHING in print started demanding to be scratched again.  So right back out of the drawer the manuscript came.  Only this time, before I let even my new agent see it (my last one hated it, remember?), I set a full day aside, sat down in a comfortable chair with a cup of joe, and read the whole thing.  Twice.

ARGGHHHHHHHH!!!  It was dreck!  I’d shipped this piece of crap to an editor I greatly admire at a house I’d kill to have publish me?

My Constitutional right to bear arms notwithstanding, I don’t own a gun, which is the only reason I didn’t blow my brains out at that very moment.

Oh, the premise I had so much undying faith in was there to be found, all right, as were a handful of great characters and set pieces.  And the prologue, overall, was a fine piece of kickass writing.  But the dialogue and narrative throughout?  They were an embarrassment.  Far below my usual standards, or at least, the standards I’d established since graduating high school.

Needless to say, I got started on a full re-write immediately, and didn’t send the reworked manuscript out to my agent, let alone my editor at Severn House, until I’d read and re-read the damn thing a dozen times.  Each and every page.

Now it was “one great book.”

Great enough, anyway, that both my agent and Severn House loved it, and the rest, as they say, is history.  Here’s what the book will look like in December: 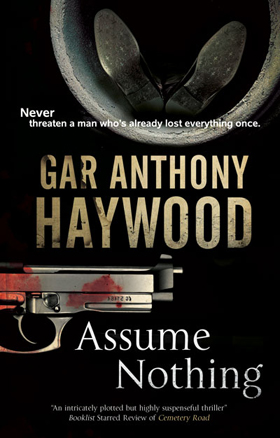 So what exactly is the lesson to be learned from all this?  I think there are several:

There’s a reason so much is posted here at Murderati about the agony of receiving a copyedited manuscript from one’s publisher: We don’t want to read the goddamn thing ever again!  Our minds are already busy formulating not only our next book, but our next three, so the last thing we want to do is revisit, with any real level of concentration, a book we’ve already written, re-written, read and re-read at least a dozen times.  Does that sound like fun to you?

Fun or no, however, reading and re-reading your own stuff — slowly and deliberately — is part of the gig.  And the author who tries to work around that part does so at his own peril.

Questions for the class:  How many times can you read something you’ve written without wanting to scream?  And for the published authors among us, do you ever go back and read your own books once they’re in print?