I believe I may have mentioned it before that I don’t like making mistakes. It bugs me to realise that I’ve left some small error in the final version of a book that I just know people are going to spot and giggle about. And occasionally they do.

I’ve been doing quite a bit of reading over Christmas, and finally got around to finishing the final part of the Millennium trilogy. Wonderful books once I got into them – I can entirely understand their popularity – but chock-full of factual errors, including one involving how a TASER functions which was a major part of the plot.

If you watch any kind of TV cop shows, it’s easy to see where a lot of writer’s mistakes come from – Hollywood. I’m a bit of a fan of TV cop shows, I admit. A couple of episodes of NCIS or CSI, or Without A Trace are what I need to wind down before I head back up to the computer to put in another late-nighter. But it’s purely entertainment, not research.

Because we don’t have ‘live’ TV we watch stuff on DVD instead, which means we can watch old and new series almost back-to-back. For this reason we happened across an old episode of CSI where the plot centred on illegal street racing, a la The Fast And The Furious, and a new episode of NCIS: Los Angeles which also had street racing as its backdrop.

Why is it that so many people get car stuff wrong in books and on screen? I mean, I can understand gun errors. Not that many people have seen a real gun up close, never mind handled or fired one. I didn’t think there was any thriller writer out there who still talks about flicking the safety-catch off a Glock, but I’ve been surprised recently.

And I have to say that the movies don’t help. I’m amazed how many TV cop shows have somebody run out of ammunition at a vital moment, and only realise the fact because they keep pulling the trigger on their semiautomatic and it goes ‘click’ repeatedly. Now, anybody who’s shot a semiautomatic knows that when the magazine is empty, the slide locks back (see pic below and please excuse silly grin – I don’t get to play with firearms much these days). Squeeze the trigger and nothing happens. No ‘click’. Not even once, never mind repeatedly. 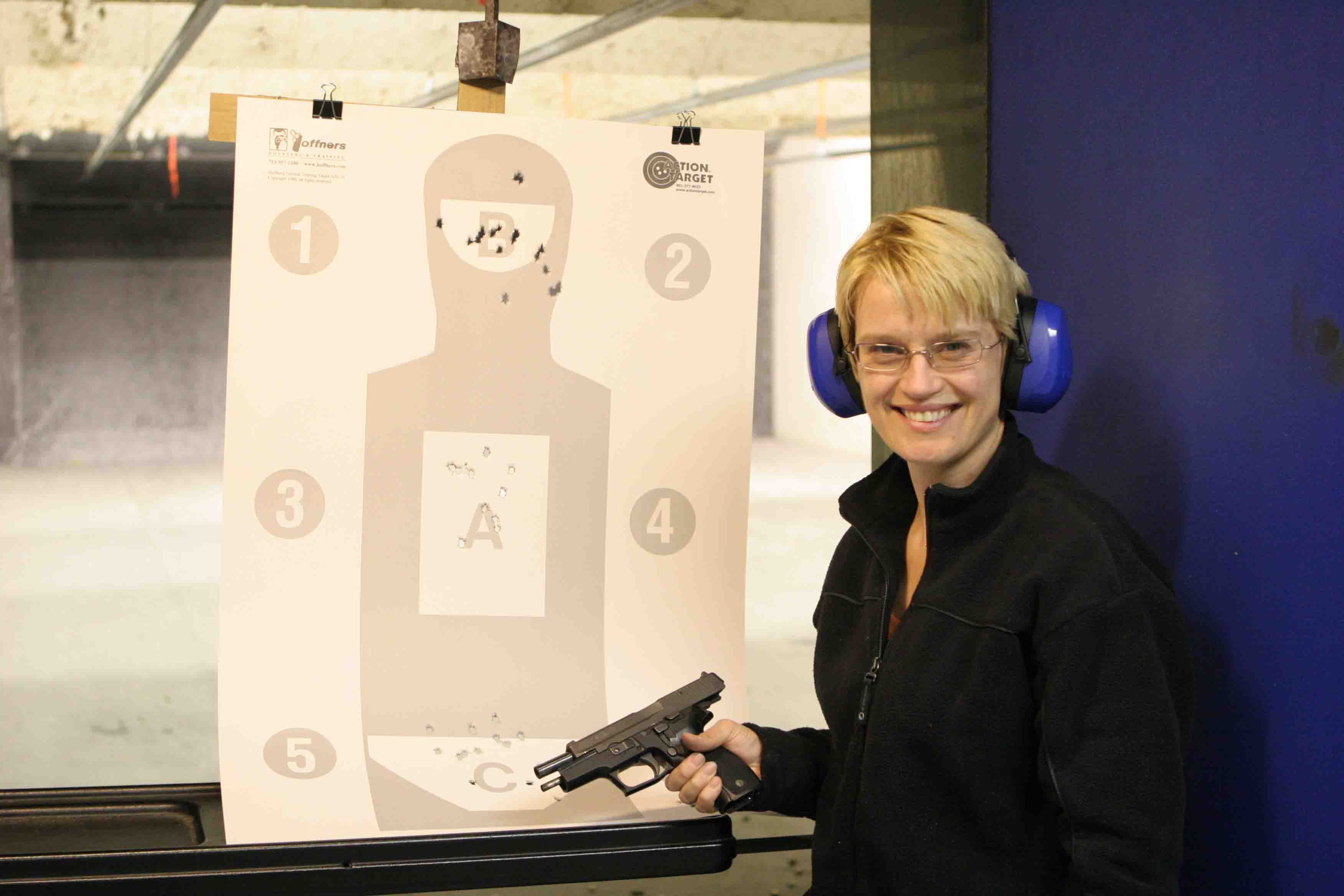 Of course, there are oddities. I had one character using a SOCOM Mk23 covert pistol in one book. This is designed for taking out sentries. When the suppressor is fitted, the gun has a slide lock that prevents the ejection of the brass, so the noise of the mech working does not negate the silencing of the shot. 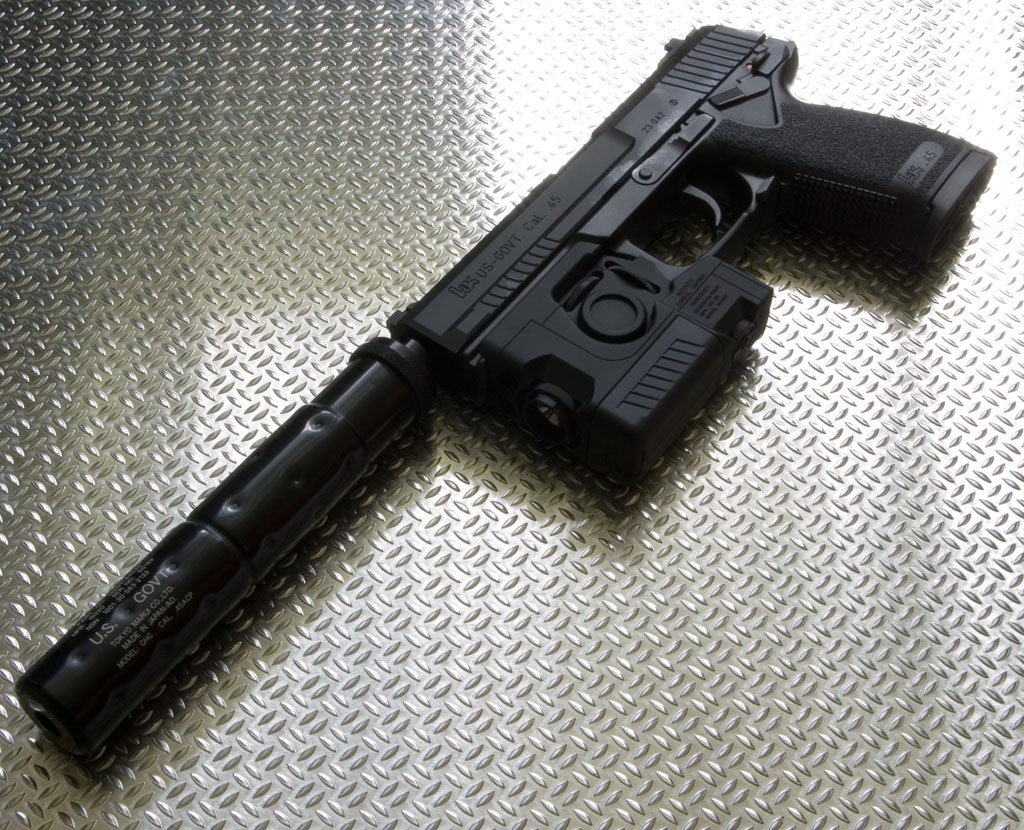 Back to cars. Just about everybody’s driven a car, or seen one, or sat in one. But I can’t believe the writers for one of those cop shows I mentioned came up with the idea that fitting a new experimental-type of battery to a car would cause it to, a) go like brown smelly stuff off a shovel, or b) explode for no apparent reason. I confess that don’t remember a great deal else about that particular episode because I was too busy laughing.

And, for heaven’s sake, vehicles do NOT burst into a dramatic fireball after a few rounds fired into them. Most times, you need to blast away with incendiary rounds before the damn things even start to burn. Erm, not that I’ve tried it, of course …

They don’t blow up from being pushed over cliffs, either. And if the engine is turning over without the engine firing, it’s NOT the battery at fault. Shooting out the radiator will not cause the car to stop instantly, either. Speaking as someone who’s had their radiator holed by a disintegrating fanbelt, you can get quite a few miles before the engine temp climbs to the point where you have to stop and let it cool down, but you CAN limp home if you’re careful.

Medical clangers are even more prevalent. My favourite go-to guy for all queries of a forensic or medical nature is Doug Lyle – DP Lyle MD. Doug is the author of numerous mystery novels as well as forensic books, and I recently came across an old issue of the MWA newsletter where he listed the top ten writer’s medical and forensic mistakes:

Obviously, I’m paraphrasing, but if you want the full run-down you’ll just have to go out and buy one of Doug’s excellent books, such as FORENSICS FOR DUMMIES. I highly recommend it as a fixture for every crime writer’s bookshelf.

So, what mistakes have you come across lately, on page or screen?

And just so you don’t think I’m being entirely without humour today, here’s a wonderful sketch with Ronnie Corbett and Harry Enfield: My Blackberry Is Not Working!

This week’s Word of the Week is culverin, which was an early form of handgun; later a type of cannon with a  long barrel of relatively narrow bore, used in the 16th and 17th centuries, also culverineer.