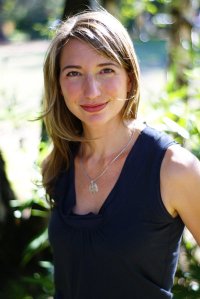 Today I’m – thrilled is the word – to welcome one of my favorite author colleagues, sister thrillerchick Michelle Gagnon.   Michelle is not only a kick-ass writer, she’s a hell of a good time at conferences – from 8-hour bike rides through the Alaskan wilderness to truly appalling after-midnight karaoke (and all on the same day, mind you…), Michelle is about the total experience, and her take-no-prisoners approach to life is reflected in her page-turning, keep-you-up-all-night books. 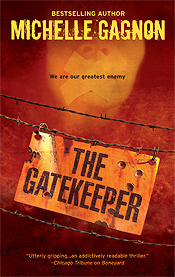 Alex:  The Gatekeeper is the latest in your Special Agent Kelly Jones series, after The Tunnels and The Boneyard.   What’s this one about?

Michelle:  The Gatekeeper has two parallel storylines-one for each of my main characters. FBI Special Agent Kelly Jones starts off in Phoenix, where a right wing Senator is found brutally murdered in front of the State Capitol building. The method of his dismemberment points to a gang that might have been angered by his anti-immigration stance; although Kelly suspects there’s more to it, since it all seems a bit too pat. Meanwhile, Jake Riley is trying to track down the sixteen year-old daughter of a nuclear physicist who has been kidnapped. The ransom demand is not monetary, however- it comes at a cost that no American can afford.

Alex:  That’s kind of a big departure in arena and style of thriller for you.   What possessed you?

Michelle:  The initial idea for the story came to me while I was having dinner with a veteran FBI agent. Ho said that he thought it was more likely that there would be another terrorist attack along the lines of the Oklahoma City bombing, rather than another 9/11. Hate groups have doubled their membership in the past decade, but after 9/11 most of the resources allocated to monitoring them were diverted to watching foreigners on US soil. So: twice as many people, but no one is keeping track of them. I found that terrifying, especially when I started to dig deeper and discovered that one source of low level radioactive waste (the kind the could be incorporated into a dirty bomb) is lost, stolen, or abandoned, EVERY WEEK in this country. That all ended up coalescing into the plotline.

This is something I’ve always meant to ask you, so just pretend we’re in the bar at Thrillerfest or Bouchercon and have been drinking for a while, now.   (I know it’s a stretch…)   You have about as eclectic a background as I do – modern dancer, dogwalker, personal trainer… So what the hell made you start writing to begin with?   And I want real details.   What was the “click”?

Michelle:  I’ve always written- in fact, for years I made a living as a freelance journalist. I worked on fiction on the side, mostly short stories. In 2000 I set out to write a novel. My original idea was to write a college coming of age story- but I kept stalling out twenty pages into the book. One night I was typing away, and suddenly (inadvertently) killed off my main character. I decided to see what happened next- and THE TUNNELS spun out from there. I finished the first draft in a little over a month.

Alex:  Okay, now I’m going to ask you the question I always get:  Why are there so few women out there writing thrillers successfully?

Michelle:  I actually think that recently, there have been a lot of truly impressive entries in the crime fiction field written by women. Tana French, Gillian Flynn, and Chelsea Cain are masters of dark storylines and intricate plots, and they have all proven that you don’t have to go by your initials anymore to get men to read your books. However, in terms of true thrillers, there is still a deficit. I’m not sure why, but it’s an interesting question. And even when awards are handed out (with the exception of your win for best short story last year, Alex!) I find it depressing that women tend to be underrepresented in the thriller category.

Alex:  I completely agree – I have many more favorite women thriller authors than men, and yet you look at the awards lists…  and reviews… depressing is the word.

So in a vaguely related way, here’s a dreaded topic – marketing and promotion.   What are you doing these days that feels like it’s working for you?   What have you given up on?

Michelle:  I honestly wish I knew. I’ve done something a bit different with each book, and I can never tell what works and what doesn’t. I think that especially for a mass market paperback, what matters most is distribution-if your publisher gets behind the book, and puts a lot of copies out there, it will sell well. I don’t honestly know that anything a writer does makes much of a dent when you’re talking about a five figure print run. However, this time around I am running a drawing for a MacBook laptop computer. So far I’ve received a lot of entries, so it seems to be working. (By the way, the contest runs through Dec 31st- more entry details are available on my website).

Michelle:  I know that by blogging on The Kill Zone with six other talented writers, we’ve built up a shared fan base of people who might not have discovered us otherwise. I think it’s a great blog, with lots of excellent posts on craft, marketing, and the life of a writer. Plus we’ll be selling a collection of short stories on Amazon soon, which we hope will bring more people to the blog.

Alex: What’s the next book?

Michelle:  The next book is tentatively entitled “Racing the Devil” (although I suspect I’ll have to change that- I usually do). It takes place in and around Mexico City, and is based on the real life kidnapping of the world’s foremost Kidnap and Ransom expert Felix Batista. Last December he was the keynote speaker at a security conference in Mexico City. He walked out of a restaurant, was pushed into the back of a white van, and hasn’t been heard from since. He’s personally responsible for negotiating the release of more than 100 kidnap victims, and now he’s a victim himself. I’ve based the story largely on that incident.

Alex:  And what are you reading now, for yourself?

Since it’s – yike – December – what are you looking forward to in the New Year?   Do you have any resolutions?

Michelle:  As far as New Years, no plans- but if it turns out to be anything like the past few years, I’ll be in bed by ten 🙂 And I have the same resolution every year—to learn something new. One year I learned to knit, the next to ride a motorcycle. I’m not sure what to put on the docket this year, although I’ve been considering taking up the piano again.

Alex:  Hmm, the piano is one of my resolutions, too… something in the air, I guess.

Thanks a million for stopping by, today, Michelle – and I’m sure the Rati have other questions.

————————————————————————–
Michelle Gagnon is a former modern dancer, bartender, dog walker, model, personal trainer, and Russian supper club performer. Her bestselling novels have been published in North America, France, Spain, Denmark, Norway, Sweden, Finland, and Australia.  In her spare time Michelle runs errands and indulges a weakness for Sudoku and Hollywood blockbusters. She lives in San Francisco with her family.