I’m a middle class white boy from Tempe, Arizona. A pretty nice guy by most accounts. I’ve never had a run-in with police (unless you count the watermelon incident). Never spent a night in jail. Never killed a man in Reno just to watch him die. Yet, I write crime fiction. And much of it is pretty violent stuff.

There is a strange, undeniable sense of fun in writing about bad people doing bad things. Maybe crime fiction allows the humble and law-abiding a chance to stretch our toes over the wrong sides of the tracks. It may also act as therapy against the daily frustrations of modern day living. Tempting as it may be, I can’t shoot the jerk who answers his cell phone in the middle of a movie theater (Although, in my opinion, such an action should be deemed a justifiable homicide). But in my fiction, that guy better turn his ringer off or he’ll get a double-tap to the back of the skull.

Often, I think crime fiction also allows writers to explore their own questions about the nature of violence.

There was this kid I knew when I was a teenager. We weren’t close. He was just a friend of a friend. Being on the short side, he’d been bullied in grade school and Jr. high. Somewhere along the way, he decided he’d had enough.

Over the summer, the kid changed. He started getting into fights, drinking Jack Daniels, and smoking Marlboro cigarettes. He drove fast and had sex with girls who were walking advertisements for STDs. He became a tough guy.

In truth, I really didn’t like him. But I can’t deny having harbored a weird admiration for him. Even as a dumb-ass teenager, I sensed he was broken inside, a victim of low self-esteem. Yet he lived by his own rules and wouldn’t back down from anyone.

As the years passed and friends drifted away, I had all but forgotten about the guy. Then I saw his face on the news. Hikers had found his body in the desert, shot in the head along with his girlfriend. “A possible drug related homicide,” said the newscaster.

This kid was a middleclass white boy, like me, living in a neighborhood just like mine. So why him? Was it a choice? Could I have taken his path? Or was this kid born to die hard?

Occasionally my temper rears its ugly head. The world is full of horribly rude people who think only of themselves. They cut me off, or scream in my ear, or slam a door in my face, and sometimes I want nothing more than to introduce them to my fists.

Then I think of the tough guy in the desert and punch the keyboard instead.

13 thoughts on “Please Allow Me to Introduce Myself”

@Bill_Maxwell_ In the words of Chris Rock: "I ain't saying I CONDONE it--but I understand."

Hey, @WRAL , Brian Mims (@bryanmimsWRAL)
seems a little too desperate to downplay the racial significance of the old Fayetteville Market House. And he seems a little too obsessed with the protesters playing rap music. #nervouswhiteguy

@Bill_Maxwell_ Protesters in Fayetteville, NC just set the old Market House on fire. Considering that slaves were once sold there, I'm surprised the damn thing wasn't burned down years ago. 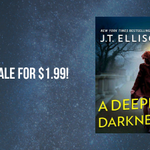 Reply on TwitterRetweet on Twitter1Like on Twitter4Twitter
Load More...