This is my last post of 2010, and as such the more serious themes I was intending to touch on just don’t seem appropriate, somehow. There’s an end-of-term feel about the place at the moment, and emails from a couple of friends – plus a visit to Motorcycle Live at the NEC in Birmingham earlier this month – turned my mind to paraprosdokians.

Confession time. Until recently, I’d never come across a paraprosdokian. No, that’s not entirely true. I’d come across lots of them – I didn’t know that’s what it was, or that there was a word to describe it.

A paraprosdokian come from the Greek and means ‘beyond expectation’. Basically, it’s a figure of speech, in which the latter part of a sentence or phrase is unexpected and causes you to reinterpret the first part.

So, what does a trip to the bike show have to do with any of this? 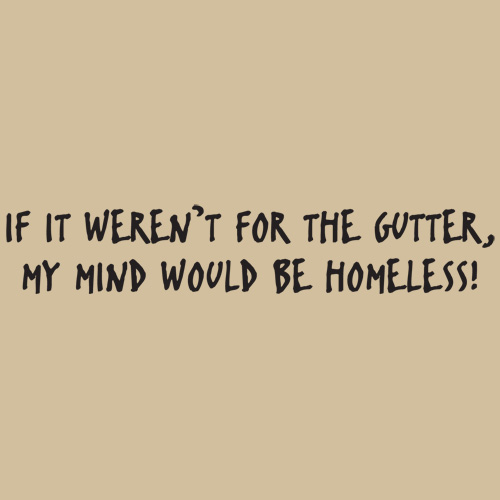 OK, that’s just a nice example of a silly T-shirt from a company called Bad Idea T-shirts and not, strictly speaking, an example of a paraprosdokian. But Groucho Marx was very good at them:

“I’ve had a wonderful evening – but this wasn’t it.”

So was Winston Churchill:

“A modest man, who has much to be modest about.”

Not to mention Dorothy Parker:

“If all the girls who attended the Yale prom were laid end to end, I wouldn’t be in the least surprised.”

I remember a stand-up routine by Emo Phillips years ago which was full of nice examples:

“I like going to the park and watching the children run and scream, because they don’t know I’m using blanks.”

“My family held a wonderful leaving party for me … according to the letter.”

“My father said, ‘I’ll miss you, son,’ because I’d broken the sights off his rifle.”

There are plenty out there, in quote or T-shirt form: 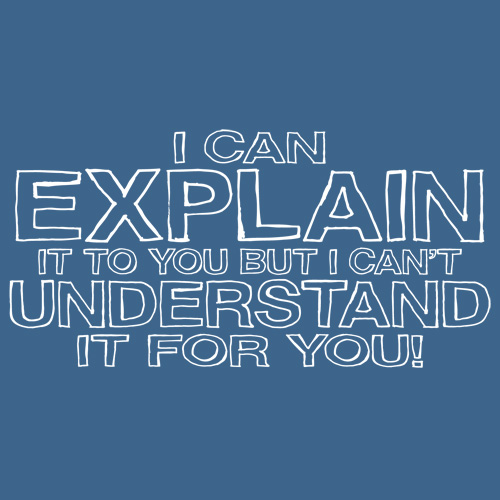 Various friends have sent me some great examples, and here’s a whole load of them (some conforming to the correct parameters more than others):

“I asked God for a bike, but I know God doesn’t work that way. So I stole a bike and asked for forgiveness.”

“I want to die peacefully in my sleep, like my grandfather. Not screaming and yelling like the passengers in his car.”

“Going to church doesn’t make you a Christian any more than standing in a garage makes you a car.”

“The last thing I want to do is hurt you … but it’s still on the list.” 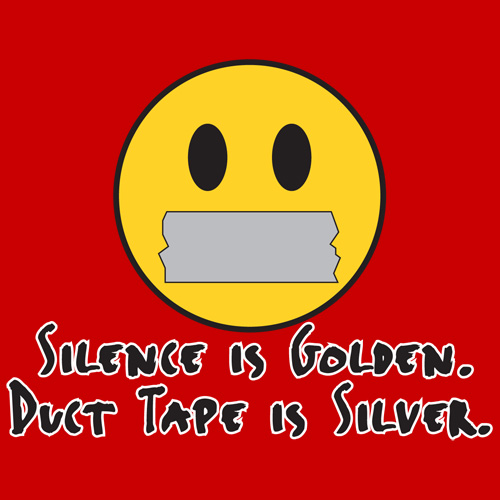 “Light travels faster than sound – this is why some people appear bright until you hear them speak.”

“We never really grow up, we only learn how to act in public.”

“War does not determine who is right – only who is left.” 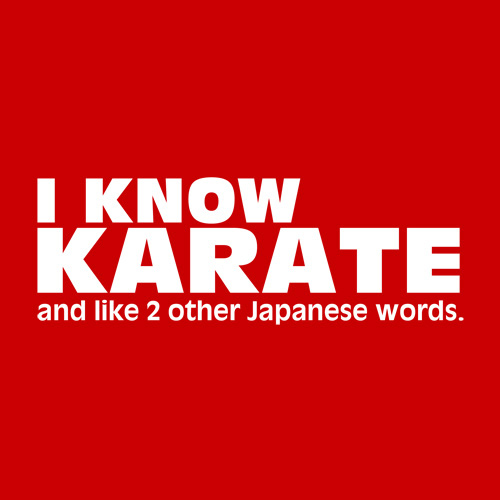 “Knowledge is knowing a tomato is a fruit; wisdom is not putting it in a fruit salad.”

“The early bird might get the worm, but the second mouse gets the cheese.”

“To steal ideas from one person is plagiarism. To steal from many is research.”

“How is it one careless match can start a forest fire, but it takes a whole box to start a campfire?” 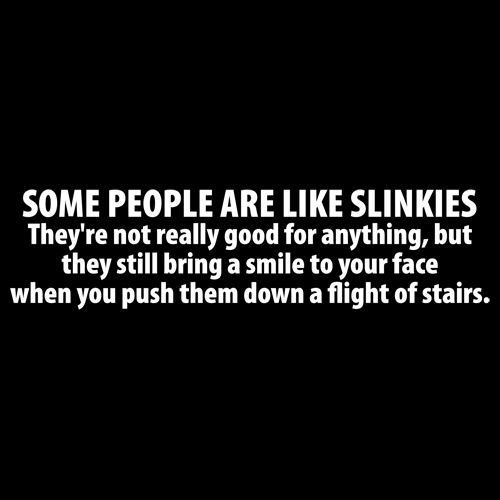 “I thought I wanted a career, turns out I just wanted pay checks.”

“I didn’t say it was your fault, I said I was blaming you.”

“The voices in my head may not be real, but they have some good ideas!”

“Always borrow money from a pessimist. He won’t expect it back.” 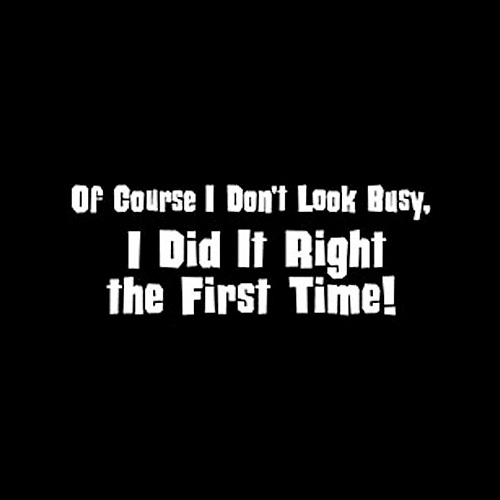 “A diplomat is someone who can tell you to go to hell in such a way that you will look forward to the trip.”

“Hospitality:  making your guests feel like they’re at home, even if you wish they were.”

“Money can’t buy happiness, but it sure makes misery easier to live with.”

“I discovered I scream the same way whether I’m about to be devoured by a great white shark or if a piece of seaweed touches my foot.”

“Always take life with a grain of salt, plus a slice of lemon, and a shot of tequila.”

“The saying is to fight fire with fire, but remember that the Fire Department usually uses water.” 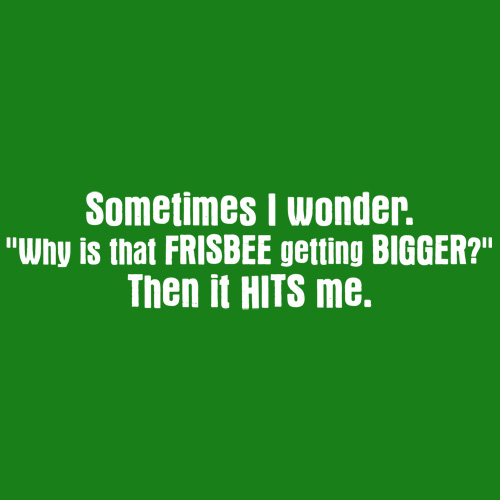 “To be sure of hitting the target, shoot first and call whatever you hit the target.”

“Some people hear voices. Some see invisible people. Others have no imagination whatsoever.”

“If you are supposed to learn from your mistakes, why do some people have more than one child?”

“Change is inevitable, except from a vending machine.”

“Do not argue with an idiot.  He will drag you down to his level and beat you with experience.” 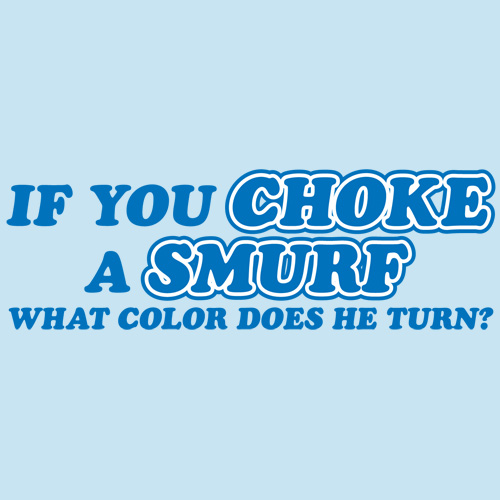 Of course, if a paraprosdokian isn’t clever enough for you, there is always a syllepsis instead, also known as a semantic zeugma, which is a zeugma where the clauses disagree in either meaning or grammar, but where the rules of grammar are bent for stylistic effect.

My favourite example of this comes from the wonderful Flanders & Swann song, ‘Have Some Madeira M’Dear’, which goes:

‘And he said as he hastened to put out the cat,

The wine, his cigar and the lamps:

‘She lowered her standards by raising her glass,

Her courage, her eyes and his hopes.’

Alanis Morissette also uses a syllepsis in ‘Head over Feet’

‘You held your breath and the door for me.’

Charles Dickens used them, like this one from THE PICKWICK PAPERS:

“She went home in a flood of tears, and a sedan chair.”

So did Mark Twain in THE ADVENTURES OF TOM SAWYER:

“… and covered themselves in dust and glory.”

And it’s not just the literary giants who use them. They seem to be a particular favourite device of entrants to the Lyttle Lytton Contest, in which people are invited to ‘compose the opening sentence to the worst of all possible novels’ such as this belter from 2001:

“Monica had exploded, and I had a mystery, and pieces of her pancreas, on my hands.”

So, ‘Rati, do you have any favourite examples of a paraprosdokian, a syllepsis, a zeugma, or just a silly T-shirt slogan, that you’d like to share?

Happy Holidays to everyone, by the way, and wishing you health, luck and happiness for 2011!

31 thoughts on “Playing Around With Words”