I started writing my seventh Taylor Jackson novel this week. This is cause for great rejoicing on many levels, obviously, but the process of beginning a novel is only part of the fun. It’s not as simple as opening a Word file and starting to type. Oh, no. There are steps that must be taken, superstitions adhered to. Some would call this throat clearing, will admonish me to just get to work already. There’s something magical about this time, and I like to keep it sacred.

While the actual book writing started this week, the story has been brewing for quite a while. Since I heard this song on my radio September 14, 2009, to be exact.

I went home and downloaded it, wrote myself a note: “Welcome to London” Memphis Book. That was it. The page was turned and the idea went … not all the way away, but out of sight, into the wilds of my mind. It had a cozy home, obviously well nourished, because everything that happened in THE IMMORTALS and SO CLOSE THE HAND OF DEATH lead to this story. My mind did all the work, subconsciously driving the gossamer threads of my Muse into a cohesive form. In other words, the idea stewed.

Books are strange beasts, and the concept of ideas even more fantastical. Whatever process exists in the creative mind that allows an author to hear a song and almost a year later realize that song forced itself into the very psyche of the stories that were being created and developed into a story in its own right… well, I’ve never been one to sneeze at our minds’ capabilities, that’s for sure.

So back to the process. I revisited the idea several months ago as I was finishing SO CLOSE, knowing I’d have to do a bunch of research to make it work. That research involved going to England and Scotland if I had any hope of the book playing out the way I envisioned. Plus, the book is a Gothic, so it needed all the correct elements to come fully alive, elements that can’t be readily found in my leather chair in my living room in Nashville. I broached the idea to my better half, who is always up for an adventure, bless him. And then serendipity appeared in the form of my debut novel, ALL THE PRETTY GIRLS, which was slated for an August 20 release date in the UK. At BEA, I mentioned to my publisher that I needed to go to the UK to do research for book 7, and they thought it would be a super idea to combine that trip with media for the debut.

Which is how Randy and I found ourselves standing at the top of Edinburgh Castle last week. 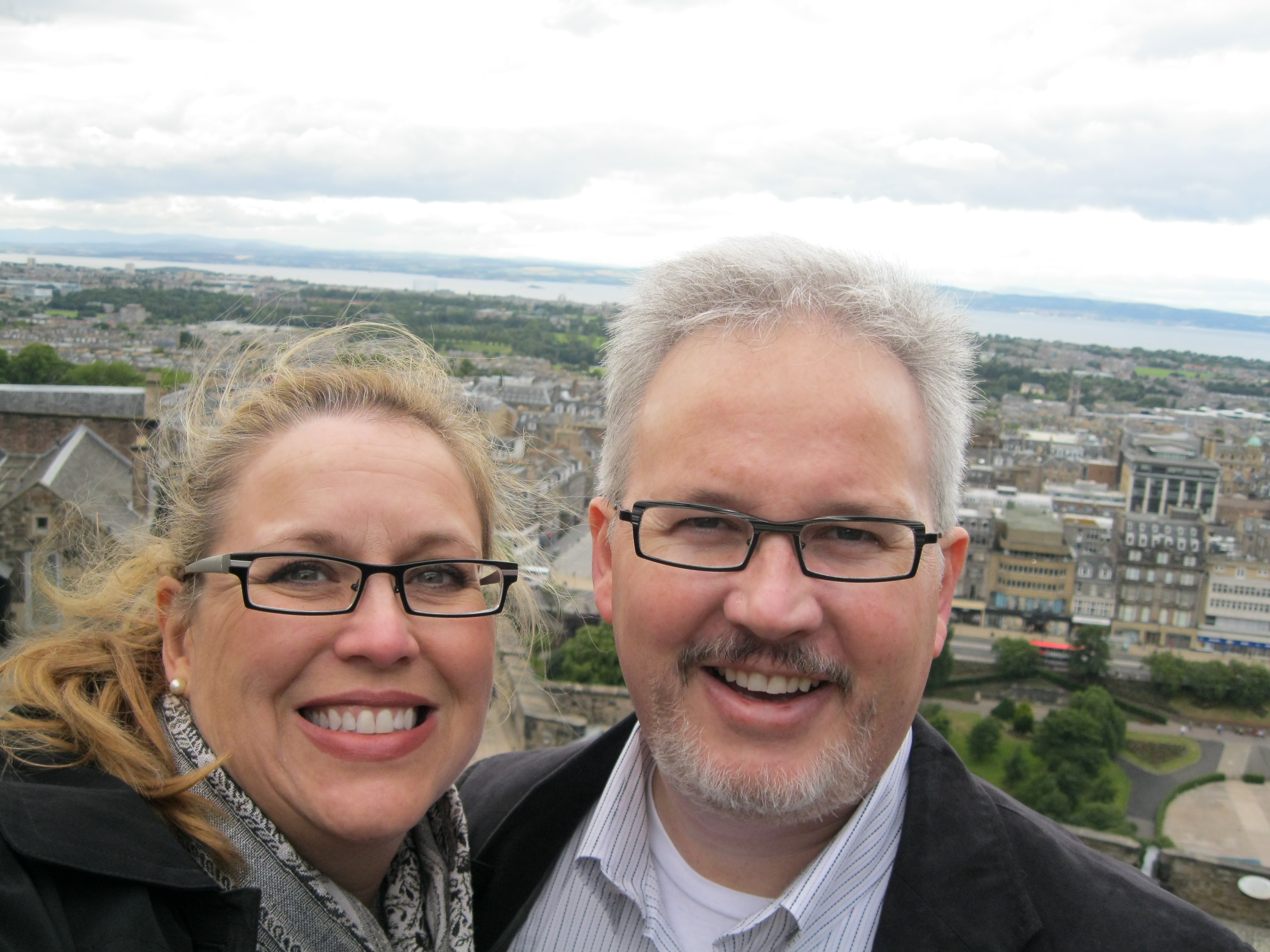 We had a brilliant trip. Following Thrillerfest in New York, which was amazing (Stephen’s post captured the spirit quite well – I’m just glad there wasn’t a full moon over Manhattan, the energy in that crowd would have turned erotic – and this was without our Alex!) we headed to London, hopped the train to Scotland, spent two days touring the countryside – all of it, from Edinburgh to St. Andrews to Inverness to Loch Ness and back, taking page after page of notes, over 600 pictures and three hours of video – then headed to London for the launch party, signings and radio interviews. The trip was only marred by the bronchitis that felled Randy when we arrived in London and followed us home (yes, I’ve caught it and am on antibiotics too. Major bummer.)

The London media machine is a little different than what I’ve experienced thus far in the US. Mira UK threw a Launch Lunch for Paul Johnston (MAPS OF HELL, a fabulous book!) and I that would be more aptly named a party. Wine and champagne flowed freely. We talked about books and life and constitutional Britain and Viscounts and more books. Old friends Ali Karim and Mike Stotter were there, which added to the celebratory atmosphere. There was no expectation of performance that I so often feel here – we were there to celebrate, and celebrate we did. It was very, very cool. Top it all off, we were lunching at The Luxe, which was literally catty-corner from Ten Bells, a Jack the Ripper haunt. Slick! Then we headed to Cambridge, to sign at the legendary Heffers. That’s where Zoë and I found each other. 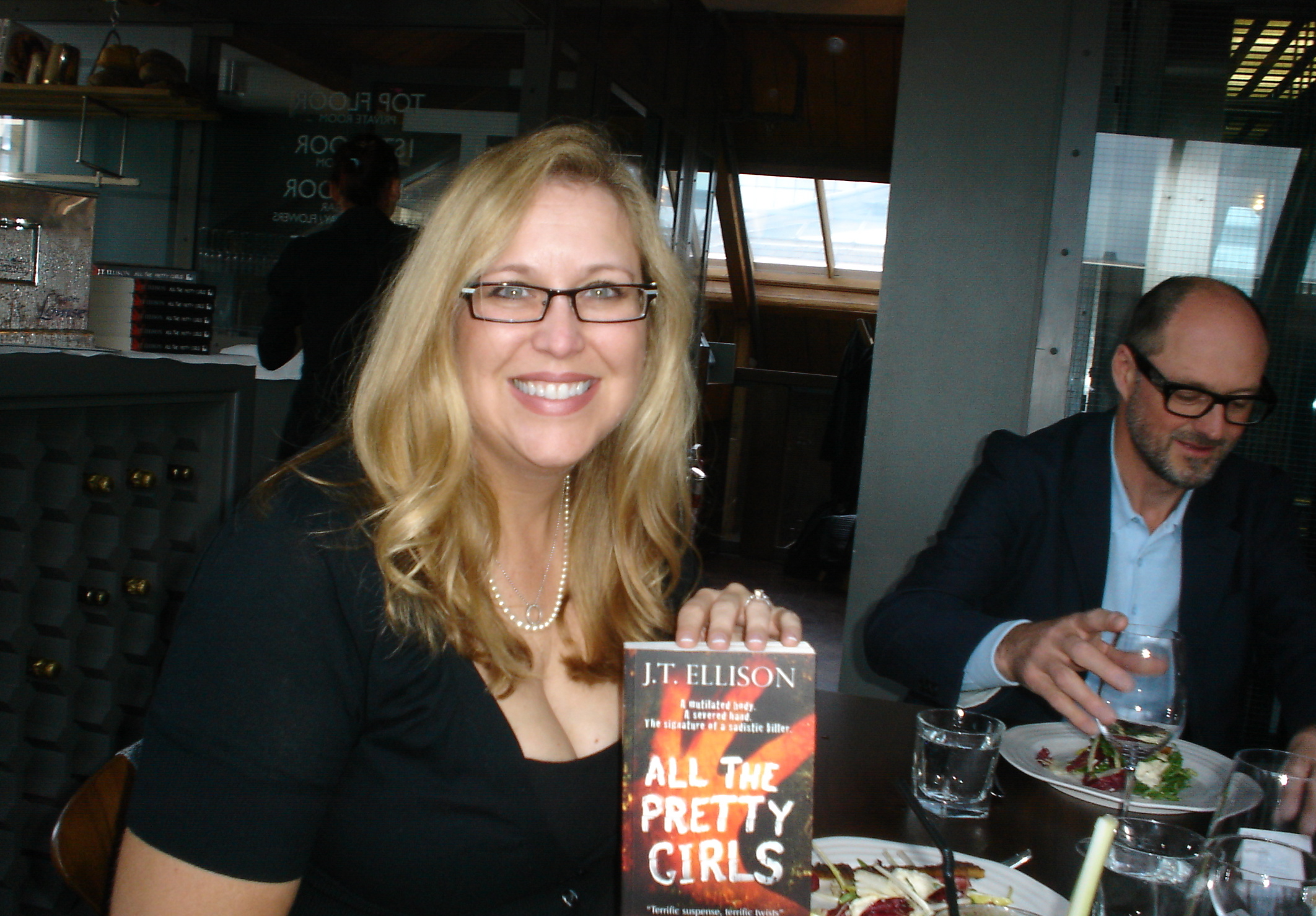 That’s Henry Sutton in the background, of The Mirror, and a novelist in his own right – GET ME OUT OF HERE releases in the US in February, plus he’s got several other titles in the UK. How fun is that?

Back home, marginally recovered, I set about putting all that I had in order – marking up the pictures, uploading the video, pulling togther the remainder of the research, and building my box.

Yes, the book officially exists, because it has a box. It’s labeled with the title (one I really hope stands, WHERE ALL THE DEAD LIE) I’m doing the Art Fact Sheet so we can have the perfect cover. Thanks to the fine folks at Exaclair, I have my purple Clairefontaine notebook, already full of notes, just waiting for more ideas. I pulled the stack of books that I need to read to get in the right frame of mind, I’ve started laying out the characters. I’m using Scrivener, and while I’m not outlining per se, I am doing a bit more planning, simply because I think I have 4 POV characters and I’m moving between countries again, and I find it easier to at least give myself a map if I’m going to do that.

I got so caught up in the excitement that I went so far as to take a quick try at an opening line – that’s when everything came to a screeching halt. It came out in first person. All stop. I don’t think I’m ready to conquer a Taylor novel from her POV in first. We’ll see what happens.

I’m keeping a book journal on this one, so I can see how I feel, what’s working and what isn’t. I’m curious to chart my course more fully than I have in the past – I look back on the previous six books in sheer wonderment. Did I really write them? Or was it some gremlin with blond hair who sits in my chair at night while I’m asleep and slings words onto the page? Sometimes that feels like a real possibility.

Do any of you journal? Book journal or regular daily journal? Do you have any tips to share that will help those of us lately come to the process?

Wine of the Week: Shared at a fine pub called The Queen’s Arms in Edinburgh – goes well with fish and chips – Perrin Cotes du Ventoux 2005

18 thoughts on “Planes, Trains and Automobiles”