Last year I ran the first in what I promised would be an occasional series of ‘guest’ blogs by my protagonist, Charlotte ‘Charlie’ Fox on the subject of personal safety. Charlie had a short-lived career in the Women’s Royal Army Corps, passing selection for Special Forces training, but being dishonourably discharged following a court martial. (Don’t ask.) She then taught self-defence for women in a small northern UK city, and eventually moved into a career as a bodyguard – initially for a London-based outfit run by her partner, Sean Meyer. When Sean was offered a partnership in Parker Armstrong’s prestigious close-protection agency in New York City, Charlie moved with Sean to Manhattan. She has been based there ever since.

Let me tell you, car drivers have it easy – sometimes too easy. There you are sitting in a cushioned little tin box on wheels, largely oblivious to what’s going on around you, but cocooned in your own little bubble of false security.

You think you’re safe in there, but you’re not.

Can’t you tell I’ve spent most of my motoring life on two wheels instead? Especially since moving to New York City. Like any city, getting around by car can be slower than walking and daily parking fees would just about feed a family of four for a month. Riding a motorcycle is the best way to cut through traffic, although since my Buell got trashed (another ‘don’t ask’ moment – ZS) I’m seriously thinking about sticking to travelling either by the subway or by up-armoured Lincoln Navigator.

Personal security on the move begins before you ever leave home. Well before. Never does any harm to walk around your car on a regular basis and check none of your tyres have gone soft, or are wearing unevenly. Tyre failure is the biggest cause of motorway accidents in the UK. And looking at the way some people abuse their wheels every time they park, I’m not surprised. 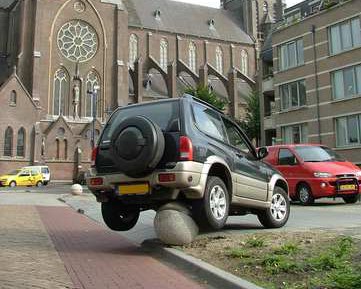 If I’m taking out a principal in their own car, I do a walk-round check every time. I also look for anything underneath or attached to it, often disguised as litter. Doesn’t need to be explosives – on one local sink estate the kiddies thought it was a great laugh to wedge nails against the tyres of cars parked outside the local late-night convenience store, just to watch the tyres go pop as they were driven away. Changing one flat tyre is a nuisance. Changing two involves calling your breakdown recovery service.

Speaking of which, it might just be worth checking that the spare wheel is inflated and has enough tread on it to get you home, and that the jack and wheelbrace are where they should be. Oh, and if your car has locking wheelnuts, make sure you have the key – better to find it now than have to search in the dark, in the rain, at three a.m. on a scary piece of lonely road.

Carry a map. Sounds obvious, but in these days of handheld GPS units a lot of people don’t bother any more. Bad weather like snow will block the GPS antenna from picking up a signal from the satellite and you’ll be doubly lost unless you can still do it the old-fashioned way.

Knowing where you’re going is a fundamental piece of safety advice. GPS is good, but not that good, and not all the time. If you’re going somewhere new for the first time, double-check the address and if necessary instruct the GPS to take you to a precise point on a map rather than the postcode or zip code, which could be anywhere within several miles of your actual destination.

If you’re travelling outside your home country, you have to decide if you’re going to rent a car and drive yourself or rely on local drivers or taxis. If you decide to rent, make sure there’s nothing about the vehicle that obviously marks you out as a foreigner. And learn which local rules of the road you can break to blend in.

In a hot climate air conditioning is not a luxury, it’s a necessity because it enables you to drive without all the windows open. Same goes for central locking. If it isn’t automatic, activate it before you set off rather than waiting until you’re in a dangerous situation – the sound of the locks operating may act as provocation.

In some countries, using taxis can be safer, unless they’re scoping out tourists as potential kidnap victims. Ask your hotel to recommend drivers they’ve used before without incident. Get an idea of the fare before you set out, and don’t flash too much cash when you’re settling up. And always make sure people know where you’re going and when you’re likely to return.

Of course, I’m generally happier in something with armour – it goes with the job. And if the vehicle is fitted with a direction-of-fire indicator so you don’t debus into incoming sniper fire, so much the better. But I’ve been known to stuff Kevlar body armour inside door panels or lay them on seats for instant protection.

OK, I realise that for most people this advice seems like overkill. But certain habits when you’re in your car are good practice, no matter who or where you are.

If you live in a city where you’re often caught in slow-moving traffic and car-jacking is a possibility, get anti-smash window film fitted to the side glass. Put your bag or laptop on the floor rather than on the passenger seat. 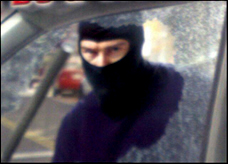 Women drivers should avoid having a private registration with an obviously female first name on it. And never mind valuables, don’t leave any personal items on show when you park. Particularly anything that makes your gender obvious. If you drive a girlie car, though, there’s not much you can do to disguise that.

When you leave the car, bear in mind what time it will be when you come back to it. It may not seem important to park under a light during the day, but after dark you’ll be glad you did. In a multi-storey parking garage, reverse park so you can drive out forwards quickly and easily.

Make sure you have your keys in your hand long before you reach your car, so you’re not standing there fumbling in your bag or pockets. If your alarm has the feature, keep your thumb on the panic button as you approach, just in case. Most alarms or remote central locking systems automatically put the interior lights on when the locks disengage. And I know it’s an urban myth, but check the back seat anyway before you get in.

So, ‘Rati, any tips to add to these from Charlie? Any near misses you’ve experienced or heard about while you’ve been on the road?

This week’s Words of the Week are flotsam and jetsam. Jetsam are goods jettisoned from a ship in time of danger, but also goods from a wreck that remain under water. The word is a contraction of jettison, from the Latin jacere, to throw. Flotsam, on the other hand, are goods lost overboard as the ship sinks and found floating on the sea.

19 thoughts on “Personal security on the move”