Okay, so I know it’s the new year and folks here on Murderati are thinking about what’s to come, and making resolutions—or plans—for the future.

But being the contrarian I am, I thought I’d take a look backwards.  Not at this past year, however, but waaaaay back, to the point in time when this photo was taken. 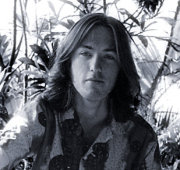 Yes, believe it or not, that’s me.  Somewhere around 1974 or 75.  I can’t be sure.  The photo was taken by my future bride, although at the time no proposals had been made or accepted and the two of us were simply trying to enjoy life as much as two people in their waning teenage years can.

When I look at the guy in that photograph, I remember all the dreams he had.  They were elusive, like most are, rooted in a kind of deluded optimism that youth seems to provide us in massive quantities.

That kid was determined to be a rock star.  Or, more accurately, a singer-songwriter of the James Taylor/Dan Fogelberg variety.  He was rarely without a guitar in his hands, was constantly writing angst-filled songs, and girls would sometimes swoon when he played and sang.

He probably also drove his neighbors crazy at four in the morning.

My dreams back then weren’t limited to music, however.  I also wanted to write.  After reading the work of Donald Westlake and Richard Brautigan, I tried my best to emulate both, and probably failed miserably.  I don’t know, because I no longer have the manuscripts I attempted to write.

There was a third dream, too.  Movie director.  The Rob of those days was a rabid movie fan with a Super Eight camera who thought he knew what it took to put together a film—even though those cameras didn’t have sound.

But the only real strategy I had to achieve any of these dreams was to take each day as it came and try not to worry too much about the future.  It would all work out, I thought, and for the most part it did.  I obviously never became the next James Taylor, and the whole movie director thing seemed more trouble than it was worth, but when I finally grew up enough to know that I actually had to do something in order to make any of these dreams come true, I actually succeeded in getting noticed as a writer.

Now, thirty-something years after that photo was taken, I’m making a living writing novels. So I can look back at that young man and say, hey, kid, at least you got part of it right.

It’s quite possible that I might never have achieved my dreams.  And you know what?  That would be okay, too.

So my question to all of you today is, what dreams did you have when you were nineteen, and did you manage to achieve them?  Do they even matter to you anymore?

I want to thank those of you who took the time to comment in my last post to give me reasons to stick around.  I approached today from a different POV, so maybe I’ll be around for a while…

18 thoughts on “Perchance to Dream”