Last Saturday, I went to the spa to celebrate my birthday. Before going, I decided to pay special attention to my people-pleaser tendencies — those numerous little efforts I make daily to put people at ease or to evoke a positive inter-relational response — because at this point in my life I’m examining many of the things I used to take for granted about myself. (And, just as an aside, let me tell you I’ll be delighted when I can finally move out of this introspective phase!!!)

Anyway . . .
I like being nice; it comes naturally now. It’s fun to make people feel good. And it’s a real asset in my work.

What does this have to do with writing?

The longer I’m a writer, the more I’ve come to believe that this task, this creative calling, isn’t just about putting words on paper and honing/editing them to a marvelous sheen. Being a good writer is also about understanding. It’s about watching and thinking and analyzing and feeling deeply.

As a reader I often don’t give a rat’s ass for structure or plot, but I’m a total sucker for voice. It’s true that I do know some shallow human beings who manage to pull off wonderful literary oeuvres. I also know some fascinating writers  — as people — whose works I can’t read. But the majority of folks that keep me coming back for more are those who are, indeed, in touch with a magnificently unique essence in themselves. That gem of an individual identity comes out in their writing as distinctly as their fingerprints would on a blotter.

I don’t know if this is true, but I suspect that my people-pleaser tendencies have pften nudged me to write things that I want others to like more than paying attention — perhaps — to deeper stories that I need to tell . . . even if they may not make others “feel good.” I’m not saying that Sasha or Darnda aren’t coming from a distinctive place; I’m not putting myself down.  . . . Oh hell . . . I don’t know.

People-pleasing is safe, isn’t it? And it carries such pleasant dividends on a day-to-day level. But is writing the place to do it? Is this another case of marketing vs . . .  whatever? Readers do expect certain things from established writers, but is that voice  — that inner truth that comes out in some writers’ works — the real goal?

As often happens with my posts, I’m merely asking the question. And I’d love to hear your take on this.

I guess my question is:

Does the urge to please people get in the way of a deeper creativity?

Why should we listen to a lot of talk about unifying America from people who can't unify their own damn party?

New: Former President Trump attacked Mitch McConnell as a "dumb son of a bitch" in his speech at the RNC donor retreat tonight, per an attendee.

@JohnCornyn So? He's doing his job, unlike the dancing monkey that was the former guy.

Imagine the yacht exploding and sinking, and all these lovely fireworks going off overhead.... (My brain, when seeing these...)

This display was the day HER DARK LIES was born. And here I thought my family had bought some fireworks to celebrate my birth… https://t.co/b75WP2MmGl 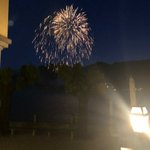