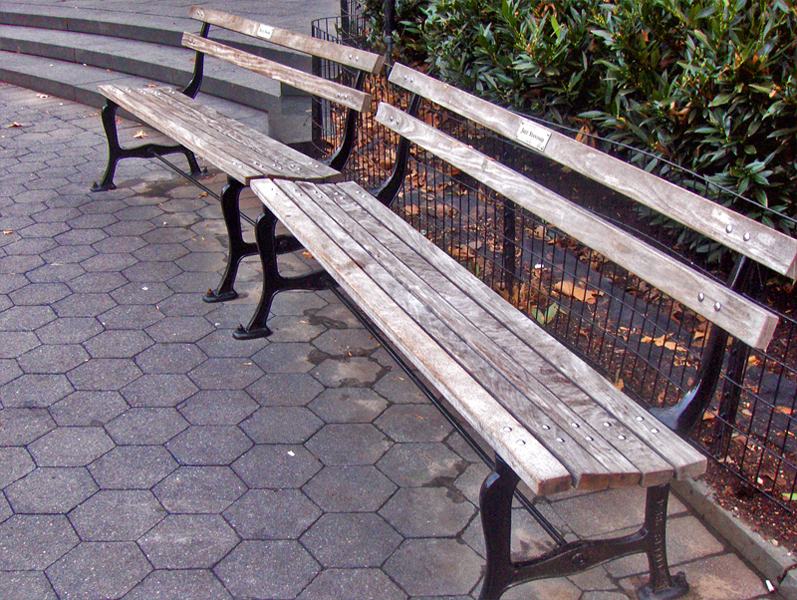 We’ve all talked about eavesdropping before … about how the richest characters and liveliest dialogue can spring from an overheard conversation on the subway, in a diner, in a movie audience before the lights go down.

But I’m here to tell you about another kind of character and conversation, the kind I indulge in on park benches.

It’s not eavesdropping; it’s participating. It’s asking questions I would never be allowed to ask in the normal course of conversation. And it’s about listening to the answers.

The first of these I can remember happened almost thirty years ago. I was returning to my car after a dental appointment that had left my lips as swollen as a Ubangi. Frustrated by work as a young advertising executive that day, and in pain from the dental surgery, I wiped tears from cheeks as I hurried down the sidewalk.

A middle aged black man sitting on a park bench called out as I walked past, “You know, you’d be a lot prettier if you smiled.” He was clean enough-looking, with a bit of gray at his temples, but the filled shopping cart at his side told the real story. I went off on a rant, as only a privileged, overpaid, San Franciscan can do, yelling about how I’d been in a car accident and my Mercedes convertible had a dent in the door, how the swollen lip made it embarrassing to go back to work, how much I had to do at the office when I returned. “There, there,” he said, pulling a sort of white rag from his shopping cart and offering it to me. “Just sit down here and tell me all about it.”

I did. For about twenty minutes. He listened respectfully, sometimes patting my shoulder and continuing the mantra of “There, there.” It was such a cathartic twenty minutes that I felt like I’d just undergone therapy. I got up to leave and handed him a $20 bill in my thanks.

“Don’t go yet. We’re not done.” He got up and bought two cups of coffee with my $20 then sat back down. “Now, what are we going to do to make you feel better?”  He sat with me until I’d drafted a plan on how to get the Mercedes fixed, how to handle the most urgent needs at work, and the advice to suck on a tea bag to help the swelling in my mouth go down.

“See? You’ll live through this. And you really are prettier when you smile,” he said, patting my knee. And he never once mentioned his own circumstances, even when I gave him the opportunity to do so.

I’ve never forgotten him, and now new characters have been added to my park bench pantheon.

Recently, I was smoking on a park bench in Seattle, enjoying the perfect sunshine and the view. A bum about twenty years younger than me approached and asked for a cigarette. I gave him one, in hopes that it would make him go away, but he sat down next to me on the bench to enjoy it. He started the conversation by saying how mad he was that his trip across town to this park had been impeded by protestors and it had taken him so long to get here that he couldn’t use the free laundry provided that day. He did not agree with the protestors, and found a couple of gay members of the group to be particularly hateful.

I asked him what he believed in. Religion? The golden rule? Pull yourself up by your bootstraps? Do unto others? Live and let live? He waffled a bit and was willing to forego most of his stated positions for another cigarette, but finally said, “Look, I’m not a bad guy. I’ve never killed anybody.”

I recoiled. Was this now the lowest common denominator of “a good person? “Don’t tell me what you haven’t done. Tell me what you have done,” I snarled at him. “Have you loved someone? Have you helped someone when you didn’t have to? Have you grown anything? He you fought for a principal not just for a bottle? “

“I used to,” he said. “Now I just try to stay alive.” I nodded. I had forgotten that I had the luxury of seeking dignity as well as life.

On the way home from that Seattle trip, I stopped at a fast food restaurant on I-5. It was too hot to eat in the car and too busy to eat indoors, so I found a bench in the shade outside. A biker pulled up next to my car and  went inside to get food. When he came out, he first tried to sit on his bike and eat, but it was clear that the heat and sloppiness of the meal were getting the best of him. “Mind if I share a bench?” he asked. He had a full beard, hanging longer than his chest. His Hell’s Angels’ club patch was the  full four-crested version of a senior member, including the death head logo.

We started talking about the weather, and then the reason for our trips. His was to join the annual Hell’s Angels gathering in Idaho, mine to take care of my newly-sonless father-in-law. We talked about bikes, about family, about Bruce dying.

He went back in for two ice creams for us and when he returned, said, “I’m sixty-one. I’m the same age as your husband. And this will be my last year riding to the gathering. I can’t trust myself on a bike anymore.” He held out his hand to show me the tremors.

“What I want to know is: if I’m not a Hell’s Angel, what the hell am I? Who do I become when I can’t be myself anymore?”

I thought about that question for the next three hundred miles, but I was asking it of myself. “If I’m not a writer anymore … if I’m not a wife anymore, what am I? What can I be when I can’t be myself?”

I answer myself the same way I answered the biker. “You’ll be alive.”