The more observant among you will have noticed, of course, that I am not Brett Battles. I realise that this may come as a huge disappointment to some of you. (After all, he’s a one-of-a-kind type of guy.)

And, being such, Brett has very kindly allowed me to trade places with him for this week’s ‘Rati blog. I leave for a mini-tour of the States on Monday morning, and will be all over the place for the next 11 days. Although posting a blog here wouldn’t be too difficult, getting to comments might prove more tricky. So, I’ll leave you in Brett’s more-than-capable hands while I’m away. 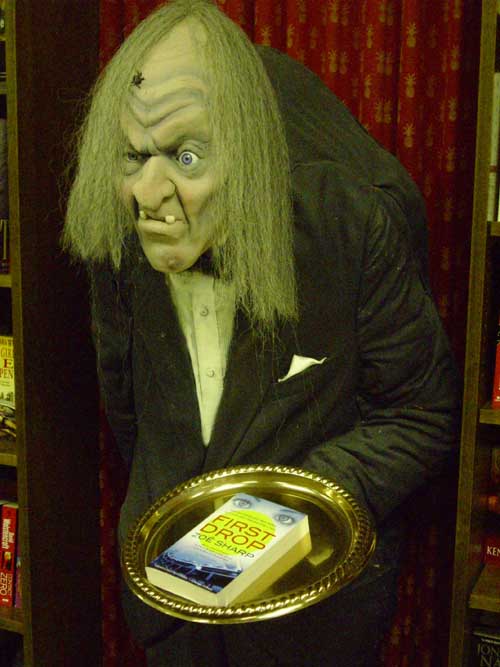 And this pic has nothing to do with Brett, just in case you were wondering. It’s just a lovely one of one of the more unusual fixtures in the Murder on The Beach bookstore in Delray Beach, which I took last time I was there.

Andy and I have always enjoyed travelling. Good job, too, because one way or another we do a lot of it. Packing and repacking for work trips is a common thing, to the point where we usually only start throwing stuff into bags the night before we go. 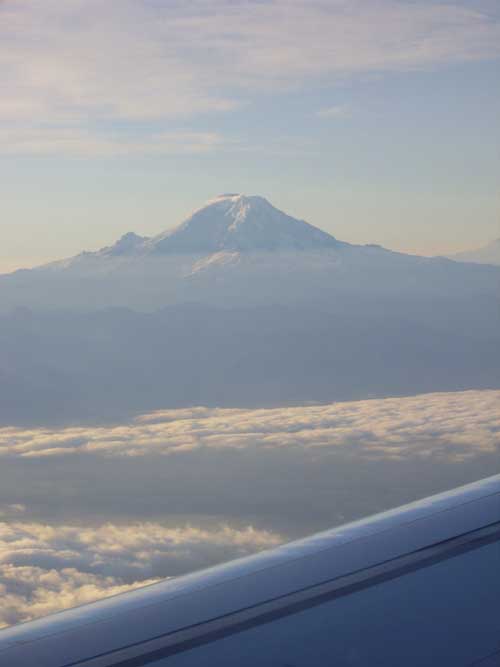 We see a lot of cool sights – mainly from aeroplanes, with a wing in the foreground. Like this shot of Mount Rainier, for instance.

We’ve packed for some weird trips, including one taken in March a few years ago that incorporated both the snowy heights of New Hampshire and the heat of Daytona Beach. It’s the only time I’ve ever taken a (fake) fur hat to Florida. 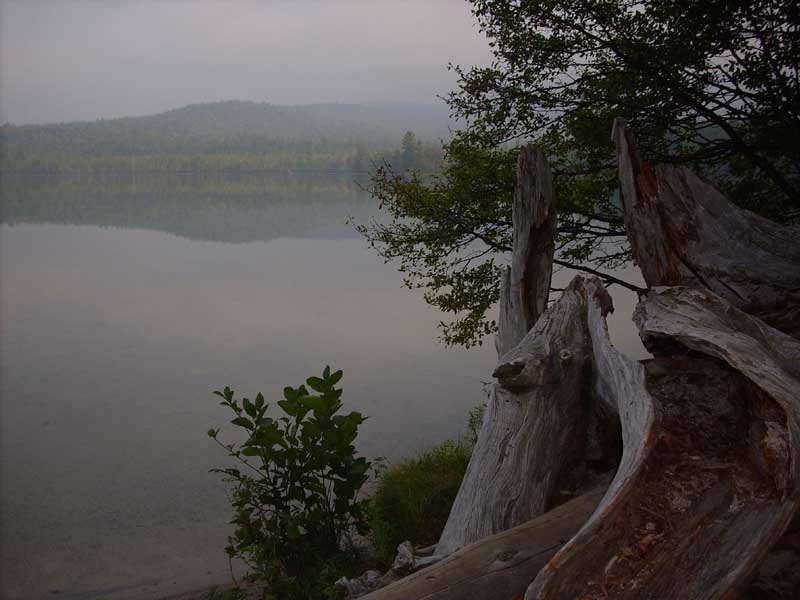 Travelling has definitely got harder these days, and one of the most important things we’ve had to do because we’re flying from the UK, is fill in our Electronic System for Travel Authorisation (ESTA), as well as the usual Customs and Immigration forms. The difference with the ESTA is that we have to do it on-line, well in advance of when we travel, just to make sure we’re going to be allowed in. I have no idea what would happen if we turned up at Arrivals in Houston without having completed it, but I foresee a long wait at the airport and then a somewhat miserable flight home.

This trip started out as a quick visit to Houston to see Busted Flush Press, who are bringing out all the early Charlie Fox books which have never been published in the States before. The very first of these, KILLER INSTINCT, is already out, and the others are planned at short intervals thereafter.

If you’ll forgive a quick itinerary:

I’ll also be calling in to sign stock at Partners & Crime in NYC, as well as flying south to New Orleans to meet up with fellow ‘Rati, Toni McGee Causey, and spend a couple of days mooching round that fascinating city. She’s also promised that she and Carl will take us out to shoot some cool stuff. 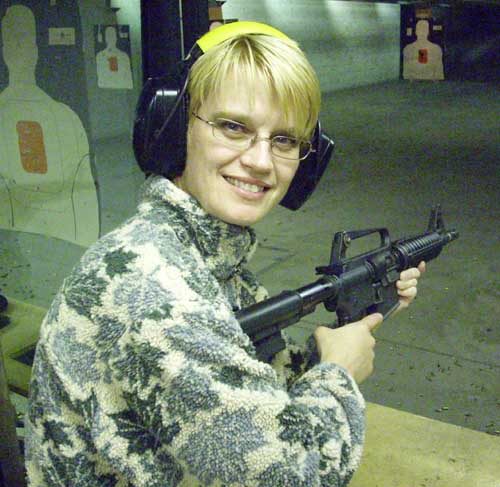 (When someone sends me an email that says, ‘Come stay,’ and then goes on immediately afterwards to list a selection of the firearms they have available, I know we’re going to get along brilliantly…) 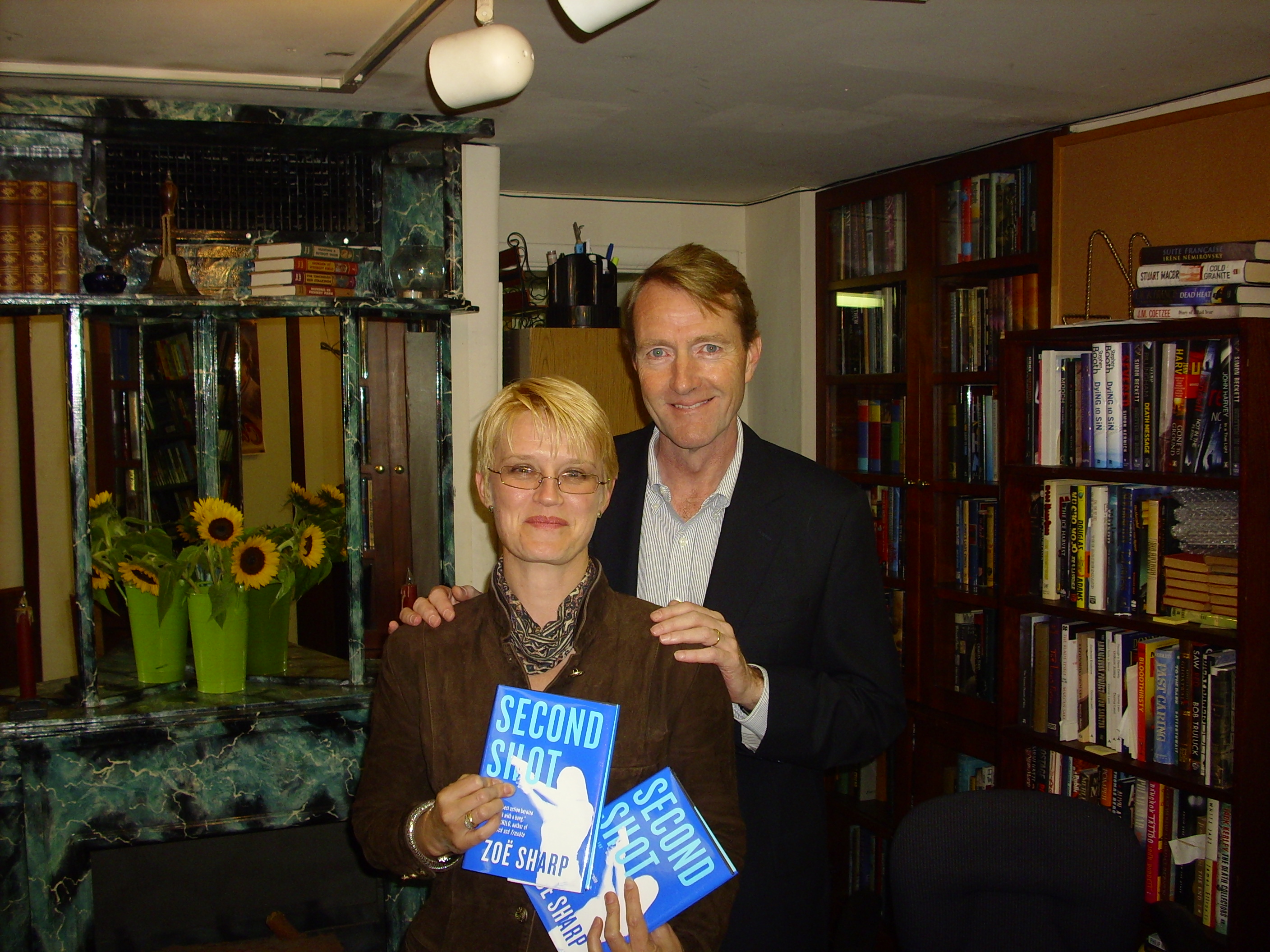 I’m thrilled to little pieces about doing a signing with Lee in NYC, as he’s done a wonderful foreword for the Busted Flush edition of KILLER INSTINCT, for which I am HUGELY grateful. He also generously did an intro for me when I last signed in NYC, for the publication of SECOND SHOT, and here we are at Partners & Crime back then. (Damn, I’m probably going to wear the same jacket again this time – it’s my favourite.) 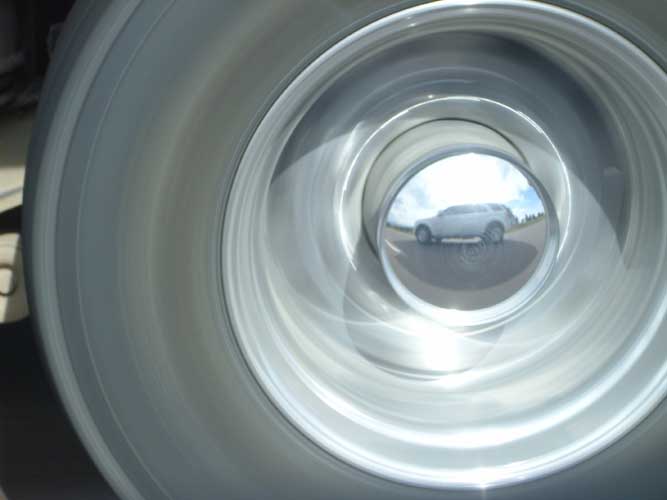 Besides the ESTA, the other thing we’ve had to do before we go is go out and buy shampoo, toothpaste, etc, in teeny-weeny containers. Our existing (UK) travel toothpaste is too big to pass current regulations, as is our shampoo, conditioner, mouthwash, etc.

We’re intending to do all the internal legs of this trip entirely with carryon bags, which speeds up getting through airports and saves stuff getting lost or mis-routed. There are one or two drawbacks to this, however, of which the whole size-of-liquid-containers is one of them. 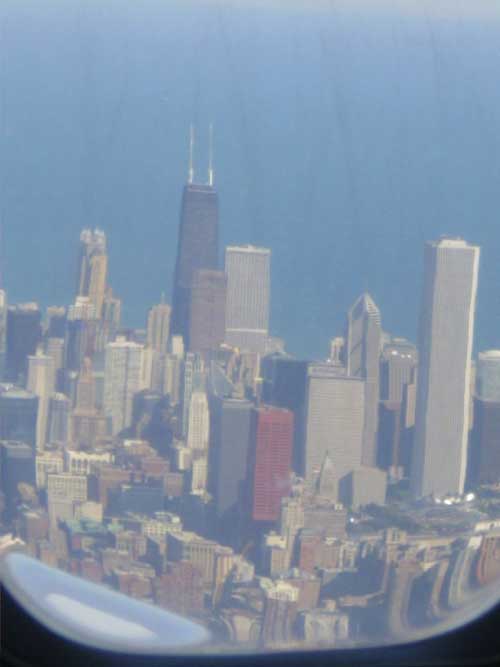 The other is that I will be unable to take my beloved Swiss Army knife with me. It’s not just that I happen to find it extremely useful to carry a knife at all times, but also that it has scissors, tweezers, a nail file, and tiny screwdriver that’s just right for repairing glasses. Still, it has to stay at home. <sigh> 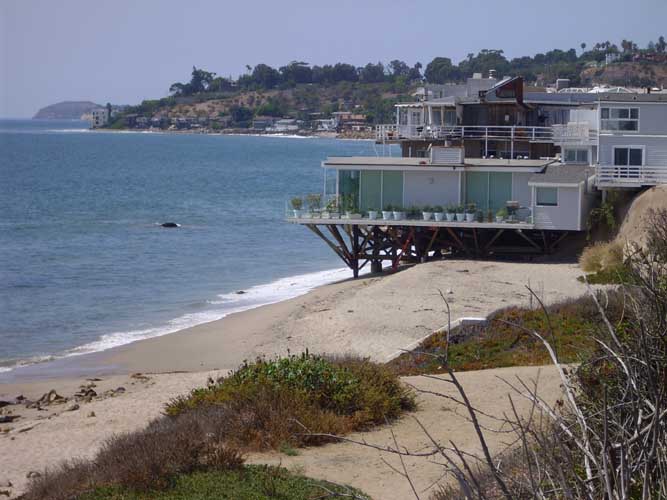 Another must for this trip will be our Avon Skin So Soft. Not because we particularly want delicate, fragrant skin, but because it’s the most effective insect repellent we’ve ever tried – and particularly that it doesn’t say in small print somewhere on the container “avoid contact with exposed skin at all costs” I guess we’ll be decanting that into a smaller bottle for this trip…

Ear defenders are another travel essential for us, as they really cut down the drone on planes, and help make the dreadful sound systems bearable if you do want to watch the in-flight movie, by cutting out some of the more raucous higher frequencies. 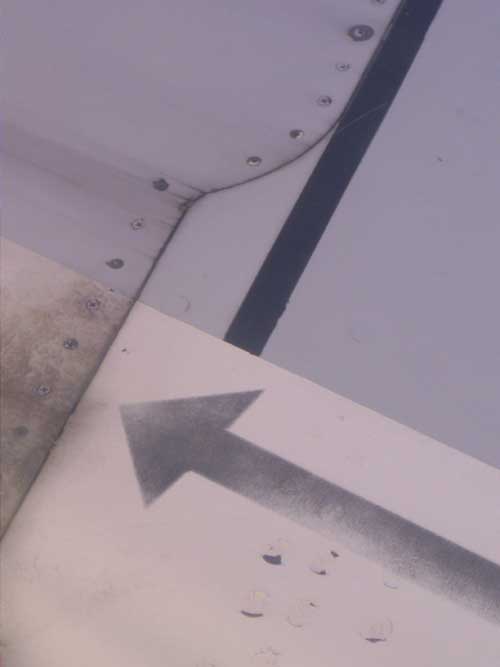 As with previous trips, I’ll be typing out a detailed itinerary, with all the names, phone numbers, email contacts, times and addresses. I’ll also make a careful note of time zone changes, as I nearly got caught out last time around by unexpectedly losing an additional hour driving across Indiana, which meant I turned up for an event at Jim Huang’s The Mystery Company in Carmel with about three minutes to spare, instead of comfortably early!

Then I’ll be printing out two copies, which will be kept in different bags, just in case! 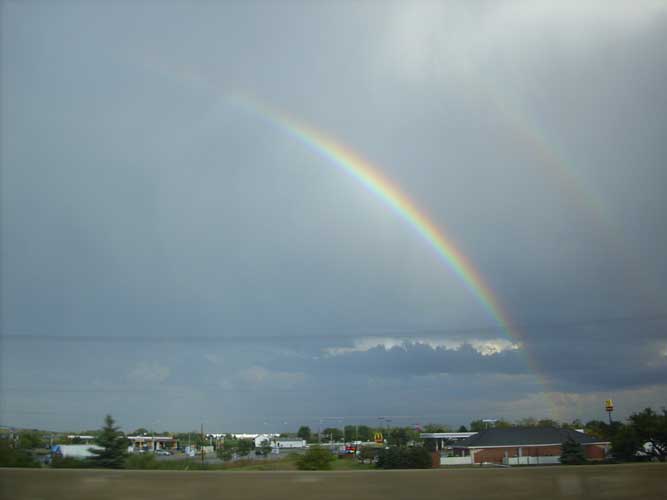 I like the irony of this pic, by the way, which shows a rainbow dropping down neatly onto the Golden Arches…

As soon as we land in the States, we’ll be stopping off at the nearest shopping mall to buy a  Pay-As-You-Go cellphone. Calling to or from a UK cellphone in the States is wildly expensive, so we’ve found previously that it’s much easier to just get a cheapie PAYG and dump it when we’re done. I’ll still be taking my phone, though, because it’s got navigation built in, and that saves lugging road maps for half a dozen different states with us. 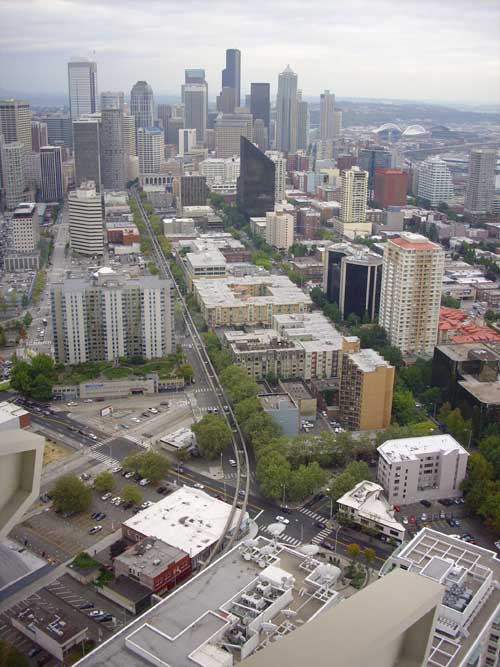 On the luggage front, packing clever is our aim. We always take those roll-up vacuum bags, so we can squash all our laundry into them as we go, which not only keeps it separate from the clean stuff, but takes up much less room.

We usually stop off and do laundry halfway through a trip anyway, which means we can take much less clothing, but also means we have to take colourfast stuff that can quite happily be thrown into a washing machine all together. I seem to remember Andy once left a bottle of sun cream in his pocket before one trip to the laundrette, but fortunately the top stayed firmly attached, and it came out sparkling.

Oh, and pens. I’ll be taking LOTS of pens.

That’s about it, but if you have any travel tips for me, I’d LOVE to hear them. (In fact, I probably NEED to hear them.) And, of course, if you can make it to any of the events, please come along and say hi.

This week’s Word of the Week is gad, which not only is a minced form of God, as in gadzooks, but also means a miner’s wedge or chisel, a metal spike or pointed bar, a spear, an engraver’s stylus, a goad (which is a dialect word for the bar across a Scottish condemned cell, on which the iron ring ran to fasten the shackles, and also to wander about, often restlessly, idly, or in the pursuit of pleasure, to straggle or to rush here and there in a wayward uncontrolled manner. So, that last bit probably sums up nicely what we’ll be doing.

28 thoughts on “On The Road Again (not as Brett Battles)”