BARRY EISLER doesn’t really need an intro.  A Barry Award and Gumshoe Award winner, not to mention being on countless ‘the best of’ lists – his books have been published in twenty countries – his national reviews are top-notch – and have been optioned for film by Barrie Osborne, Oscar-winning producer of the Lord of the Rings trilogy.   A lot of ‘Barry’ mentions here – so maybe that’s a good omen.  But there is more to this very nice gentleman (a term I do not use widely) – there is a razor sharp mind inside this handsome head – and all you have to do is spend a little time with this guy to quickly recognize there are many layers of insights and thoughts swirling round.  Where they’ll  eventually land – is anyone’s guess.  For our sake – let’s hope it will be many more books.  But don’t take my word for it – come meet a side of Barry Eisler you may not know.

Darn!  I wish I could have made this photo larger!  Sigh. I mean – it’s a killer!

EE:  What prompted you to create that great blog – THE HEART OF THE MATTER?  http://www.barryeisler.com/blog.htm  And when the hell do you find the time?

BE:  I realized it was unfair to make my wife continue to endure my constant political rants all by herself.  HEART OF THE MATTER is my support group for her.  The other reason is, I’m a longtime political junkie, and I read, think, and talk politics constantly.  But what really engages me isn’t the kind of venting and acrimony you see on 99% of political blogs, but rather an attempt to honestly understand – and possibly respect – bedrock political differences.  Hence the name of the blog…the point isn’t to yell, vent, insult, etc., but to try to work together to understand what’s really going on for a given issue.  Thinking is hard work, and not getting irritated when someone doesn’t share your politics takes discipline, but I find the whole exercise enormously satisfying.  I wish I had more time for it.

Well, for once – an author won’t get a cute reply from me here.  I’m a big fan of THOTM and seriously urge you to stop by.  The subject matter is always concise, pertinent to what’s going on in the world – and presented in a simple and straightforward manner.  The exchanges are wonderfully civilized and erudite – and from some names that would surprise you.  I just wish Barry would let me bandy his name around the political blogs as a man we need to represent us some how and somewhere.  But damn, he’s such a spoilsport.  He won’t let me.  Do I hear any volunteers out there to give me a hand?  Hell, we could really start a grassroots movement.

EE:  I hear whispers that the next book after REQUIEM FOR AN ASSASSIN is a standalone.  Can you give us a hint or tow?  Or, is this one of those ‘need-to-know basis’ things?

BE:  I do have an idea for a Delilah-centric Rain book, so there will probably be more Rain at some point, but I’ve decided to put that on hold and write something entirely different for #7.  It’s a thriller, it involves Asia, and there will be plenty of realistic action and steamy…er, love scenes, but that’s all I’m saying for now…

EE:  Rumor has it that you’ve patterned John Rain after a real person.  That can’t be you, can it?  I mean, Barry – I’ve always thought you were such a sweet guy.  Not that I don’t adore Rain, it’s just that…

BE:  I’ve never admitted this publicly, but…John Rain is patterned after Paul Guyot.  There, I said it! The burden is lifted!

Who?  Is this someone I should know?

EE:  I love that section on your website – JOIN THE FIGHT.  Your crusade, as it were, against ‘linguistic viruses.’  What is your feeling about writers lately using that venerable musician’s term – ‘doing a gig’ – when describing a book signing?  I know a few musicians – and they’re a little pissed off about this.

BE:  This is the first I’ve heard of it.  But it seems a little silly to me…the point of live music is live music.  the point of an author reading is to sell books.  I know I’m over-generalizing a little, but writing is my ‘gig’, not book signings.  Those are more a means to an end.  But that’s just my opinion; I could be wrong.  On "like," "you know," and the other linguistic viruses with which I do battle, I know I’m doing God’s work…

And He is pleased.

But, like… you know…what I’m hearing from friends (names withheld to protect their careers not their innocence) is that writers supposedly have vast vocabularies and they should coin their own words, man.  Like, you know?

EE:  And speaking of words…which words or phrases do you think you most overuse?

BE:  Elaine, I doubt you could print them here.

Oh, those words?  Probably not.  Betcha they’re some of my favorites too.

EE:  So, I understand the CIA got into a tizzy when your publisher used their official seal on the jacket of the UK versions of your first four books, huh?  Uh, just how angry were they?

BE:  I don’t know that the organization is sentient enough to become angry.  Actually, their objection created a terrific promotional opportunity, which my UK publisher, being a bit more retiring than I, declined to pursue.  I wanted to put big orange stickers on all of the covers declaring that "The author’s previous employer, the CIA, has not authorized, endorsed, or approved the contents of this book."  It would have been great.

Damn, what a lost opportunity!  Too bad you couldn’t have sneaked a few on. 🙂

EE:  What are you reading now?  And which book do you wish you had written?

BE:  I just read Cormac McCarthy’s The Road.  It blew me away – maybe his best yet.  As for a book I wish I had written…there are a lot of books and authors I admire enormously, but I never really think about writing anything other than what I write.  I couldn’t write anyone else’s books, and on one could write mine, and that always feels good to me.

Perfect answer…and one which I will leave alone.  And what timing – I have The Road on order – and am doubly looking forward to it now.

EE:  Which living person do you most admire?

BE:  Nelson Mandela.  If to forgive is divine ( I think it is), he’s as close to a living god as I expect to see in my lifetime.

Yes – I think forgiving is divine.  And I applaud your choice.  How sad that Stephen Biko wasn’t able to do the same.

EE:  What do you consider your biggest challenge?

BE:  Right now, juggling writing, the writing business, and family.  But that’s a quality problem to have.

Ah, yes.  The business part.  A complaint widely heard these days.  Newbies take note.  It doesn’t get easier either.

EE:  Have your many travels to Japan – and your experiences there – influenced any aspect of your way of life or your thinking?

BE:  Probably more than I’m aware of.  Living in Japan certainly gave me the kind of perspective – that is, relative objectivity – about my own culture you can only get by looking in from without.  I also admire (and aspire to) the restraint that is fundamental to so many aspects of Japanese culture.

Restraint.  Yes, a perfect word to describe so much that is Japanese.  From their manners, to their sense of personal dignity and honor.  I too am an admirer of their way of life – and their impeccable manner of simplicity.  Much of our home reflects their artistry – simple pieces, yet offering a daily sense of serenity.  So, Barry – let me know when next you traipse off, okay?  I have a never ending shopping list.

EE:  Okay, let’s get serious now.  Tell us who would make up your ideal panel – and why?

BE:  I think I already did the ideal panel, at the Toronto Bouchercon.  I moderated, the subject was something like "The Bad Guy Protagonist," and the panelists were Ken Bruen, Victor Gischler, Simon Kernick, and Jason Starr.  Duane Swierczynski couldn’t make it, and Reed Coleman, who’s a terrific panelist, was set to stand in, but graciously made way for Victor instead.  We had a blast.

So did the audience – and so did I.  Uh, so did the gals sitting behind me.

EE:  If you could change one thing about yourself, what would that be?

BE:  I wish I were one of those people who needed three or four hours of sleep a night.  It would be like having a whole additional life to live.

If you figure out how to accomplish that – please do let me know.  We could bottle it.

EE:  Barry, darling – something has got to be done about all those swooning women when you’re on a panel.  I couldn’t hear a damn word you said at the last one with all the sighing and moaning going on around me.

BE:  Yeah…someone needs to get ’em new eyeglasses!  That, or Jim Born was up there with me, and the swooning was for him…

Oh, be modest if you must!  Such an endearing trait…but Jim – adorable/macho as he is – wasn’t on the panel.

EE:  Time for your Walter Mitty Dream.  Other than a cozy dinner with moi -what’s yours, Barry?

BE:  I get to do my life over again, and start living abroad, learning languages, and training in martial arts from a much earlier age.

Oh.  I was hoping that…well, nevermind.

Arigato, Barry – for playing On The Bubble.  And Sayonara – but not for long, okay?

20 thoughts on “ON THE BUBBLE WITH BARRY EISLER” 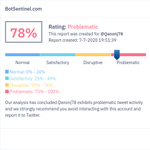 @Qanonj78 @MarshaBlackburn So you or Sen. Blackburn declaring someone else a "foreign or domestic enemy" overrides the decision of the voters? Sorry, BUD, that's not how America works.

@Prof_Bruckner @juliadahl @AprilGDawson Thank you! Off to follow her now. (Hi April. Hope that's OK. And we have an excellent list of mutual friends.)