When I was in high school, I took a career assessment exam, and discovered that I was wired to become either a traveling salesman, a playwright, or an undertaker (well, perhaps a prettier word is bereavement counselor). Imagine my disappointment. Singularly each job didn’t seem that impressive to a teenager, and together they formed a bizarre Frankensteinian figure. What kind of monster would I become?

Well, more than two decades later, I use some aspects of those occupations in my work as a writer and editor. It has become even more evident during these past couple weeks of whirlwind promotional and educational activities.

What’s more Willie Loman than traveling solo to far-flung areas with only a single suitcase filled with books and postcards in hand? I certainly felt that way when I arrived in Norman Mineta San Jose International Airport last Thursday. One thing I soon discovered, getting a fun rental car can ease the bite of loneliness on the road. PT Cruisers are the best and they have a lot of drink holders for all the liquids necessary for a self-financed book tour.

2) San Francisco, or "The City," anchored by the San Francisco Mystery Bookstore. (I’d also include Corte Madera’s Book Passage–a quick and wonderful drive over the bridge. Have that five-dollar bill ready for the toll on the way back.)

I’ve done drive-by or stop-in signings in the past at all these regions, but this time I concentrated my efforts in the first, the Peninsula.

The nice thing about the Peninsula is that it’s usually ten degrees warmer than San Francisco and on Thursday, it was sunny and about 80 degrees. Nirvana. Another strong point is parking is usually easily available in neighboring lots. Double or maybe triple nirvana. Before you go on out-of-town drop-by signings, try to call stores two weeks ahead of time to make sure they have your books on hand. Of course, I didn’t do that (see my last Murderati blog entry for my recent state of mind) and I learned the code phrase "shortlist." I thought "shortlist" was a term reserved solely for awards and honors, but apparently in the Barnes and Noble world, it also means to stock stores with small orders of a certain title. "You don’t have it? Can you shortlist it? Five books–sounds good."

My yellow-brick road in San Jose turned out to be Saratoga Boulevard. As you cultivate your readership, you get a sense of who your prime demographic is. As I passed a mini-mall called Strawberry Plaza and spied a Mitsuwa Market and Kinokuniya bookstore, I knew that I was nearing the heart of my readers. Upon seeing a RingerHut Nagasaki Champon restaurant (what the heck?), I knew that I had entered the Emerald City. The Barnes and Noble there on Saratoga had two copies of SNAKESKIN SHAMISEN, which were promptly sold. On my way back to 880, I stopped by Kinokuniya to meet the manager and had a great discussion about the popularity of mysteries in Japan. He told me that the Japanese translation of Nina Revoyr’s book, Southland, was on Japan’s list of best mysteries. Congrats to Nina and good news for everyone writing about ethnic Americans.

To reward myself for making some great contacts, I went into Mitsuwa Market and bought myself a tall bottle of Calpico, manufactured by Calpis, which for obvious reasons changed the name of its product for the American market. It’s a yogurt flavored beverage that I grew up with in L.A.–so, in a sense, my comfort drink.

I did the same after my gig at the Clark County Library in Las Vegas on Sunday. I drove into downtown Las Vegas and headed straight for the California Hotel and Casino, where I ordered a bowl of saimin (Hawaiian noodles) with haupia (coconut pudding) to go along with the Ross MacDonald book I was reading. If this isn’t the life of a mystery author, I don’t know what is.

I’ve never written a play, but I’ve been in my share of plays in college. (BTW, I would recommend all aspiring writers to take an acting or speech class–so helpful for those speaking engagements.) So the thing about playwriting vs. book writing, playwrights have a lot more interaction with other people, including not only the director but the actors.

Although I’m in my soul of souls introverted, I do like people in reasonable doses. So it’s been nice not only to meet booksellers on the road, but also other literary folks at conferences and seminars. Before I left for my out-of-town book tour, I had a great time with people at our planning sessions for the inaugural Asian Pacific American Book Festival, scheduled for Los Angeles on May 12, 2007 (so put that on your calendars). It was great to hang out with old friends–David Mas Masumoto and others–as well as hear dynamic speakers such as Shawn Wong. I moderated a publishing panel, which included Patricia Wakida of Heyday Books, Dana Goldberg of Children’s Book Press, agent Sandra Zane of Global Literary Management, agent Taryn Fagerness of Sandra Dijkstra Literary Agency, and Philip Lee, cofounder and former publisher of Lee and Low Books.

Some topics of interest: Taryn advises newbie writers seeking agents to place a positive blurb from a bookseller in their query letters–what a great idea. And for those who underestimate the power of reviews, Philip explained how the first children’s book Lee and Low published–BASEBALL SAVED US by Ken Mochizuki–sold half a million copies after a full-page review in the New York Times by a sports writer! Amazing.

There’s a lot of grief and loss involved in getting a book published. Loss of privacy. Grief over what you didn’t include but should have. Final surrender of the manuscript to the world. I won’t even go into the tragedy involved in selling the book.

One of my goals in creating my character of Mas Arai was giving a name to the unnamed gardener in movies like "Chinatown." And not only a name, but a voice. If you think about it, that’s what an undertaker or bereavement counselor should do. Not only help with the grief but also celebrate a single life.

Three specific people who attended my reading at Kinokuniya Bookstore in San Francisco’s Japantown made a profound impact on my husband and I. One was a man named Isao, a retired photographer who used to work at the College of San Mateo. He had followed the whole Mas Arai series and was now in the middle of SNAKESKIN SHAMISEN. I could tell that he experienced great joy in reading references about Japanese American history and culture, pieces of his own life. The other was a woman about my age with long, flowing strawberry blond hair and hazel eyes. She was originally from Pasadena, but had relocated to San Francisco. As we talked, I discovered that her grandmother was from Okinawa, the subject of SNAKESKIN SHAMISEN. She was with her nephew, a medium-framed young man with short-cropped blond hair. They, along with other relatives, would be traveling to Okinawa later this year.

We authors want as many people as possible to read our books, but we may have an ideal reader in mind. I think I met three of them in San Francisco on a rainy Friday evening.

1) Meet fans/readers/booksellers and be reunited with old friends. (A shout-out to my Stanford buddies Russell and Mark–great to see you guys. And it’s always good to spend time with the kind folks at "M" is for Mystery and the San Francisco Mystery Bookstore. Thanks also to Kinokuniya’s Richard Matsuno and the Clark County Library’s Suzanne Scott.)

3) Have an excuse to buy new clothes. (Obviously the best reason. After so many years being content to work in T-shirts and sweat pants, I can now break out on occasion to buy real clothes! Now mind you–my favorite TV show these days is WHAT NOT TO WEAR on TLC, so be aware of how shallow and cruel I really am.)

FINAL TWO WEEKS OF SPAM: Who says we aren’t doing some great things at Murderati? Remember last week’s SPAM dilemma–a reader had lost a recipe for her beloved Touchdowners. Well, another reader, Janet Cearley, has come to the rescue with this e-mail:

The recipe which I have (also a childhood favorite) is made with bologna, but I think otherwise it is the same.

Grind bologna. Add other ingredients and mix well. Spread on hamburger buns and wrap in foil. Bake at 325 for 25 minutes.

Thank you, Janet! If I’m aiding people to recreate their childhood comfort food, what’s next? Evil E (also known as Elaine Flinn) giving advice to the lovelorn? Anything is possible.

And for those of you who’ve had enough of the Spam, rest assured, it’ll be over in two weeks with the winner being announced on June 7!!! So send your entries in to nhirahara@juno.com. And like always, see the website for more info.

11 thoughts on “Notes from the Underground”

Words to live by.

Not one of us could think of a time when talking to the cops helped someone avoid charges or where shutting up hurt them.

My son enjoying the beauty of our home state. In a boat he built himself. Rowing Montage 2019 via @YouTube

Cal Newport is always on my best of list when he has a book out, mostly because I admire how he stares into the digital abyss and finds a path for us mere mortals to navigate. I appreciate the thought behind this book—how can we find ways to make the int… https://t.co/Y3rogtn31k 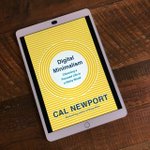 @momjeansplease @___ Here lies JT, she was always looking for herself.