First, for the fun part of this blog: winners. When I swapped blog days with David Corbett, I said I’d send five people a copy of my digital novella – in print because of a promotional thing I did for RWA and ITW. The winners are:

If you live out of the USA or would prefer a digital copy, I’ll send you one. If you want it in print, I have one for you! Either way, I’ll take care of it when I get back from NYC on July 11. Email me at Allison@allisonbrennan.com with your preferred format and snail mail address, if applicable.

Now, for the rest of the blog.

Again, Alex and I are connected by an unseen psychic chord because I, too, wanted to talk about e-books. (Alex, just stop getting inside my head! It’s getting REALLY creepy.) I could write thousands of words on this topic but decided that because I’m in New York City and in a fabulous mood, I’ll postpone it for another day.

So instead, about the Romance Writers of America conference.

No conference is perfect, but RWA comes pretty close. With over 2,200 published and unpublished writers in attendance (total membership tops 10,000, with 20% published,) RWA has been putting on huge conferences for years. We usually have a fantastic speaker for opening session (this time THREE fabulous authors in a panel—Steve Berry, our own Tess Gerritsen, and Diana Galbadon.) I missed it because I was having breakfast with my friend and mentor Carla Neggers, who’s among the smartest people I know.

I rarely go to workshops anymore, though there were some I wanted to hit—like my friend Candace Haven’s “Fast Draft: Writing the First Draft in Two Weeks” which MANY people told me was the best workshop they’d attended this year. (I used to write fast drafts, then would go back and edit. Now, I try but can’t. If I know there’s a problem, I can’t move forward. It’s driving me crazy.) We had authors from #1 NYT bestsellers down to aspiring writers giving workshops on pretty much anything, mixing genres, the business, e-publishing, craft, contracts, you name it. I missed them all. Time to order the audio disks for the car!

But the one thing I have always loved about RWA is the literacy signing.

This picture is less than half the room. 500 published authors selling books donated by publishers where all the proceeds go to a national literacy organization. The event is open to the public, so the authors usually send notice to all their fans. It’s vibrant and exciting and really neat to meet readers in the different cities RWA has their conferences. Thousands of readers waited in line for hours before the doors even opened. Until this year, we’ve raised over $690,000 for literacy. I suspect we raised over $75,000 this year alone.

I have always wished that ITW had a public signing event at Thrillerfest. Currently, we have small singings twice a day with the speakers/panelists from the morning/afternoon panels and events. That’s great—but no one from the public is allowed. (Largely because they’re generally pretty crowded.) A public event would not only give exposure to ITW and the attending authors, but promote the genre as a whole. Whether they model it after RWA or come up with their own unique program doesn’t really matter, I’m sure they’d do something equally as fabulous.

I’ve mentioned this desire to different people, and there have been differing levels of interest, and I’ll once again bring it up to someone, sometime next week as I roam the halls of the Grand Hyatt. Thrillerfest does a lot of things right and I love the conference; someday, I hope we have a signing open to the public.

Speaking of signings, as a mass market author I don’t do a lot of signings. Publishers rarely (if ever) pay for a mass market author to tour, and it’s not really cost effective to do it ourselves. But on occasion I sign locally, or with groups of authors. Or, sometimes I just attend author events, like when my daughter Kelly begged me to take her to San Francisco (2 hour drive) to hear three of her favorite authors (Libba Bray, Meg Cabot, and Maggie Stiefvater) speak and sign. She brought her favorite books with her, and bought a couple there, and even though Kelly is very shy and hates having her picture taken, I got her to pose with Libba Bray with the promise I wouldn’t post it on Facebook. So I’m posting it here:

Yesterday, I spent nearly five hours at the Algonquin Hotel—three short blocks from the Marriott where Toni and I stayed for the RWA conference—where I worked on my copyedits, had a bite to eat, and drank a glass or two of wine. I can see why it was a popular spot for writers–I could write at the Algonquin every day. Matilda is the resident cat—this is Matilda the Second. 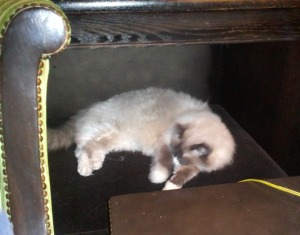 After I posted this picture to Facebook, my cat Nemo sent me an email, hurt that I didn’t post a picture of him (even though he’s home and 3,000 miles away) and instead cooed over Matilda, so this is Nemo on my research shelf before my mom came over to organize my bookshelves:

And finally, here are a couple pictures from my field trip as a role player for SWAT training. Yes, we were tackled by SWAT. Yes, it was fun. Yes, I can’t wait to go back. But in addition to the “covered-pile” hostage exercise I was part of, I was able to observe live ammo drills/hostage rescue and close quarter drills from a catwalk, which was nearly as much fun.

Toni and I are moving over to the Thrillerfest hotel today, but I’ll be back tonight to answer any questions you might have about RWA, Thrillerfest, book signings, or role playing with SWAT. Or anything else you feel like chatting about!