I sat here gobsmacked while watching the LSU win over Tennessee and for those of you who don’t know me, I’ll give you the short version: I bleed purple and gold. And even so, even as rabid a fan as I am (I, the one in the family who wanted the big screen TV in time for football season), am here to tell you, LSU should have never won that game. We played horribly. We made so many mental errors, it was nearly textbook in how to shoot yourself in the foot. We actually lost the game at one point, when the final buzzer sounded, and it was one of the most embarrassing Keystone Cops endings I’ve ever seen: 32 seconds left on the clock, men on the field, calling a dumb play, then failing to cross the line by a foot… and without any more time outs and without a plan, a bunch of the team ran around like chickens with their heads cut off, the ball was snapped and the quarterback missed it. He missed it. It went bouncing down the field behind him as the clock ran out and Tennessee, who’d been the underdogs going into the game, won. They erupted with joy, ran out onto the field while the entire LSU stadium looked on in stunned grief. Not unexpected, seeing how badly we’d played the entire game, but still.

The only thing that made it palpable was that Tennessee had freaking played their hearts out. They excelled, several times. They deserved the win.

And then… the absolutely unbelievable happened. As everyone was on the field, and the coaches were already shaking hands, the ref got word from the booth that there was a mistake. The kind that happen only in the movies: there were too many defensive linemen on the field. Tennessee had put too many men out there, and because of that, they earned a penalty. And because of that penalty, LSU would have another shot at a final play.

They did. And they made a touchdown. And won the game.

I cannot tell you who was more shocked — the coaches, the players, or the audience.

Look, right now, there are a lot of people in this business feeling pretty beaten up. I know Tennessee had to have been pretty bitter about that loss when they went back into their locker room, but I will tell you one thing: they proved they had the heart and the talent to win. They had nothing to be ashamed of, and I’m not going to be surprised if they don’t use that close call to spur themselves on to do even better the next game and start handing other teams their asses. They may have lost one game, but they haven’t lost the season.

It’s the same in this business. Losses don’t define you. It’s what you do with them that defines you. Everyone needs to lose something, every now and then, because you learn, when you lose. You learn from your mistakes, you learn from the mistakes of others. One of the things you learn is that one loss does not a career define. Unless you let it. You pick yourself up, you keep moving on. You lose again? You pick yourself up again, you keep moving on. [The corollary is, if you’ve won everything you’ve aimed for, then you haven’t challenged yourself enough.]

My husband and I’ve been in the construction business for 28 years, and I’ve fought more battles than I care to remember. Sometimes, and there were many, when it looked like we were going to lose a battle, we’d get this image in our heads: 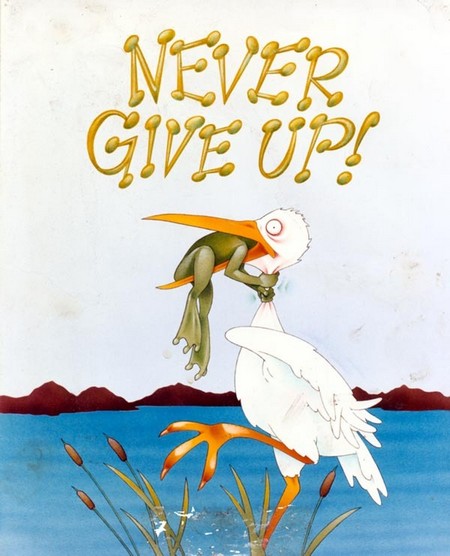 And we’d dig in and fight to survive another day. You can’t let the punches keep you on the ground, when you’re in business for yourself, and make no mistake about it, when you’re a writer, you’re in business for yourself. You have to have an almost impossible mix of ego (people want to read what I wrote) with humility (I have so much to learn, I’m never going to learn everything), but perhaps, most important, is tenacity: never give up, never surrender.

If you can quit? Then you’re in the wrong industry. If you’re not driven to keep going, driven to keep writing, driven to keep telling your stories, then there’s absolutely no shame in finding that thing that you are driven to do. Really, and truly, as honorable as I think it is to be the person who entertains others, I think it’s just as honorable to be a thousand other professions, because we all need each other. So if you can walk away, then run. Flee. Save yourself the grief.

Because there will be grief. There will be days when you do everything right, just about everything, and the other team wins the game because of one singular mistake. Or sometimes, you might finally be on the side where the dumb luck falls your direction. Tennessee did just about everything right and LSU didn’t, and still won on dumb luck. But there’s one truth about both of those teams: they’ve done their homework, they’ve practiced hard, over and over, even in the face of other defeats. They didn’t stop, either of them, and give up.

But they’ve both learned. It’ll be interesting to watch what happens next.

People will give you another chance, when you show them you’re tenacious enough to keep showing up for the game, that you’ve improved, that you’ve done the work, that you’ve learned from your losses.

I don’t know about you, but that’s all I need, is that shot. I’m not going to stop – trying, or learning — so no matter how luck falls with this try, or the next, or the next, I’ll be in it for the long haul.

So tell me, ‘Rati, who are some heroes in your life or in fiction that have exemplified the “never give up, never surrender” attitude that you admire?

28 thoughts on “Never give up, never surrender…”