I was sauntering (yes, I saunter) down Fifth Avenue one beautiful day this spring when I spotted Michael Weston walking with a friend. Weston’s name might not be familiar, but if you watch movies or TV, you’ll recognize him – he’s one of the finest character actors around. You might remember him as the young psychopath in Six Feet Under who carjacks David Fisher, dousing him with gasoline and torturing him brutally:

When I saw Weston on the street, I wanted to approach him and tell him I’d just seen one of his movies, and that I thought he was great in it. I decided not to interrupt his morning, and I’ve regretted it ever since. In Pathology, Weston plays a psychopathic junior pathologist who persuades other young residents to kill people and then challenge their colleagues  to figure out how they did it. It’s a typically arch slice of gonzo exploitation from the writer/director duo Neveldine & Taylor, whose films are so over-the-top that they make the bloodiest Tarantino flick look like a PBS documentary on the history of the finger sandwich at Wimbledon.

I wanted to tell Weston that I was a forensic pathologist, and that I’d just seen Pathology, and just how wrong everything about it was, and just how much I’d loved it.

Writers and lay people often ask me just how realistic shows like CSI are. I think that Mark Neveldine and Brian Taylor have the right attitude: who CARES? If the story really moves and the dialogue is strong, the only people who’re really going to sweat the forensic science will be the occasional entomologist, pissed off by the misrepresentation of scene interpretation by arthropod succession. It’s all make-believe – you just have to decide on what your own tolerance for the improbable or impossible is. And in Crank 2, even the characters are aware of the absurdity of their narrative, commenting frequently on its implausibility.

What I love about Neveldine & Taylor is their unapologetic embrace of excess – not just the extreme violence that is a hallmark of their work, but the excess sex, the excess swearing, the formal excess of their visuals and soundtrack. We all know what “good films” should be like – take the slate of any Best Motion Picture Oscar contenders and you’ll see nearly identikit films about decent heroes or heroines struggling nobly against overwhelming odds. And the closer the films come to the ideal of “goodness” – which is to say, the more they resemble a period Merchant and Ivory production, ideally plus Nazis, or a physical disability, or both – the more likely they are to win. The 2010 nominees were far more interesting than usual (in part because there were ten of them, which let weirdness seep in at the margins) but seriously: do you think any movie other than the anodyne The King’s Speech ever stood a chance?

It’s not that The King’s Speech was a bad film – on the contrary, it was very good. But sometimes, you just need someone to come along and gut the plump burgher of Good Taste.  We need someone to validate the flawed and the profane. Vulgarity and tastelessness provide an important balance for etiquette and decency, and they work best when delivered without apology. So we have South Park, one of the funniest, most incisive forms of social critique we’ve had in decades, half the dialogue bleeped for obscenity, rendered in primitive cut-out blobs.

Most of all, raw, deliberately graphic and extreme work that flies in the face of traditional notions of decency and “art” is exhilarating – it’s fun to see someone speak the Unspeakable. Even when it misfires horribly, as it usually does, I’m grateful when writers and directorss say Yes to risk. Case in point: in Crank 2, we are shown the genitals of a horse (erect!), a ferret and Jason Statham; it’s delightful.

Neveldine & Taylor have now finished five pictures: Crank, Pathology, Crank 2: High Voltage and Gamer. They also wrote the script for Jonah Hex; they were slated to direct, but walked away from the project over “creative differences”. Hex, a flaccid commercial failure, is interesting, since it shows how critical the team’s creative visual approach is to the written material. Pathology is satisfying, but I think much of the pleasure I took in it related to its scabrous trashing of my profession. Gamer, a sci-fi thriller set in a future where video gamers play first person shooters using living people as their combat arena avatars, had some good ideas, and looked great (a lot like the amazing Xbox video game Gears of War, actually), but ultimately failed to connect. The heavy material and the presence of “real” relationships (the major warrior and his wife and daughter) dragged the narrative down.

The masterpieces of the Neveldine & Taylor oeuvre are unquestionably Crank and Crank2: High Voltage. And I think they are legitimate masterpieces, particularly the sequel. The title is a polyvalent pun – “crank” can mean variously to move quickly, to intensify, an irritable eccentric, an aggressive rotational action, and methamphetamine, all of which apply to these movies.

This is high concept cinema at it’s finest. (I’ll now spoil a little here, although nothing you wouldn’t guess from the fact that there’s a sequel). In Crank, anti-hero Chev Chelios (a ridiculous name, and one of my all-time favourites) is a professional hit man who wakes up to discover that his enemies have poisoned him with a drug cocktail that’s shutting down his adrenaline system. Unless Chev Chelios manages to keep his heartbeat rocketing through constant stimulation (exposure to drugs, pain, danger and, of course, sex) his heart will stop. And there you have it: Speed in a thorax.

Chelios (Jason Statham) is a defiantly one-dimensional character. Told by his drug-abusing, defrocked physican/pimp friend Doc (Dwight Yoakham) that there’s no cure for the “Beijing cocktail”, Chelios chooses to spend his remaining time on the planet exacting revenge. What follows are 90 minutes of the most intense, obscene, violent action captured on film. (On video, actually – the films are shot in high-definition video, many by Neveldine himself on rollerblades with a hand-held consumer grade video camera, dragged behind a car unprotected at 50 mph.) 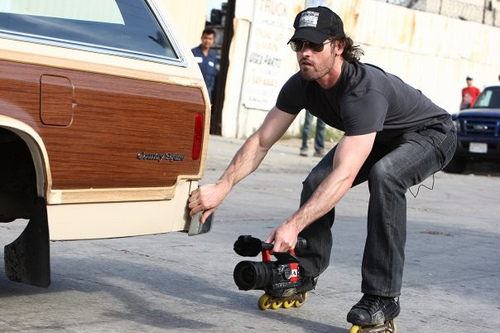 But if the first film was a complete rush, Crank 2 is a hurricane blast – faster, denser, harder, stronger. The yellow liquid is now shot into your veins by syringe, and the dominatrix has found a gun. At the end of Crank, Chev Chelios plummets 10,000 feet from a helicopter over L.A., managing during freefall to snap the neck of his worst enemy and to leave a farewell message on his girlfriend’s voicemail. He smashes into the roof of a car and ricochets off onto the street, facing a camera, inert; we hear his last two heart beats, see his pupils dilate, and then he’s dead.

Crank 2: High Voltage kicks off with a squad of triad goons scooping Chelios’s body off the street with a shovel, and rushing it off to a lab for resuscitation. Learning that the plan is to keep him in suspended animation, harvesting his impressive organs whenever a crime lord needs replacement tissue, Chev Chelios escapes. He discovers that he’s been fitted with an artificial heart; Doc informs him that to stay alive, he’ll have to recharge himself constantly with electricity. Chelios races off to recover his heart, along the way repeatedly zapping himself with any current he can get his hands on. Or his tongue. Or his nipples – you get the picture.

The other characters are as one-dimensional as Chev Chelios – effectively, this is cartoon violence, so it makes sense to have a cast of caricatures. The film is a delirious picaresque set in a Los Angeles populated exclusively by ne’erdowells and demimondaines – all the men are homicidal thugs, all the women are whores or strippers, even Chev Chelios’s girlfriend (Amy Smart). The language is graphically sexist, racist and homophobic, and yet the film revels in its population of misfits, rewarding the audience with a final climactic Battle of the Marginalized on Catalina in which an army of Latino gang-bangers confronts armies of gay, black leathermen in body harnesses and studs, and multiracial prostitutes in almost nothing.

Crank 2 is a completely postmodern film, the purest exercise imaginable in speed and surface, sound and fury signifying nothing but sound and fury. As a formal composition, it’s an astonishing achievement – it’s hardly surprising that the film was screened at the Whitney Museum of Art.

Now, I’m not suggesting that everyone will love these films as much as I do – I’m sure many will absolutely loathe them. But for me, these things are an astonishing blast of fresh air.

So, what about you? Do you ever find extreme things can be completely refreshing, or is that just me? Remember: there’s no such thing as a guilty pleasure.