I said that I’d do some prep here, but that’s not really feasible when I only blog twice a month (some of you have been prepping over at my blog, of course!). Still, I wanted to post SOMETHING useful for NaNo.

(If you have been living in a cave for the last ten years and have not heard of NaNo, you can read all about it here.)

I’m always encouraging you guys to read EVERYTHING you can about writing processes and structure, and I feel like this is a good time to nudge you all again to do a little reading about Joseph Campbell and the monomyth he details in his classic Hero With a Thousand Faces, and Christopher Vogler’s  Hollywood Cliffs’ Notes version of the same: The Writer’s Journey.

Wikipedia is a perfectly fine overview, and has all the info and links for you to explore further if you are so moved, and I hope you do.

It’s easy to get lost in Campbell (such a GOOD lost!) so Vogler’s is a more streamlined version, but as useful as it is, and it is – I think it falls short in one major way.

Here are the twelve steps of the journey that Vogler details:

Absolutely!  But let’s break that down into where those steps fall in the three-act structure:

Do you see the problem with this template?  All good for Acts I and III… but there are only two steps to guide you through that vast, interminable, suicide-inducing second act.  And the second act is a full HALF of the story.

That’s not a whole hell of a lot of help when you’re in the middle of the damn thing.

I have another problem with Vogler, in that THE ROAD BACK step.  I have far too often seen fairly new writers struggling with that concept, when the fact is that not all stories even have this step. It’s a great element for a pure Mythic Journey story, like Lord of the Rings (the first), Star Wars, and The Wizard of Oz. But NOT ALL STORIES FALL INTO THIS PATTERN.

So I’ve composed an alternate version of this journey that gives a little more detail to help you through that treacherous middle.

We meet the Hero/ine in the Ordinary World.

— a Ghost or Wound

And an Opponent, or several, which is standing in the way of her getting what s/he wants, and possibly wants exactly the same thing that s/he wants.

She gets a Call to Adventure: a phone call, an invitation, a look from a stranger, that invites her to change her life and crystallizes her desire.

That impulse may be blocked by a

— And/or she is herself reluctant to take the journey.

But she overcomes whatever opposition,

— Gathers Allies and the advice of a Mentor

— Formulates a specific PLAN to get what s/he wants

And Crosses the Threshold Into the Special World.

The hero/ine goes after what s/he wants, following the PLAN

The opponent blocks and attacks, following his or her own PLAN to get what s/he wants

The hero/ine may now:

All following the Plan, to achieve the Desire.

No matter what genre, we experience scenes that deliver on the Promise of the Premise – magic, flying, sex, mystery, horror, thrills, action.

And usually in this Act the hero/ine is Winning.

Then at the Midpoint, there is a big Reversal, Revelation, Loss or Win that is a Game-Changer.

The hero/ine must Recover and Recalibrate from the game-changer of the Midpoint.

And formulate a New Plan

Neither the Hero/ine nor the Antagonist has gotten what they want, and everyone is tired and pissed.

And often Cross a Moral Line

And the hero/ine, or if not the hero/ine, at least we, are getting the idea (if we didn’t have it before) that s/he might be WRONG about what s/he wants.

Things begin to Spiral Out of Control

And get Darker and Darker (even if it’s funny)

Until everything crashes in a Black Moment, or All is Lost Moment, or Visit to Death.

And then, out of that compete despair comes a New Revelation for the hero/ine, including understanding what s/he has been wrong about from the beginning

That leads to a New Plan for the Final Battle.

Then Storms the Opponent’s Castle (or basement)

The Team (if there is one) Attacks the Opponent on his or her own turf, and all their

— and secondary Opponents are defeated in a satisfying way.

Then the Hero/ine goes in alone for the final battle with the Antagonist. Her Character Arc, everything s/he’s learned in the story, helps her win it.

The Hero/ine has come Full Circle

And we see the New Way of Life that s/he will live.

If this works to make the process a little easier for you, great! It may be more useful to look at it later, during your rewrites.

And if not, no problem – forget it! I’m just always looking to try to explain things in different ways, because I know for myself, sometimes it just doesn’t sink in until I hear it for the tenth or ten thousandth time.

So are you doing Nano? Do you use Campbell and/or Vogler in plotting or revising your stories? Tell us about it!

It’s October, my favorite month, and you-know-what is coming, so I’m giving away 31 signed hardcover copies of my spooky thrillers Book of Shadows. and The Unseen.

An ambitious Boston homicide detective must join forces with a beautiful, mysterious witch from Salem in a race to solve a series of satanic killings.

A team of research psychologists and two psychically gifted students move into an abandoned Southern mansion to duplicate a controversial poltergeist experiment, unaware that the entire original research team ended up insane… or dead.

Inspired by the real-life paranormal studies conducted by the world-famous Rhine parapsychology lab at Duke University.

@SirBenfro @ChuckWendig This is the way.

@robwhart @RachelHowzell It is SO good! Been reading with a smile on my face.

10 Fascinating Facts About the Thesaurus for National Thesaurus Day https://t.co/k40kLWmssI 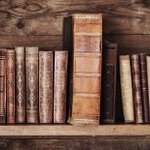