That woke everyone up this morning, didn’t it?

I’m at Bouchercon, the World Mystery Convention, paneling, signing, doing interviews and of course, catching up with friends in the bar. This morning I moderated a panel called “Keep it Moving: Pace in Mysteries and Thrillers.” We were discussing tricks of pacing and suspense, and I think I’ll just continue that discussion here, with one of THE most important techniques of pacing I know.

Need more details? Go to @thrillerwriters and find out how to sign up. @alexdemille and I had a great time talking about dialogue, something I've never given a workshop on before but am rethinking that in the future because I surprisingly had a lot to say! #amwriting #thrillers 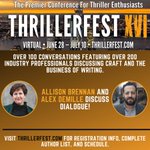 @Wren_cloud @ThatEricAlper Ever seen it live?

My kids school requires seniors to take a semester of Economics, helps prepare them for real-world issues (credit, debt, school loans, banking, basic micro/macro economics.) Great class. We can have that PLUS four years of Eng/Lit and history in high school. ALL important.

"We need to be teaching students how to do taxes and financial literacy!"

Yes... Ok... that's like maybe a unit and relies on knowledge of math and economics. Also, how to spend money is an ethical decision that would benefit from the wisdom of lit and history.

Every Picture Tells a Story No. 3581: #photography #photos #inspiration

@missjustinebaby @whoisben @unscriptedmike I guess 'comply with police commands unless you want to get shot" only counts for black people.

Reply on TwitterRetweet on TwitterLike on Twitter14Twitter
Load More...