Love at first sight is always followed by a period of recognition of initially unnoticed flaws, with subsequent acceptance or rejection of the hastily beloved. I fell wildly in love with New York City when I was a young child; decades later, I still feel like kissing the sidewalk of this sainted isle whenever I launch myself from my doorstep into the world. I’m well aware of the city’s complexities – sometimes brutally aware, given my work as a medical examiner here – but I embrace it in all its beautiful, thorny glory.

One way of managing things with dark and light sides is to mythologize the dark; it’s a way of controlling it, making it attractive. New Yorkers still take huge pleasure in the image of this town as a violent, crime-riddled hellhole where only the tough survive, despite the fact that this is one of the safest large cities in the world. Perhaps my favourite of the city’s great propagandists was Damon Runyon, whose stories about the antics of charming petty criminals and hoodlums delighted me as a boy. Weegee, a darker contributor to the lore of Gotham, delighted me as an adult.

Usher Fellig – dubbed Weegee because of the Ouija board-like prescience that had him showing up at murder scenes often before the police – was a crime beat photojournalist who became world-famous during the 30’s and 40’s. His was the unflinching eye that splashed Skid Row murders and high society drunks in paddy wagons over the front pages of the morning paper. His photographs have a stark urgency that underscores one of the things that New Yorkers love most about their city: it’s realness. In this town, we abhor the inauthentic. For example, most of us despise the changes that have taken place in the Times Square and 42nd Street areas – it has been transformed from the gritty neighbourhood of the 70’s into our own little pocket of fake. We accept it because we understand that it wasn’t put here for us: it was put here for the tourists.

Weegee’s photographs – the line-ups of arrested transvestites, the children sweltering on a fire escape late on a roasting summer night, the bodies of the dead sprawled in doorways, on sidewalks on saloon floors – show the harsh conditions of real life in the real city. But they also bring to their subject the gloss of myth, the blessing of everlasting life, the confirmation of a moment as legend. Some of this is the gloss of time, certainly, amplified by the fact that his images were a visual touchstone for the brooding noir films that spread like black mold over the post-WWII American consciousness – it was, in fact, Weegee who coined the term “the Naked City”. 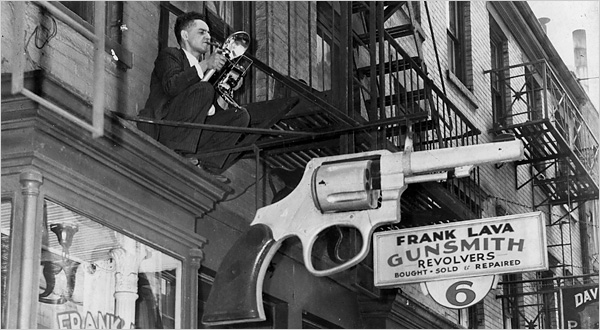 “I would drop into Police Headquarters at around 7:00 p.m. If nothing’s stirring and my elbow don’t itch – and that’s not a gag, it really does itch when something is going to happen – I go on back to my room across from Police Headquarters and go to sleep. At the head of my bed I have a hook-in with the police alarms and fire gongs so that if anything happens while I’m asleep, I’m notified…When I get my pictures I hurry back to Headquarters. There is always a follow-up slip on an accident (or crime) with all the names and details coming in over the teletype. I found out who were injured, where they lived, and on what charges they have been arrested, so that I can caption my pictures correctly. Next I go back to my darkroom and develop my prints. By this time it is around six in the morning and I start out to sell my prints.” 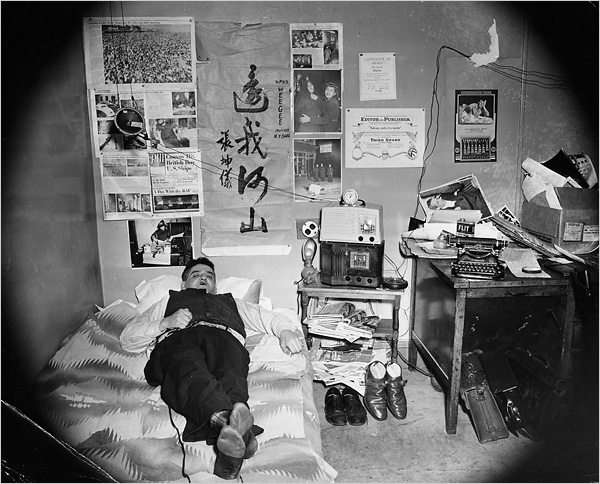 Weegee’s apartment, police radio by his bedside
Here are a few of his iconic images:

“Balcony Seats at a Murder, 10 Prince St” Weegee was more interested in the onlookers from the windows than the corpse in the doorwell 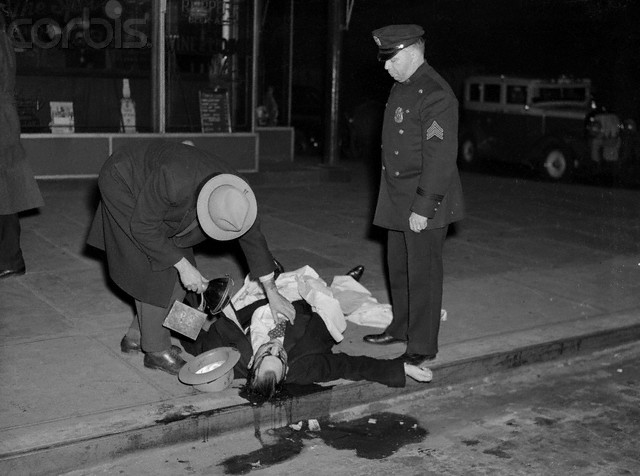 Weegee, a tireless self-publicist, wasn’t above adjusting the scene for a better photo 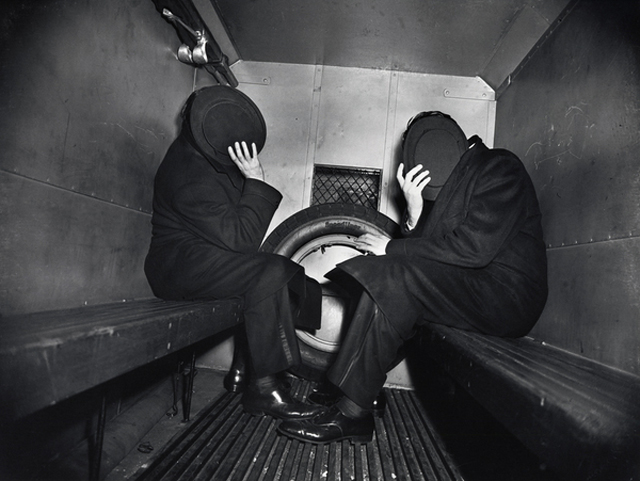 Charles Sodokoff and Arthur Webber Use Their Top Hats to Hide Their Faces, January 27, 1942. The caption from the New York Daily News read: “In Top Hats – In Trouble, Charles Sodokoff, 28, and Arthur Webber, 32, both Broklynites, use their toppled toppers to hide faces as they take free ride to Felony Court. Boys were tippling at Astor Bar Saturday night when they decided to slide down banisters for fun (???). Cop was called and they assaulted him. Funsters then went from mahogany bar to iron type.” 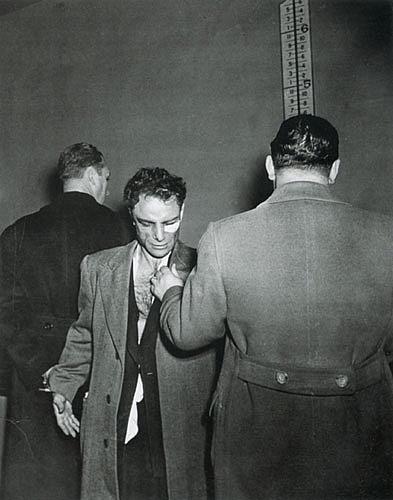 “Cop Killer”, 1941“Heat Spell”, 1941. Newspaper caption: “The hot weather last night took Weegee, the photographer, to the Lower East Side, where he found these children sleeping on a tenement fire escape at Irving and Rivington Streets. Weegee says he gave the kids $2 for ice cream. But their father took charge of the dough.”

Weegee actually played an important role in my life in New York City. When I first moved here in 1990, I knew no one. A couple weeks after my arrival, I saw an ad for an unusual item: someone was selling a Weegee portrait of the notorious pin-up model Betty Page. It turned out that the seller lived two blocks from my apartment; it also turned out that the photographer was the notorious glamour and fetish photographer Eric Kroll. When I arrived at his studio to see the print, I was met at the door by a corseted dominatrix; they were in the middle of a shoot. I watched until they finished, then the three of us pored over some of the domme’s clothing designs. And then we looked at the Weegee photo. 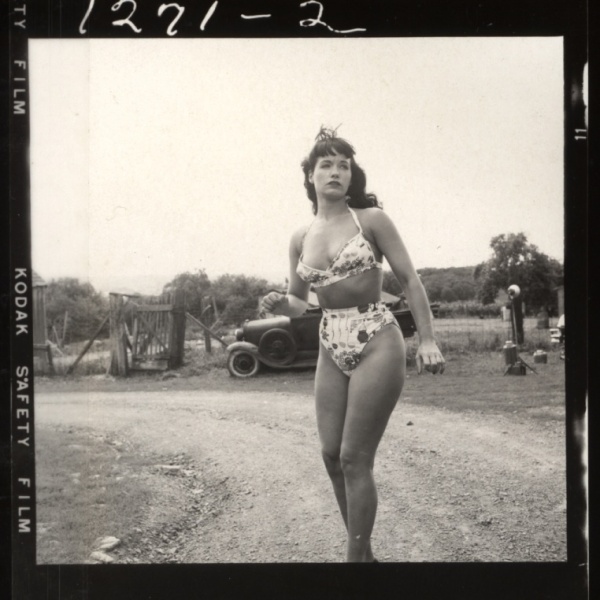 I wasn’t sure I could afford the print; I said I’d think about it. A few days later, I called back and asked if I could have another look at the photograph. Eric invited me to his studio; this time, the door was opened by a woman naked except for a narrow leather belt and fetishy black leather pointe shoes with 7” tall heels. It was the sort of coup de théatre that I came to expect from Eric, a deliberate attempt at manipulation of one friend using a model or another friend. I’m a physician, and am completely used to naked bodies –  Eric was expecting me to be flustered, or embarrassed or excited, but instead I found it amusing, and sweetly flattering.

So we became friends. For the next ten or so years, until Eric moved to the West Coast, I occasionally helped him with his shoots, helping move the lighting in his studio, schlepping equipment to professional dungeons and burlesque clubs around town. It was an interesting education, and had a huge and unexpected benefit: my first circle of NYC friends came from the city’s odd sexual demimonde – strippers, dominatrixes, pornographers – some of whom are still my closest friends today.