Last Thursday, Phillipa released the results of her poll on preferences for male and female authors and protagonists. In my comment, I sheepishly admitted that I’d not really recognized my favoritism toward male authors until obliged to fess up.

And yet I knew there were women writers I not only enjoyed but admired and read greedily. So in a fit of atonement (I’m so Catholic), I felt obliged to discuss one of them here. A woman who has me awestruck, frankly: Martha Gellhorn. 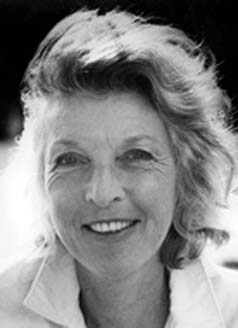 I came upon her by accident—that is, while doing research.

John Updike once remarked that he realized early in his career that he could either be a reader or a writer but not both. Hearing that, I felt welcomed, as it were, to one of the severest regrets of many a professional writer—the lack of time one has to pursue reading for pleasure. Deadlines, the demands of research—not to mention the fear of a sort of stylistic or tonal contamination many novelists experience when they read fiction while at work on a manuscript—bars many of us from reading as widely as we would like.

And so much research requires plodding through impenetrable tracts of dense lifeless data, culling for that one crackling detail that might bring a passage to life. The joy is compound, then, when a source not only provides the information sought, but does so with a fresh, commanding style.

That’s how it was when I encountered the work of Martha Gellhorn, war correspondent for nearly fifty years (as well as a novelist and short story writer), too often known merely for her brief marriage to Ernest Hemingway.

Her collection, The Face of War, drawn from her work covering combat zones from the Spanish Civil War in the 1930s to Central America in the 1980s, provided one of those rare frissons every reader craves—the discovery of a fresh voice that is so unique, so penetrating, so sure-handed and clear, that every page seems to shimmer or haunt. 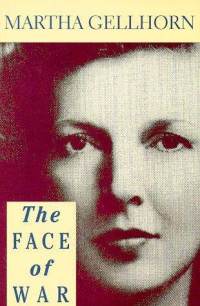 Opening the book at random, I came across her descriptions of the Nuremburg defendants, and was spellbound:

Goering’s “terrible mouth . . . a smile that was not a smile, but only a habit his lips had taken.”

Hess, with “dark dents for eyes,” who “jerked his foreshortened head on his long neck, weird, inquisitive and birdlike.”

Frank with his “small cheap face, pink-cheeked, with a little sharp nose and black sleek hair. He looked patient and composed, like a waiter when the restaurant is not busy.”

Streicher compulsively chewing gum, his face blank: “the face of an idiot, this one.”

The “dreadful, weak” face of Schirach, who from the side sometimes resembled a hypochondriacal woman, who all her life “blackened her family’s existence with complaints.”

But the principal reason I was drawn to her was because, late in her professional life, she ventured to El Salvador, where much of my most recent two novels, Blood of Paradise and Do They Know I’m Running?, take place. She notes that she went there “in stupefying ignorance,” but it was her motive for going that I found inspiring:

As citizens, I think we all have an exhaustive duty to know what our governments are up to, and it is cowardice or laziness to ask: what can I do about it anyway? Every squeak counts, if only in self-respect. Gloomily, because otherwise I would be ashamed of myself, I made the small effort of a detour to El Salvador.

Gellhorn helped me with my own ignorance, just as she corrected her own. She spoke of a young American journalist who checked into the San Salvador Sheraton, left the hotel and then was never seen again until his body was returned to his family a year and a half later. The reason for his murder? No one could tell. Suggesting it might have been a case of mistaken identity, Gellhorn reflects acidly, “When killing is so easy, general and never punished, there must often be casual errors.”

Despite having been in war-ravaged cities such as Madrid, London, Helsinki and Saigon, she found San Salvador to be the most frightening of all. The violence didn’t come loudly from outside, but stealthily from within. The police hunted day and night, and she feared for the people who spoke to her. “Those who should have hated me as an American were friendly and trusting. But I knew what they risked and was awed by their courage.”

She came to admire the country’s poor: “Learning to read is the peasants’ rebellion. Their primer is the Bible. They were called the People of the Word, and that made them subversives. Subversives are prey.”

She was also outraged by the state of the refugee camps, the worst she’d seen since Vietnam. “Without the Church, courageous in El Salvador, the refugees would starve.” And her conversations with the wealthy women of the capital revealed a mind-numbing oblivion to the true state of affairs in their country: Only a few agitators were causing the trouble; talk of murdered civilians was propaganda; if there were any refugees, they were fleeing the Communists.

Such bromides were echoed by President Reagan, for whom Gellhorn harbored a particularly fierce revulsion, describing him as “boyish,” with an “ultra sincere chocolate voice.” When he equated the Nicaraguan Contras with the Founding Fathers, she could barely contain her rage: “This is truly astonishing, since the Founding Fathers were not known to gouge out the eyes and mutilate the bodies of their enemies, or to commit other such unseemly acts.”

Gellhorn found many parallels between El Salvador and Vietnam, which she also covered as a journalist, and she remarked that it was not easy being a citizen of a superpower, nor was it getting easier. She would feel isolated in her shame, she said, if she didn’t belong to a perennial minority of Americans, the “obstinate bleeding hearts who will never agree that might makes right, and know that if the end justifies the means, the end is worthless.” She recalls with both fury and shame how Johnson and Nixon lied about their plans to escalate the conflict in Southeast Asia, cheating America of the leaders its citizens thought they had elected, only to blunder into atrocity:

Power corrupts, an old truism, but why does it also make the powerful so stupid? Their power schemes become unstuck in time, at cruel cost to others; then the powerful put their stupid important heads together and invent the next similar schemes.

Like I said, sometimes research isn’t a chore, it’s a joy, an inspiration. A call to arms. Reading Gellhorn reminded me that the battle against naked power never ends, and life is a daily choosing of sides—if only for self-respect.

Murderateros—who sits on the throne in your temple of revered writers, male or female?

Do you have a favorite war correspondent, or journalist, whose work anchors you once again in the world and reminds you of the stakes of being human, of being alive together at this time, in this place, on this planet?

What inspirational nudge, insight, or life lesson has your favorite writer bestowed?

Jukebox Hero of the Week: Boy, this one’s hard, because the post is so damn serious. But I’m going with Arlene Auger, one of my favorite sopranos, who died far too young (age 53) of a brain tumor in 1993. She was a late bloomer, so her career was sadly far too short, but her voice was the essence of simplicity and clarity.

This clip shows her singing “Morgen” (Morning) by Richard Strauss. I chose this piece because Strauss, though exonerated of being a Nazi sympathizer, was nonetheless one of the composers sanctioned by Hitler as fitting for the Third Reich, and Thomas Mann condemned him after the war for being “a Nazi composer.” Despite the messy background, the song is stunning, and reminds me that man is complicated, stitched together from light and dark, and even the wise and gifted routinely fall far short of their ideals (ask Joe Paterno):