I had a chance to visit my husband’s family on a recent trip to Seattle. Always a dicey proposition. “Psst,” someone hissed as I passed the front bedroom. A hand snaked out the scant two inches of open doorway. “I thought you’d get a kick out of this.”

I took the offering with a thumb and forefinger. Bruce’s brother does all his shopping at flea markets and garage sales, and you never know what he’ll come home with. This time it was a gem.

A CD called Miss Calypso, performed by a woman I knew for other talents: Maya Angelou.

Who  knew? It started me thinking about other writers – both mystery and general fiction — who started off in life as musicians. First came the tune. Later they added words.

It seems natural that songwriters would later turn to novels.

Leonard Cohen. Jimmy Buffett. Kinky Friedman. I guess three verses and a chorus were no longer enough for them.

But there were lots of other musicians as well. Ralph Ellison (Invisible Man) was a trumpet player and pianist, with a love of jazz.

Mystery writer and presidential daughter Margaret Truman had a singing career before a writing one. The critics were kinder to her books than they were to her vocal talent.

Ed McBain was a pianist, too, but I’m sure glad he later turned his attention to fiction. The world would not have been as fine without his 87th precinct stories.

How about thriller writer Greg Iles? Guitarist, vocalist and founder of the band Frankly Scarlet, Greg only turned to writing when he  realized that the life of a traveling musician wasn’t right for a family man.

James McBride (The Color of Water)
is musical theater composer, songwriter and sax player. He’s still making music today, although I’m delighted to see that he describes himself first as an author and second as a musician in his publicity material.

Ridley Pearson is an orchestral composer and folk song writer.

Hal Glatzer uses his vocal and guitar skills on the page as well as out loud.

John Lescroart  has got a new CD out (Whiskey and Roses) as well as a new book (Betrayal).

It’s an international phenomenon, too. The 2006 Australian Idol winner, Damien Leith published his first novel, One More Time, last October. And Norwegian writer, Jo Nesbo, who created a detective with the unfortunate name of Harry Hole, is both an economist and a musician.

Best-selling Japanese author, Haruki Murakami (After Dark) owned  jazz clubs in Tokyo and performed for years.
A recent New York Times interview with him provides perhaps the best reason there’s such a dramatic link between musicians and writers.

“Practically everything I know about writing … I learned from music. It may sound paradoxical to say so, but if I had not been so obsessed with music, I might not have become a novelist. Even now, almost 30 years later, I continue to learn a great deal about writing from good music. My style is as deeply influenced by Charlie Parker’s repeated freewheeling riffs, say, as by F. Scott Fitzgerald’s elegantly flowing prose.

Once, when someone asked Thelonious Monk how he managed to get a certain special sound out of the piano, Monk pointed to the keyboard and said: ‘It can’t be any new note. When you look at the keyboard, all the notes are there already. But if you mean a note enough, it will sound different. You got to pick the notes you really mean.’

I often recall these words when I am writing, and I think to myself, ‘It’s true. There aren’t any new words. Our job is to give new meanings and special overtones to absolutely ordinary words.’”

In a recent blog post over at Hey, There’s a Dead Guy in the Living Room , Sharon Wheeler talked about hearing a soundtrack for books she reads. So that’s my musical question for you today: Do you hear a song or a singer when you read certain works? Is there such a thing as a soundtrack to a book?

And is there any logical link between musicianship and writing?

@LauraMLippman Super cute. And you match the comforter!

@faustfatale Not long at all.

Thanks, @SarahEGlenn ! And happy Friday!

Any day is at least a little bit better if it begins with petting a dog.

I've been a big fan of @marykubica for ages, and I feel like The Other Mrs. is a leap forward for her, both in style and structure. This is a remarkable book, insidious and dark and elegantly plotted, with a wonderful ending that I just didn't see coming… https://t.co/xxKocagtPJ 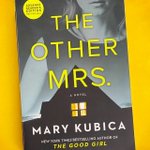