Great news for Murderati fans. We’re back! The fabulous J.T. Ellison and web designer extraordinaire Cissy Hartley figured out a format for us to continue blogging but without the rigid schedule, so that we’re able to post on our own blogs and have them also show up on the Murderati blog. It solves the problem that ultimately shut Murderati down last year: it was taking too much time away from our writing to adhere to a regular schedule.
And I thought for my return post, I’d finally come clean about my last year (both here and on the new Murderati blog.
It’s been a little over a year since my last post on Murderati. So what have I been doing on that Murderati vacation?
Well, of course, yes, I wrote another book. Two books.

Blood Moon, the second in my Thriller Award-nominated Huntress Moon series, is available now. I’m very excited to announce that Thomas & Mercer has picked up the series and will be re-releasing Huntress Moon and Blood Moonin the fall, along with Book Three, Cold Moon, in print, eBook and audio. There’s a brand new audiobook of Huntress right now, which I put out myself, with the fantastically talented, multiple Audie nominee R.C. Bray narrating. And I’m working on Book 4 right now, along with another series. More about all that to come.

But there are other things to catch up on first.


Because it was also almost exactly a year ago that I went to Left Coast Crime in Colorado Springs, and ended up, um, moving to Scotland.

I blogged about that Left Coast Crime trip here, but I didn’t exactly tell the whole story.
You all know that at a conference, you can find the writers at the bar. You may not be as aware that the longer you stay in the conference bar, the more likely it is to turn into a hotbed of illicit activity. (Okay, I guess that’s true of any bar…)
So last year at Left Coast Crime I was at the bar talking to Scottish crime writer Craig Robertson… and basically we never stopped. I visited him in Scotland, he visited me in California… and suddenly we were redecorating an office together. (No, we don’t write in it at the same time. He often doesn’t wake up until I’ve finished my entire writing day. Which is useful for productivity…).
I always said if I ever did the love thing again, it would have to be with another writer. It’s just too hard when the person you’re sharing your life with has no idea what is going on in your head. With another crime writer, you know exactly what’s going on in your partner’s head. And it’s seldom pretty. And that’s okay. Because let’s face it, what’s in your own head isn’t very pretty, either. And you can do things like wake the other person up in the middle of the night to ask critical life questions like “What’s the absolute minimum time you can get DNA results back?” and they will not only have the answer but not mind you asking (much). That’s pretty golden.
So we’ve been living together a year now, which is pretty good considering that I moved in with him before we had a first date. And it will make for some interesting new blog material, because I have three new perspectives to write about: living with another thriller writer, and living in another country, and the UK book business.
I’ll start today with the question everyone always asks me:
What’s it like living in Scotland?
And you know how I love my lists, so here’s a short list of answers.
– It’s more like Trainspotting than Brigadoon 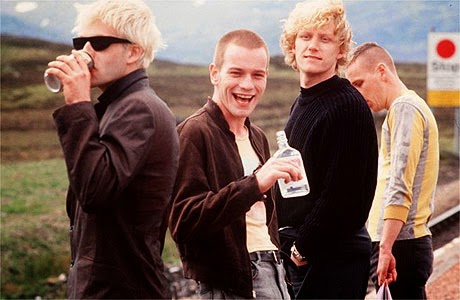 Actually, Glasgow is more like Trainspotting, Edinburgh is a bit like Brigadoon. Especially up around the tourist traps near the castle. We live between the two cities, so I get to spend a lot of time in both of them, and it seems to me that Glasgow and Edinburgh have a combative relationship somewhat like the one between L.A. and San Francisco (except that L.A. doesn’t really look outside itself enough to realize that San Francisco has a combative relationship with it…). Glasgow is the mean streets, very masculine, outgoing, aggressive, and apparently crime-riddled. 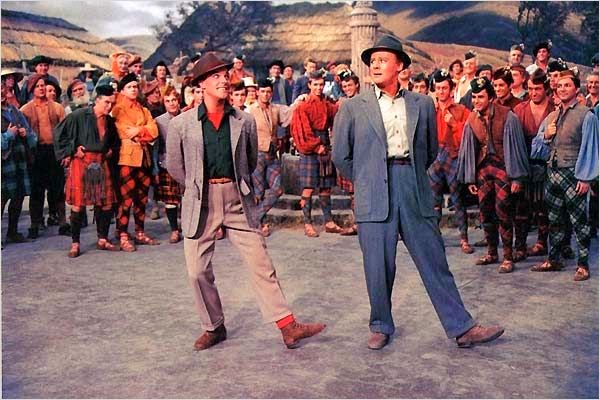 Edinburgh is dreamy and arty and feminine (really one of the more gorgeous cities I’ve ever seen). As a part of the crime writing scene I spend more time in Glasgow, but I like both cities and find the contrasts fascinating. Yes, I’m taking notes…
Speaking of Trainspotting…
– Subtitles would be good
Okay, I know that in my list to the Universe of what I wanted in a partner I suggested that an accent would be nice. English, Irish, Scottish, they’ve all always worked for me. Plus the humor. What I didn’t know was how bloody hard it is to understand a whole country full of them.
Craig is pretty comprehensible when we’re alone. He was a journalist for twenty years and has interviewed people from all kinds of countries, so he’s used to adjusting his accent to whomever he’s speaking with. But get him in a taxi, and he starts talking with the driver… they might as well be speaking Swahili.
– Separated by a common language
It’s not just the accent. Even when I do manage to decipher that, I am constantly running into words and usage that I’ve never heard of. Everything that we pluralize in the US, the UK singularizes, and vice-versa. It’s the linguistic version of driving on the wrong side of the road, which they also do here. Lots of words get shortened (leccy, brekky, footie) and everything shortened has a “y” or “ie” added. If that all wasn’t short enough, they are constantly dropping “to be” in sentence construction (you hear “needs ironed” or “needs replaced” instead of “needs to be ironed” or “needs to be replaced”). And of course, everything is “wee.” It’s not “a walk” or “the shop” or “a text.” It’s “a wee walk” and “a wee shop” and “a wee text.” (If you ever hear me saying a “wee” anything, you’ll know I’ve crossed some internal line and there’s no going back.)
Apparently the Scottish people invented the English language. Apparently they invented a whole lot of other things that the English stole. So I have no grounds for any linguistic argument. Plus you really don’t want to get in an argument with anyone Scottish – they seem to have invented that art, too. So I don’t argue. I just casually mutilate the language with my Californiaisms. Probably I’m not the only one who needs subtitles.
– There are castles
Like this one, which we can see from our street: 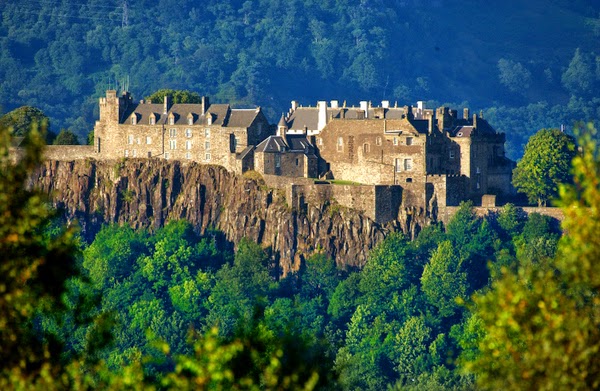 In fact, there is history everywhere, and really, really old history. Sights like the above are so common here I often feel as if I’m living on a movie set. My dreams are pretty surreal, too.

– The weather isn’t as crap as they keep saying it is
Scots like to complain. They especially like to complain about the weather. Maybe I got such a hard sell on how crap the weather was that it seems sunny by comparison (I’m a native Californian – people were betting against me surviving my first winter) or maybe I spend so much of my day inside my own head that I don’t notice the weather, or maybe rain is just good for the kind of writing I do, or maybe Scotland is finally getting the global warming it’s been dreaming of… but I don’t mind the weather at all. It rains a lot, but there’s also a lot of sun. It’s also clear air all the time, which is wonderful. SMOG is bad. Snow is a major pain and could kill you. Rain is just weather.
– There’s this thing called a pub quiz
Pub quiz is both hilarious and nerve-wracking. Luckily they take place in a pub, so all that Guinness takes the edge right off.
Look, we all know Americans are notoriously, spectacularly bad at geography. And there’s nothing like a pub quiz to make you understand how little you know about the composition of the world. I’m even worse than normal because when I was in primary school, the gifted and talented classes were held during geography hour, so I got lots of art and square dancing, which are pretty useless in the geography portion of a pub quiz. While I occasionally get random American trivia right, I try not to get involved in the tie-breaker final answer kind of thing. But it is hilariously good fun, much more engaging than a night in watching television.
– Don’t even think about mentioning Braveheart
Not being a fan of Mel Gibson’s torture porn, I never saw the movie myself, but apparently it’s about as accurate to Scottish history asApocalypto is to Mayan history. 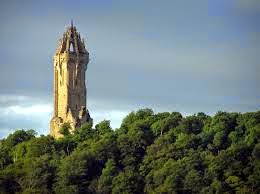 The actual story of William Wallace is fascinating and explains a lot about the Scottish character. He was a Scottish landowner who rebelled against incredible persecution under the English and became one of the main leaders in the Wars of Scottish Independence in the late 1200’s- early 1300’s. (And yes, it all still feels that old over here.)
Here’s the Wallace Monument, which I can see from the bedroom window (Do we think men had anything to do with this design? I wonder…)
– Yes, there are kilts

And I’m in favor of them. 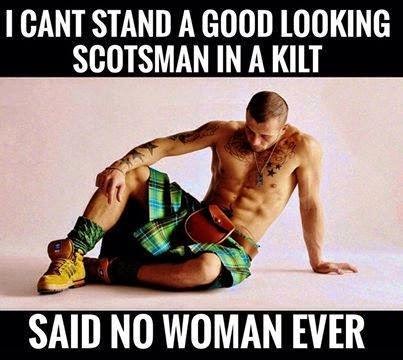 So, I’ve come clean. What have you all been up to this year?
– Alex
As a welcome back to Murderati, I’m giving away a new audiobook of Huntress Moon. Just comment to be eligible! 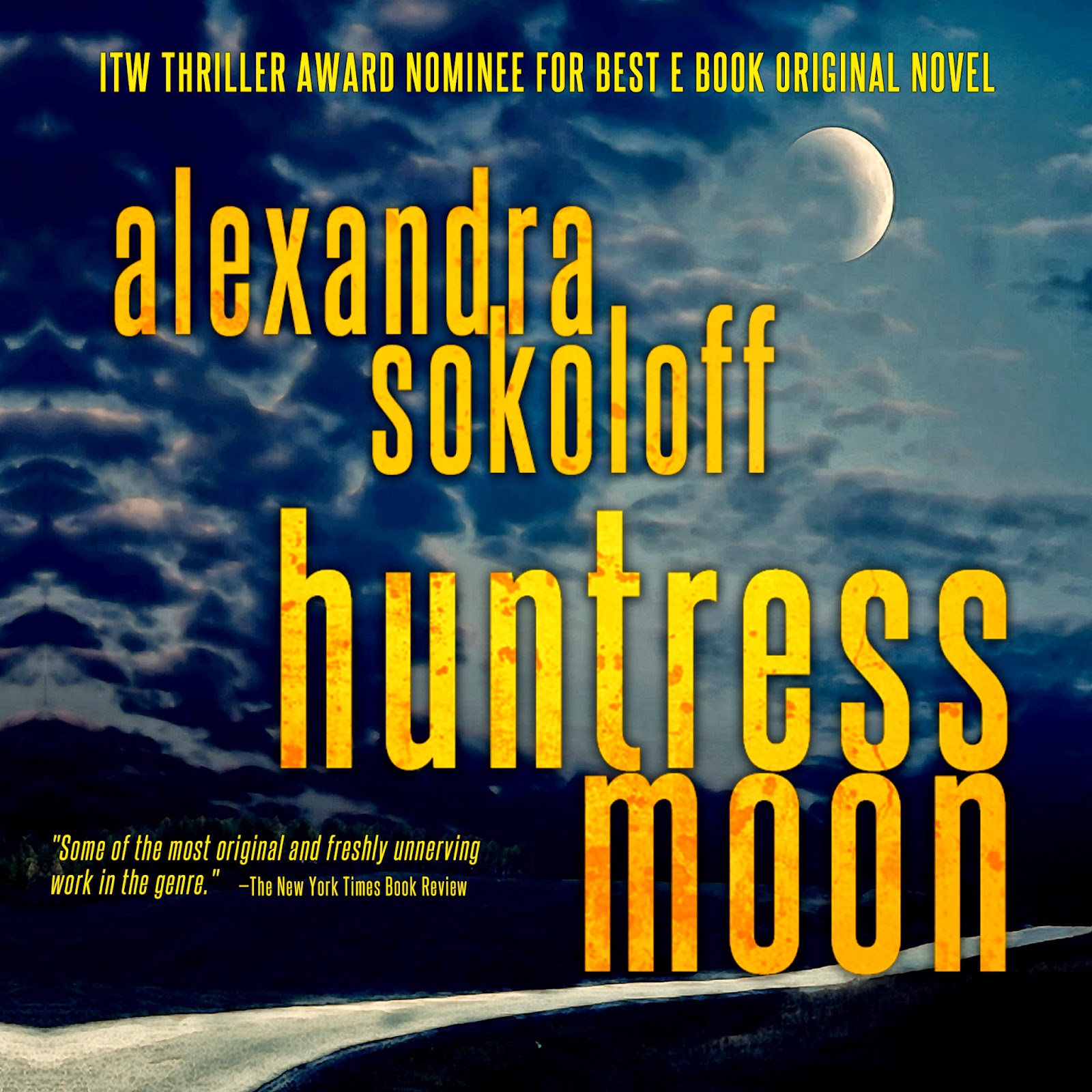