Alexandra and Allison this past week blogged about heroes, and I mentioned in a comment that my favorite heroes are seldom the kind so many others seem to find so compelling. I realize this may seem like apostasy, but as much as I enjoyed Reacher and Harry Bosch and Dave Robicheaux (my favorite series hero), I felt no great need to revisit them. One bite of the apple and I was pretty much sated.

I know. Shoot me.

What can I say—I prefer the muckabout or lost soul, the guy down on his luck and wildly imperfect but not contemptible or contemptuous, the despised or disregarded outcast who comes through in a selfless act of courage.

Not only does this sort of hero feel more real and thus convincing to me, his arc is more gratifying because it travels a more difficult and unlikely trajectory. I can’t buy in to a final victory if it’s foretold all along by the hero’s too-conspicuous strengths and virtues.

And the hero I’m talking about can’t just possess a flaw, or a haunted past, or a lack of foresight. The flaw has to undermine his abilities or his will in such a way the climactic confrontation is realistically in doubt until the very end. That’s what creates suspense for me—not plot twists or overwhelming odds. The sheer complicated noble blind perversity of the human heart.

This type of hero appears in more permutations that one might think at first blush—everyone from Gal Dove in Sexy Beast:

To Kid Collins in After Dark, My Sweet:

To Freddy Heflin in Copland:

To Mickey Ward in The Fighter:

To, yes, Seabiscuit (the horse everyone gave up on):

I think heroes reflect a kind of love affair. We don’t choose who we’re attracted to, who we fall in love with. That’s done for us by forces in our hearts and minds—and bodies—far beyond the radar’s sweep. And what can I say, the heroes so many others love often leave me cold. They remind me too much of the star quarterback, whereas I’ve always admired the guys in the trenches, the big uglies with muck and blood on their faces and hands, who fight and claw with little recognition, out of honor or pride or just cussed meanness. The Grunt, not the Officer & Gentleman. Sergeant Rock, not Captain America.

Now, it may well be that this love affair I’m describing is self-love. The kinds of heroes I like best are an almost embarrassingly obvious reflection of myself. They strike a chord because I see You Know Who in them.

But they also remind me of my father, whom I loved deeply and admired, whom I watched every morning dress for work like a warrior putting on his armor—this man my mother savaged with ridicule throughout their marriage, and left to die alone in a nursing home thousands of miles away. I wanted to rescue this proud man from his lovelessness, to redeem both him and me.

But I’m not sure pursuing this from an overly personal perspective gets us anywhere, so I’d like to discuss it in terms of one particular book and film, a relatively little known crime story from George Harrison’s HandMade Films titled Bellman & True (1987), and the novel by Desmond Lowden on which it’s based.

Here’s a trailer for the film, and the similarity to Sexy Beast should be obvious.

They’re both British crime capers with a bank heist at their cores, with similar themes of the hero being drawn in against his will. But Bellman & True‘s Hiller lacks Gal Dove’s fallen-angel sex appeal — something that, in the end, strangely works to Hiller’s advantage.

Yes, I ken John Peel and Ruby too.

Ranter and Ringwood, Bellman and True.

From a find to a check, from a check to a view,

From a view to a death in the morning.

But there’s a pun in the term “bellman.” It also refers to a criminal who specializes in getting past bank alarms.

As good as the movie is—and it’s not just one of my favorite crime films, but one of my favorite films, period—I recently spent a sunny Sunday reading the book on which it’s based. I’ve now ordered everything else I can find that Desmond Lowden’s written—most of which, sadly, is long out of print and can be had for a song.

Don’t confuse obscurity with lack of talent—in writers or heroes.

This book provided me with one of the most gratifying reading experiences I’ve had lately. As I said, I read it in a day—it’s a mere 183 pages—almost in one sitting. (I’ve only done that with two other books: Double Indemnity and Kim Addonizio’s brilliant poetry collection, Tell Me.)

The book is briskly paced, deftly executed, with brilliant dialog and a well-researched and richly detailed high-tech heist at its core. But what makes it truly unforgettable is the writing, especially the characters.

Consider the following sketches, which are deceptively simple:

Of Hiller, the hapless hero: He was middle-aged, with thinning hair, but there was something of the schoolboy about him. It was the tweed suit, ready-made, from a High Street tailor’s. The sort of suit you bought on leaving school for your first job. The man had kept to the same style ever since, though heavier now in the stomach and seat. And he’d looked after them well, as he walked he kept the suitcases carefully away from his trouser creases.

Of Hiller’s stepson, known only as the boy: He was small, the back of his head was soft and rounded. But his face was pale, sharply pointed with the effort of being eleven years old.

Of Anna, a former high-priced call girl (“on the game, what you’d call the big game, South Africa and the Bahamas”): She wore no make-up, she was strangely neutral, like a fashion model walking from one job to another, her face and hair in her handbag, and no expression for the journey in between.

Of a minor character, a shop clerk: The man was grey-haired. He had bacon and a suburban train-ride on his breath, and he caught the smell of whiskey on Hiller’s.

Even the setting descriptions enhance character, in this case Hiller’s again:

The room, when they reached it, was small. There was an old striped carpet, and a basin in the corner held up by its plumbing. Hiller went straight to the window. He stood close to the glass and smelled the sourness of other people’s breath. Across the street he saw the four houses in a row that were empty, their insides gutted and piled at the kerb, their insides dark. And Hiller felt safe. No-one could see he was here.

But the book rewards most poignantly in the interactions between Hiller and the boy, specifically the stories Hiller tells him to keep him entertained—stories about Lulu Land, where they only had Wagner on the jukebox, and about the Princess, who only smoked French cigarettes and was beautiful when she wasn’t looking.

In one particularly revealing bit of storytelling early in the narrative, accomplished with sly indirection, using subtext beneath the dialog, we observe Hiller’s struggle with drink and his tender if troubled relationship with the boy; we see flickers of mawkish anger beneath his wit, especially anger at vapid bourgeois pretension—and resentment of the financial success that has eluded him, or which he himself has sabotaged; we learn of the Princess, who is the boy’s mother, and the infatuation they share for her, despite her cruel desertion of them both; and we feel that desertion bitterly, even though (or perhaps because) its extremes are merely hinted at.

The other great joy of the book is watching Hiller’s character solidify—and his love for the boy deepen. It’s easy to assume that Hiller is doomed, because of the feckless oblivion that’s led to his involvement with men far more ruthless than he realizes. But it’s not as simple as that, and Hiller is not that simple a man. His fondness and concern for the boy crystallize with a mutual realization that they only have each other, and it’s never been otherwise.

Hiller engages me in ways more conventional mystery/thriller heroes just don’t (which no doubt explains a great deal about my career). He’s not just the clichéd “tarnished hero,” nor can he be tidily tucked into the anti-hero drawer. He’s a recognizable man with a complex past and an insidious, almost overwhelming problem in the present, caused by his own thoughtless flirtation with darkness, his ongoing accommodation with despair.

And by the end he isn’t the same just more so, like so many heroes one comes across, especially in the genre. Without giving too much away, he achieves a distinct nobility, that of a man who gets up off his knees—if only to prove he can. 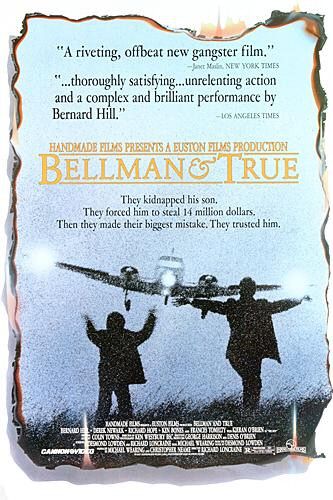 Note: The film was remade (and butchered) for American audiences by the same director (Richard Loncraine) with Harrison Ford in the lead. Curiously, this version, titled FIREWALL, includes no mention of Lowden in the credits. When I mentioned this to Don Winslow, he conjectured that Lowden got paid and “told to fuck off,” an all-too-frequent arrangement in the film world. Oh, and the American version is godawful. Harrison Ford has never sleepwalked through a performance more shamelessly. He looks like he’s expecting every scene to climax in an enema.

So, Murderati: Are you drawn to heroes with a crucial flaw, one that renders the likelihood of their prevailing always in doubt? Or do you prefer knights of a conspicuously whiter and more reassuring shade? In either case — why?

And ever notice how easy it is to mistype herpes for heroes?

Last–yes, I recognize the parallel between Hiller and the boy and my father and me—though I didn’t until Monday, when I wrote this piece. Talk about oblivious. Sheesh…

Jukebox Hero of the Week: In keeping with my theme, here’s a video of Bettye Lavette, who for almost 40 years wandered the desert of R&B obscurity, until she gave the following performance of The Who’s “Love Reign O’er Me” at the Lincoln Center, and revealed not just that the woman has a soulful voice, but a cagey, fierce, indomitable spirit: