I wouldn’t call myself a connoisseur of men, exactly, or a gourmet, or heaven forbid, a gourmand.

But I do, well, notice them.

One of the not-so-often-talked-about perks of the author life is that you are thrown in with some of the most fascinating, charismatic and fun males on the planet.

The variety is staggering.  Just consider our own men of Murderati.

The oh-so-cool and oh-so-soulful Steve Schwartz. Well, who wouldn’t melt at the Kerouac/Cassady beat aura, the rhythm of a musician, that leather jacket?

Dusty Rhoades, an earthy, sexy bear of a man who calls himself a redneck when no redneck was ever so smart or so freaking liberal – but who you can see strangling a man with one hand if he ever even THOUGHT of messing with one of Dusty’s friends.

David Corbett, so scary smart you want to whack him, but he’s carried noir elegance into present day and has the street cred to back it all up. And loyal as the day is long.

Gar Haywood, the sophisticated chameleon, who does “urban” noir and heartwarming cozy with equal skill – always the coolest man in the room but OH, you would not want to cross him and get caught in the fire. (Or would you?)

Jonathan Hayes, who you KNOW could introduce you to a spectrum of sensual delights usually reserved for Arab men in patriarchal cultures who die gloriously in battle and get 100 virgins and the world’s best chefs working around the clock for them or something like that.

Ken Bruen, the Irish poet. I don’t know how any of the rest of us even have souls of our own: it seems to me that Ken has the keeping of the universal soul.  There is no harshness in this man, he is beautifully, truly himself to the core.

Expanding into the greater community. . .

Lee Child, every woman’s fantasy of James Bond but OH so much more interesting.   As radical as the day is long, and people call him shy but HAH. I’ve never met a man more capable of making any woman feel she is the most fabulous thing on the planet.  Reacher is a pale copy of the creator.  Plus he has that dreamy brother, the dreamy Andrew Grant, who has his own sleek spy thriller cred.   Lee or Andrew?  Andrew or Lee?  Or . . .  well,  that kind of speculating could keep a girl busy for a long, long time.

Harlan Coben. The ultimate family man with bad boy written all over him.  He will drive you insane by telling you the absolute truth about why you are not where you should be as a writer, and then tell you the exact thing you need to know to get to the next level, driving you even more insane, because he’s right.  I love his passionate meltdowns on panels, they’re worth the price of admission to any conference.

Joe Konrath.  If you can keep from killing him on first contact (or tenth), the most fun anyone can have standing up. Brilliant, visionary mind, nail-biting writer, and a sense of humor that will keep you young if you have the ovaries to survive it.  An earthy life force, and one of the only men who understands that all a woman wants on the dance floor is for you to be out there on it with her.  He would deny he is a good guy but I know better, and if you don’t, you’re missing out.

F. Paul Wilson.  There is nothing this man does not know or cannot do. A practicing doctor AND genre-bending bestselling author AND serious drummer and wonderful actor; the sweetest man on the planet, as well as the most wickedly funny. You can rock out with him to ass-kicking Cajun music in a down-and-dirty Zydeco club on Bourbon Street, and talk to him about Deism while the band is taking a break.  A prince among men, and that’s no lie.

Barry Eisler. Well, what can I say – that hair!  No, there’s so much more to Barry. So much gorgeous and talented in one package would be insufferable if he weren’t so passionately political.  Get your mind out of the gutter and take a look. Barry has a moral compass that could lead us all.  If there were a zombie apocalypse, I’d want him rebuilding the world.

Speaking of Hollywood gorgeous – Marcus Sakey.  All right, I always had a thing for Starsky, so sue me.   But Marcus you can’t hate either, he’s the real deal. Uber-talented, doesn’t miss a trick, and a great guy – I’d love it if they’d just clone him.

Blake Crouch – hmm, can’t say anything here, I’m practically certain I could get arrested.  But someone so talented (writing AND music), so sweet, so fun, so loving, and so YOUNG, is going to rule the world any second now. And I’d be happy to have him do it.

We have men in this community who can turn you into a puddle just with their voices (Reed Farrel Coleman and and Gary Phillips)  There are brilliant soulful poets you want to save, while the more conscious half of your brain is saying they will destroy you if you stay a second longer at the bar (fill in the blank…)

I could go on and on and ON.  But there’s one man you might not be as familiar with as the others, while I, being the cross-genre slut—uh, wench—that I am, have had a little more exposure. And this is one you NEED to know.

Rocky Wood is the current president of the Horror Writers Association, and the author of  Stephen King: Uncollected, Unpublished (Softcover), Stephen King: The Non-Fiction, Stephen King: A Literary Companion, Horrors: Great Stories of Fear and Their Creators

Rocky is a born New Zealander, current Australian, and believe me, Hugh Jackman and Russell Crowe have nothing on him. They so very seldom make men like this anymore, it’s tragic. If there’s any point of cloning at all it should be to make more of these.

First of all, there’s that accent. But that’s just window dressing, really.

He is charming in the way that the most charismatic movie stars I’ve met are charming.  He is totally present and focused in exactly the moment he is in, and on the person or group he is with. He has an aura that is sexy and smart and just beyond what you see in the real world.

You are drawn to the accent and his intensity, first, and the charisma, and then you very quickly start to realize that this is a wonderful person.  An exceptional person.  That whatever you thought you were rushing off to do can wait, possibly forever, because you really need to be right here and just find out who this person is.

They say about certain gurus and great spiritual leaders, like the Dalai Lama and Mother Teresa, that you feel uplifted just as they walk in the room. That their physical presence changes your own auric vibration. Well, that’s Rocky.

All right, here comes the hard part.  And if you’re not sitting down, maybe you should, because when I say hard, I mean hard.

Rocky has ALS, otherwise known as Lou Gehrig’s disease,  or Motor Neurone disease. It is an evil, insidious thing. It turns the muscles to soup. There is no cure.

The news of this, this year, made me want to take whatever pills that would get me out of this life as fast as I could exit it.  It made me wonder what was the point of anything at all.

Horrible things happen to good people all the time. No one can tell me that there is not actual evil in the world.

But this is one of those – THE PERSON WHO LEAST DESERVES THIS SCOURGE – events.

So what is anyone to make of something like this?

Believe it or not, I’m not going to be dark about it.  I had that phase a while ago.  I’ve moved on, to two basic thoughts.  Which actually might be in opposition, but here they are anyway.

1. The perfect cure can happen instantly, tomorrow, this afternoon, this second. Miracles happen. Not consistently, but they happen.  As I wrote in THE PRICE, and as I believe (on good days): “If one miracle has ever happened in the world, why not this one, for you?”

Don’t get me wrong, I love my body, it gives me great pleasure, and I’m happy to know that it gives other people great pleasure.  But it’s so very heavy.  I have to think that there is a lighter kind of existence, and that it’s a much better existence.  I do enough yoga to believe that, with every cell and neuron in me.

And if this is true, it is not such a hard or horrible thing to have a fatal disease. Anything that is what the Hindus call Moksha: liberation, release from the earth plane, is a blessing.

(So I’ve gone from the ridiculously sensual to liberation from the physical body.  How’s that for a blog post?)

But since we’re still on this plane, a bunch of Rocky’s friends, who happen to be pretty incredibly great writers, have contributed a passel of short stories to a collection called RAGE AGAINST THE NIGHT, edited by Shane Jiraiya Cummings, with short stories by Stephen King, Ramsey Campbell, Peter Straub, F. Paul Wilson, Chelsea Quinn Yarbro, Sarah Langan, Scott Nicholson, and many more. My short story, The Edge of Seventeen, is reprinted in the book, too. You may be especially interested in a story by Stephen King, which details a deal with the devil that Rocky would never make: passing this kind of illness on to another human being. But the book is also packed with tales from rising stars in the horror genre you may not be as familiar with.

The price is $3.99, and all proceeds go to buying Rocky an eye gaze machine, a miraculous device that allows which allows the severely physically impaired to communicate via eye movements.

Rocky has already made arrangements to pass the machine on to another family that needs it, because that’s the kind of man he is.

No one knows what will happen tomorrow.  I may drop dead long before Rocky does. Any one of us could. What I do know is that anyone who has not known this man is the poorer for it.   I hope this post will go a small way toward correcting that.

Thank you for reading. 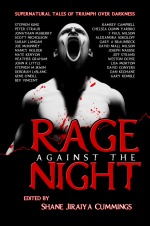 RAGE AGAINST THE NIGHT:

In the coming weeks, the anthology should be available at all good online retailers, and the print version will be available in January.

Under the onslaught of supernatural evil, the acts of good people can seem insignificant, but a courageous few stand apart. These brave men and women stand up to the darkness, stare it right in the eye, and give it the finger. These are the stories of those who rage against the night, stories of triumph, sacrifice, and bravery in the face of overwhelming evil.

32 thoughts on “Men of Mystery/ Rage Against the Night”