I’ve finally started reading THE GIRL WITH THE DRAGON TATTOO.

How I’ve managed to go this long without knowing the actual storyline of the book is remarkable – especially since it was the very first ebook I ever bought. I haven’t read a single review. I don’t know any details at all. I know it swept the world away, but today, 100 pages in, realizing it’s a story about  a missing woman… the set up seems utterly prosaic. Though I am invested in the story, I am afraid to be disappointed by going forward and finding that this is simply a regular tale, one not mythic, not life-changing, not genre-transcending.

All of that is in direct conflict with the books’ backstory, and current about to be a blockbuster movie status. The dead author, one who’s been in turns accused of gross misogyny and tender enlightenment, who witnessed a girl’s rape in his teens and by all accounts spent the next 15 years trying to rid himself of that mental horror. The battle for his estate. The films, heralded, revered, and soon to be released in the US. In all honestly, I didn’t feel there was any way the book could possibly live up to the standards of which the media shrieks set forth.

But how could that be? The idea that this book (these books) aren’t supremely special in some way is anathema to me. There must be more. There has to be something unique and brilliant about them, or else they’re just another mystery and we’ve all bought into the hype and that ultimately lessens the craft.

What, at its most base, is this whole spectacle about?

A story that explores the mystery behind a missing girl.

When I realized that, I went – That’s it?

No way. There is so much more to this story – I can already see that. And as I read, all the bits and pieces from the past few years, the details I’ve purposefully obfuscated, are coming into focus.

I didn’t want to read this book. I’m not sure why. I adore a good thriller. Maybe it’s because I’d just tried and failed with Jo Nesbo’s REDBREAST (just wasn’t in the proper intellectual space at the time) and the whole Scandinavian thing scared me. Or maybe it was the warnings about the financial stuff at the beginning. Being told the first 50 pages of a book are boring, but to stick with it isn’t exactly the way to get me on board.

I’ll be honest, I bought it, and I’ve glanced longingly at the cover several times, but it wasn’t until the US movie casting that I decided I was going to give this a chance. The whole Daniel Craig as Blomkvist is a beautiful thing, but that wasn’t it. It was sweet-faced Rooney Mara, who was asked to transform into hard-edged Lisbeth Salander. 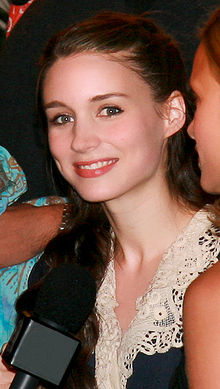 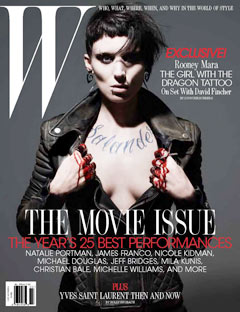 It was that transformative process that got me interested in the story, in actually finding out what all the fuss was about. For at one time, Lisbeth Salander was, on the surface at least, a fresh faced ingénue as well.

The choice to mar flesh is one made for a variety of reasons. I have several piercings and a couple of tattoos. Unlike many babies I see nowadays, I wasn’t allowed to pierce my ears until I was ten – and that event stays firmly lodged in my mind. My hands shaking on the long drive to the store. The smelly black marker, perfectly aligning the spot where the needle would go. The cold alcohol wipe. The sharp snap of the gun shooting the hard metal through my tender lobes. The euphoria when they held up the mirror and the two twin glints peeked from either side of my head. I felt like such a woman walking out of the mall with my small gold studs. I couldn’t stop looking in the mirror. At my birthday present. The marking of my flesh for the first time.

There’s something quite… addictive about it. Ask anyone who’s pierced themselves and they’ll tell you. Tattoos too. It’s strange, really. Incomprehensible to some, yet—dare I say?—a turn on for others.

I didn’t feel the lure to mark myself again until I was in my teens and decided to double pierce my left ear. Not both ears. Just the left one. The asymmetry appealed to me. Unbalanced. Off-kilter. It fit my personality.

The method was exactly the same as six years earlier. I felt that same rush.

My father, on the other hand, had kittens. Several litters, in fact.

Eventually he forgave me, in the form of a gorgeous little diamond. Just one. Only for that spot. I wore that stud in my left ear for years, a secret acceptance from him, the first true acknowledgement of my autonomy, the powerful knowledge that I could be myself and yet still be loved, and was heartbroken when it was stolen, along with the small diamond earrings my grandmother gave me for graduation, on my honeymoon.

I haven’t worn a diamond in its place since.

The next marking came in the form of a triple piercing in that same left ear, which I let close soon after, because it just looked strange to me. But in ’95 I went for something different – a helix, through the cartilage atop my left ear. I still have that piercing, a small silver tension hoop. I’ll never take it out.

The belly button was next – it took separate piercings to get it right, too. Then the tragus – that’s the bit of cartilage in your ear closest to your face. I wanted to do my nose too, but Darling Husband drew the line.

So I started on the tattoos.

Trust me, as good little pearl-ed, bow-ed, preppy college republican was replaced by the hippy Goth artist within—replaced, ha. Eradicated is more like it—the folks around me started to wonder.

Why, exactly, was I doing this?

That is a very hard question to answer.

A, I think it looks cool. B, while having needles poked into your flesh hurts, it’s a different kind of pain. C, there are times you want to make sure you remember. Good times, and bad.

The first tattoo, the Chinese symbol for strength, was designed to give me just that, a tangible, physical, always apparent symbolic reminder to stop, breathe, and remember that my strength comes from within. It was a very serious tattoo. The second, the symbol for rebirth, was inked when I felt I’d achieved that exact moment of true inner strength: the stasis of my life was suddenly over and I was hurtling forward into the world I live in now. It is a joyous mark, and I had no idea until later that the combination of the two meant Phoenix Rising. From the ashes. I couldn’t have picked something more apropos if I tried, and as such it means so much more.

The little purple butterfly I just thought was pretty, but as our Alex pointed out to me years after the fact, apparently my subconscious needed the evidence of that shattered chrysalis in a more permanent form. It is a delicate little fancy.

I was five tattoos in when I realized I may have gone to far. I had wanted an Ichthys on the inside of my foot below my left ankle, but was talked out of it. (Tattoo artist: “I can’t guarantee this won’t rub off eventually.” Me: “Well, then I need to do something different – I want something permanent.”) Idiots, the both of us. He wanted to get paid more and I was too naïve to realize it. I ended up with what was supposed to be a rising sun but instead we referred to as the Death Star – and he did the colors backwards so I had to have it redone. Two layers of ink – one orange, topped with red and yellow.

I chose to remove that one, a process which more than made up for my idiocy by putting me through some of the worst pain I’ve ever experienced. I do hear removal is better now, but at the time, I was a laser stricken guinea pig.

The phantom of that tat lingers on my left ankle. One day I’ll go to a cosmetic tattoo artist and have them ink the areas that hyper pigmented back to a more natural skin tone. But for now, it’s a reminder to me to think things through a little more. To look before I leap, which isn’t the easiest thing for me.

So I’m settled at five and one-half piercings (the tragus I stupidly removed trying to endear myself to some Nashville Junior Leaguers and it closed up, but I’m going to have it redone) and three tattoos – the small butterfly in profile on my left shoulder blade, and the two Chinese symbols on the inside of my right ankle. I adore all three and would never, ever mess with them. The ankle especially.

That doesn’t mean I’m not considering a fourth, one in a slightly less obvious place so I wouldn’t have to show it off if I didn’t want to.

A dragon is always foremost in the considerations.

Which brings me back to Mara Rooney, about to be immortalized as the girl with the dragon tattoo. For the movie, the piercings she did were all real – lip, brow, nose, nipples, four holes in each ear. The tattoos are drawn on, but the piercings – that took some guts. If you don’t have this particular predilection… well, suffice it to say, I’ll be a fan of the movies because of what Rooney did for her art. 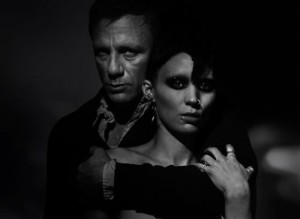 I haven’t finished the book yet. But I already like Lisbeth. I’m rooting for her. And now I’m dying to find out exactly what each of her markings are about.

Have you marked yourself in some way? Do you regret it, or are you glad for it?