Dudes, I am sooo sorry, but I’m going to have to re-post an old favorite of mine.  I’m in VEGAS with the family and there’s just no damn way I’m going to spend all night trying to write something wholly unique and insightful.  Not after three margaritas, I’m not.

So, here’s one I’ve always loved…. 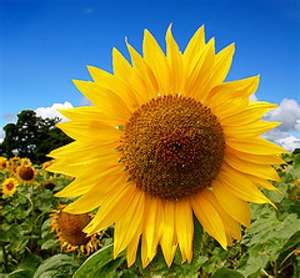 My eleven year old boy opens his eyes and sees the world he wants to see and magically it is there. I remember I was once like that, when I was a boy younger than his years. The magical optimism slowly faded as I encountered adults who knew better, men and women who’d correct me when I was wrong. As the years advanced I grew up to become an optimistic realist, but a realist none-the-less. Although it is easy to slip into the slough of the cynic, I’ve generally fought to keep a “glass half-full” attitude.

Thing One: Noah’s favorite flower is the bright yellow sunflower. My other son, Ben, saved a couple seeds from destruction and planted them and they sprouted. Their little green stems grew and dangled and needed help and I convinced Noah, who had taken over the project, that we should tie their little vines to a tongue depressor with a fuzzy little pipe-cleaner from his arts and crafts supply kit. He trusted me (I’d taken a class called Greenhouse Management when I was in high school, which was really the slacker’s way out of taking Biology II) and I tied one of the nascent plants to the wooden stick and just about broke it in two.

The plant was a goner. I’d broken it in such a way that just a sliver of green connected the top to the bottom. It was only a matter of time before it would turn brown and shrivel up like a sun-stroked earthworm. I put a little Scotch tape around the break and prepared my son for the worst.

“I’ve lived a lot longer than you, kid, and I’ve seen things. Experience tells me that plant is going to die.”

And sure enough, somehow, that plant sprang a sliver of green glucose cells and built an elbow to tie the two halves together. Now this little plant has grown thick and strong and healthy. It continues reaching for the sky today. In all my year of Greenhouse Management I never saw such a miracle.

Thing Two: While cleaning our fish bowl I accidentally let the fish (a beta) fall into the sink among the dirty dishes and general scum. I tossed the dishes to the floor, yelling, “Shit! Shit! Shit!” until I’d found the flopping creature and, after several tries, grabbed and tossed it back into the fish bowl.

Experience told me this story wasn’t going to end well for the kids.

Sure enough, a couple weeks later the fish developed a brown scab on the left side of his body. A couple days after that the scab appeared on the right side as well. It took another day for one side to eat into the other, creating a gaping hole.

There was a hole in our fish.

Experience told me this was not a good sign. The hole grew larger in the coming days and soon the fish stopped eating.

“I’m sorry, Noah, but this doesn’t look good. I think you should say your goodbyes.”

“I don’t know, I’ve lived a long time and I’ve seen things. My gut tells me it’s time to pull the plug.”

Taking a stab in the dark I suggested that maybe the local pet store had something to “fix the hole.” Sure enough, my son came back with a bottle of what I considered to be voodoo googlygock with instructions to add ten drops to the bowl, twice daily. We began treatment immediately.

The substance seemed only to blacken the water, creating a charcoal haze in which our fish would spend his final days. And the hole remained. I mean, I could see the toaster oven through the fish. I was surprised the thing had lasted this long.

And then the fish began to eat.

Days later Noah said that the hole was growing smaller. Ah, life through the eyes of a child, I thought as I peered down to study the beta. But he was right, the hole was smaller.

It’s been a month since this thing began and the hole is nearly gone. The fish, which was old to begin with, is older still, yet appears as healthy and playful as a young fishling. Maybe the playful part is my imagination talking, but he sure looks fit.

The point, if I may return to the purpose of writing this blog, is that my “realism” was really cynicism in disguise. If I had gone with my instincts, i.e. my experience, I would have seen that sunflower sapling strangle our fish in a whirlpool of toilet water as they made their way to the city sewer. I would have euthanized them to save myself the trouble of watching them die slowly, over time.

I didn’t know there were any other options. An eleven year old boy told me there was.

I think these two occurrences illustrate the fact that we occasionally need a paradigm shift. In my case, I needed to adjust my concept of what is and isn’t real. The way I lived my life had been tainted by negative experiences I accepted as truth. Noah did not have those experiences and he was strong enough to resist them when I suggested they were universal truths.

Maybe optimism is just a way of seeing life as it should be, and then participating in its positive outcome. Maybe a person’s good fortune is anchored by his positive attitude.

My boys will encounter great struggles in their lives. It’s unavoidable. They’ve already experienced the loss of their home. The negative effect this has had on their personalities has thus far been minimal — they veered toward the positive. Life in an apartment isn’t tough, it hasn’t stopped them from doing the things they love, like hanging out at the beach and enjoying their music and art classes. If anything, it’s removed some stress from my life, which removes stress from theirs.

I hope their optimism continues to flourish. I hope the people they encounter, the ones who thrive on gossip and negativity, won’t have an impact on their development. And I’m glad as hell my boy was there, like a young bodhisattva, to teach me the ways of the world.

Also, I wanted to plug a wonderful new ebook compilation edited by Edgar-nominated author Timothy Hallinan called MAKING STORY: Twenty-One Writers on How They Plot, in which I’m one of the featured authors.  You’ll read a bunch of wonderful authors writing about how they begin the process of establishing STORY.  It’s a really great resource and, at $3.99 on Kindle, a great price.

Thanks again for letting me off easy this week.