I’m a pretty good liar, especially on the spot.  Someone can toss out a subject and I can pretty much tell them some convincing facts about history, science or the arts—none of it true.  Hmm, I wonder if I’m related to Dan Brown to me.

This is, of course, great when it comes to telling stories.  I’m not lying.  I’m just flexing my fiction muscles.

Where things go a little awry is when it comes to telling the truth.  Lies need polish and racing stripes.  The truth doesn’t.  It’s naturally shiny.  But I struggle when faced with telling the truth.  It looks so vulnerable and naked when I tell it and in most cases no one believes me when I do tell the truth.  The other week someone told me they didn’t believe my pieces about having to crash land a plane and falling off a mountain were true.  They bloody were and I have evidence to back it up.

A few months ago I had a run in with Julie over my truthfulness.  I’ve pulled the wool over Julie’s eyes so many times that she doesn’t have a fear of blindfolds.  She’s used to my fibbery.  This time, I ran into a little problem.

Now that I work from home, I’m a little house husband and I do the laundry and things.  Laundry is a task I don’t mind.  I find it quite therapeutic when I’m working a story idea out in my head.  So, on this particular day, Julie came home to nice, neat piles o’ laundry.  Please place Simon in the good books section of Julie’s world.  I was typing away and Julie came in.  I expected to get my good boy pat on the head.  Instead, a pair of scarlet ladies underwear hit me in the back of the head.

“Whose are they?” she demanded.

I peeled the knicker cap off my head, examined them and said, “Yours?”

Well, they weren’t mine.  They were these tiny little Victoria’s Secret things.  Not my style for sure.  To settle things down, I said the one thing I thought would calm her.  “I don’t know whose they are, but you have them.  Finders keepers and all that.”

“I don’t want somebody else’s underwear.”

I went to say they were clean, but didn’t think this would resolve the issue.  So I shrugged.

“I want to know whose these belong to,” she demanded.

This is where I panicked.  The truth was, I didn’t know who the knickers belonged to and me proclaiming my innocence didn’t seem to be working.  I should have lied at this point and told her I was holding them for a friend or something, but I scrabbled for an explanation and came up with, “Maybe they’re your mum’s.  She house-sat for us the other week.”

“My mom doesn’t wear these.  Have you had someone here?”

“Tell me the truth.”

“Then how did these things get in our laundry?”

“I don’t know.  It could be a trick.  Maybe someone pulled a prank on me.”  I said this as if it was likely that one of my chums would get back at me by dropping the naughty undies in my gym bag.  I tend pull pranks on others.  Payback is a female dog.

“Then I suggest you find out.  That’s your task.  Find out who owns these things.”

“I’ll get on it straight away, my petal,” I said, but Julie had left the room.

I’d told her the unadulterated truth (ew, bad choice of word there) and it didn’t sound very convincing.  I didn’t know how to be more convincing.  If I had been lying, I would have done a great job of having a story lined up with backup lies on hand.  I’m a totally interactive liar.  So very now.  But my truthiness (thanks, Stephen Colbert) sounded so lame it needed shooting.

Like a half-lit firecracker, I gave Julie time to cool off.  I snuggled up to her on the sofa and asked, “You do believe me, don’t you?”  She told me that she did but in one of those clipped tones that said otherwise.  I gave her another ten minutes and asked her again and got the same tight answer.  For the next hour, I repeated my question every ten minutes or so.

“If you keep asking, I’m going to start doubting you.”

I stayed quiet after that.

I asked my lady chums if they’d played a cruel joke on me and all replied that they hadn’t.  This news didn’t please Julie.  She was leaving on a business trip that weekend and she left me with instructions to get to the bottom this issue.  My Sherlockian skills narrowed it down to Julie’s mom.  Julie didn’t want to ask her mom for obvious reasons.  If they weren’t her mom’s, then her mom would think of me as a cheater.  A thorny issue.  Anyway, Julie left for trip.

About an hour later, I received a call from Julie.  “I talked to my mom.  They’re hers.”

Not one to gloat, I told Julie she could apologize any time she felt like it.  Oddly, she hung up on me.

When she returned from her trip, I chatted to her about our knicker mystery.  I reminded her that I’d been right from the beginning.  I said I was little worried that she thought I might be a cheater.

Julie said, “I had total faith in you and I only threw the underwear at you for a joke, but when I asked for an answer, you looked completely guilty.  You were telling me you didn’t do it, but all I saw was guilt.”

And there lies the problem.  My honest face is real shaky.  I know why.  I didn’t have a good story to back up the truth.  My “Dunno” defense felt as weak as it sounded, but the issue at hand wasn’t something I wanted to lie about.  In retrospect, I should have embellished in some way.  I would have come over more convincing.

I wish I could say my truthfulness hasn’t gotten me into trouble.  Oddly, my lying never has.  I’m not sure what that says about me, but I’m guessing it’s not good.

You believe me, right?

Yours truly,
Simon Wood
PS: CrimeSpree Magazine interviewed me in their latest issue and you can read it here.

15 thoughts on “Lying to be honest”

@MollyJongFast So is watching his supporters call for a military coup and execution of people who disagree with Trump.

Arm yourselves, liberals. These people are coming.

Sidney Powell, who may or may not be one of Trump's lawyers, has called for a military coup via the Insurrection Act and demanded military tribunals to prosecute "election fraud." And no one on the right says a mumblin' word.

Be kind, even in disagreement.

Don’t forget to be a blessing for others. Some people suffer tremendously quietly and the only relief they might get today is your kindness.
Let’s start with twitter.

@KeithOlbermann So have I, and it was before Trump was even running. Anyone who opposed Dubbya's Wacky Iraqi Adventure in 2003 was branded a traitor and told they needed to be executed.

Happy Thanksgiving to meeeeeee..... guess what I spent the holiday weekend doing? Last pass pages of HER DARK LIES are being scrutinized. It’s so crazy to realize that this is my last change to fix or change anything before the book becomes yours. Finger… https://t.co/q00NCCjF1T 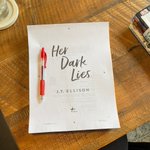 Reply on TwitterRetweet on Twitter1Like on Twitter9Twitter
Load More...