Happy Valentine’s Day, y’all.  Even though this is a pretty stupid holiday — originally linked to romance through a tale of birds hooking up, now propogated to sell greeting cards — I still sort of like it.  Remember those little paper cards we used to exchange in grade school? 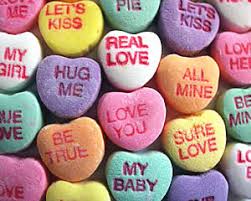 Those overpriced dinners at overbooked restaurants?  Oh, wait, that’s another entry on the con side of the ledger.

Anyway, I have enough fondness for Valentine’s Day that I wanted my blog to have some connection to the concept of overwhelming swooniness that we’re all supposed to feel this day.  The only problem is that talking about love sort of makes me want to hurl.  Don’t get me wrong.  I feel love.  I still get that little hiccup in my chest when I look at my husband when he doesn’t know I’m watching him.  But somehow I suspect most of you don’t want to read an entire blog post filled with sentences like that last one.  Ick, that’s sweeter than those Necco wafers.

A writer’s cynicism of the words we typically use to explain love might strike some as odd, but I think it stems from too many greeting cards, bad romance scenes, and sappy lyrics.  Love pulls you up weightless into the fluffy white clouds, turns you inside out, and then throws you on your ass, but in a good way.  Love is also so subjective that the previous sentence might not mean anything to anyone besides me.

I was trying to identify any other experience that feels like being in love.  The closest I came was that feeling you (or at least, I) get when in the presence of a truly magical musical moment.  I don’t simply mean ones reaction to a sappy love song (though this one happens to be a fave).

Every once in a while, I am so pulled in by musical talent, I can’t move.  I don’t want to breath, just in case the air moving into my lungs interferes with the magesty of that moment.  I want to stop time to linger in the perfection.  I want to be able to experience it again and again.

Have you ever had that feeling? I hope for your sake the answer is yes.

I suppose it would be impressive to say these moments came during O Patria Mia from the Verdi’s Aida.  But that’s not how I roll.  (In fact, I don’t know what O Patria Mia is.  I just found it on Google.)

My most recent love and music moment came last week when I saw Prince in concert at Madison Square Garden.  His incredible talent, the memories of listening to that music in high school, and my happiness about seeing him in New York with a good friend all culminated in one of those all-out weepy, goose-bumpy moments.  (Even though bootleg video won’t do the performance justice, I went hunting for a clip, which will probably be pulled by his copyright lawyers by the time you read this.)

Another performance that had me swooning was Fantasia’s tribute to Patti LaBelle.  I know.  It sounds as bad as a puppy on a unicorn, but, damn, that woman can sing.  And somehow through all those notes, she manages to convey the utter respect and love she has for Miss Patti.  Check them out and then try to tell me you don’t feel it.  (Make sure to hold out for the mutual lovefest starting at 2:04 and Patti’s awesome move at 3:39.)

And don’t forget Mary J Blige’s emotional performance of No More Drama at the 2002 Grammy Awards, which brought both the singer and members of the audience to tears.

Maybe I’m totally out there, but the feeling I get watching a singer put every part of himself or herself into a single experience makes me feel … love(ish).

So, here are my questions for the day:

1) Your verdict on Valentine’s Day: yay or nay?

2) Any musical performances that induce tears, chills, or paralysis?

24 thoughts on “Love and Music”