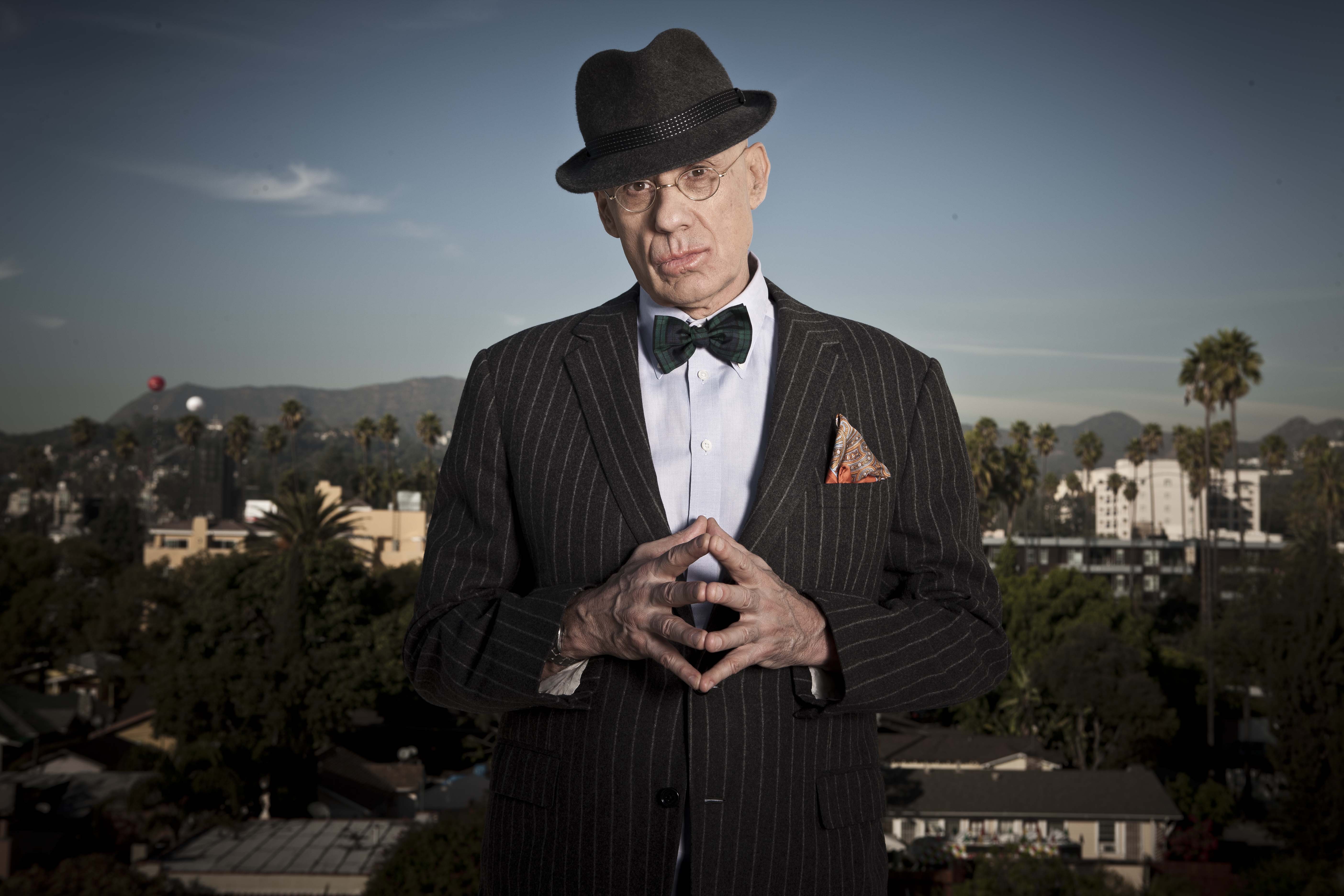 2011 started off with a “Bam!” for me when I was asked to join a press corps bus tour of L.A.’s historic crime scenes with none other than the Demon Dog of American Literature himself, James Ellroy.  I was one of two authors on the trip, the other being our very own Allison Brennan.  Allison and I met up at the Langham Huntington Hotel in Pasadena, had a bite and a schmooze then jumped onto the Demon Dog Bus with two-dozen journalists and the big man himself. 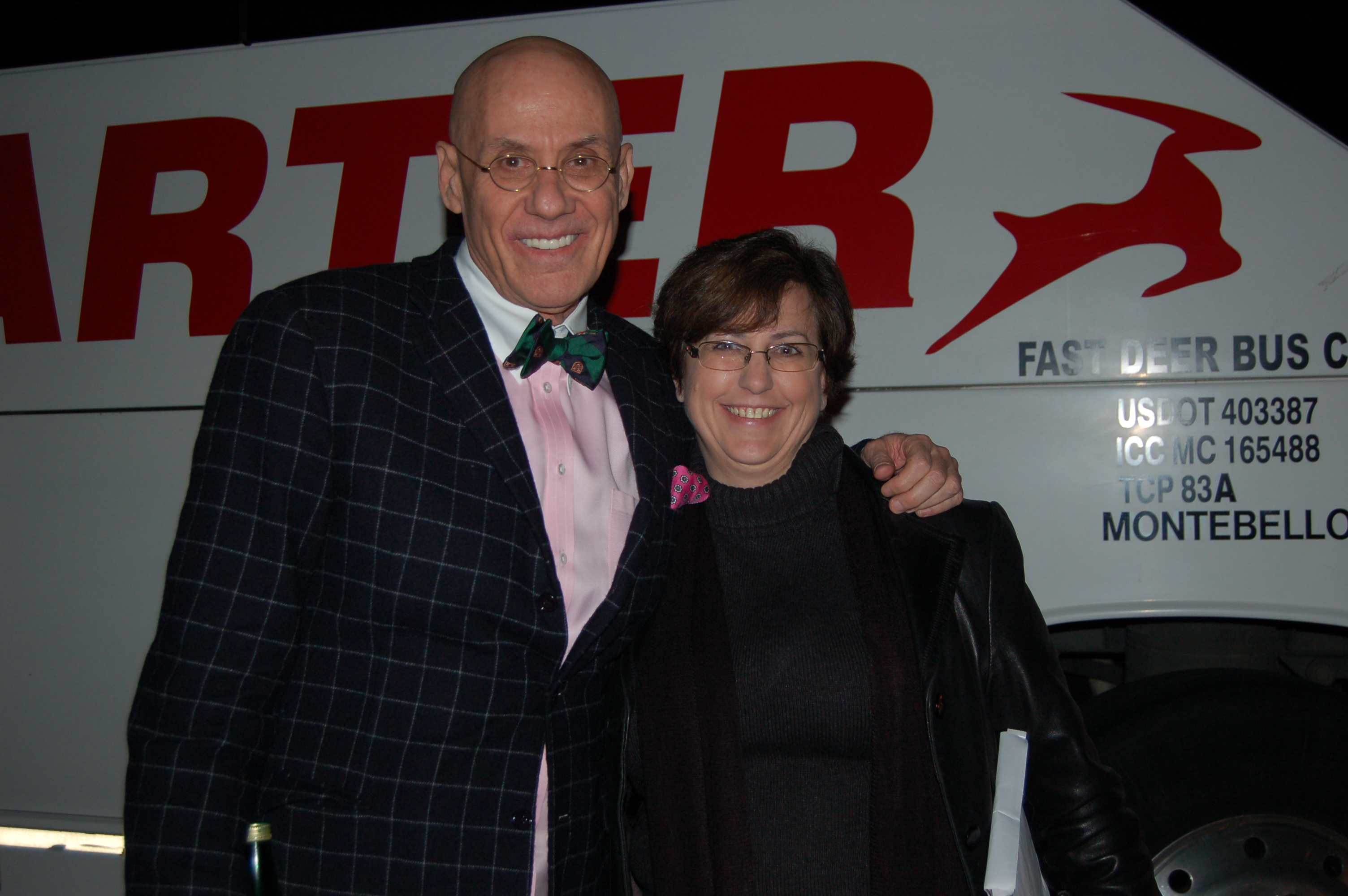 The event was cast as a promotion for Mr. Ellroy’s upcoming television series, James Ellroy’s LA:  City of Demons, which premieres January 19 at 10 pm (ET) on Investigation Discovery.  I feel comfortable repeating this information over and over again, considering our host, in classic James Ellroy form, hammered these words into our skulls as if they were the lyrics to the Star Spangled Banner.

The evening began with his now-trademark greeting, “Hello all you peepers, prowlers, pedophiles, pedants, panty-sniffers, punks and pimps!” and evolved into a raucous journey that became James Ellroy’s personal tour of Hollywood Hell.  “Crime is a gas and a goof and we all are lucky to live through it vicariously,” he said as we rolled into town, circling the levels of Ellroy’s Divine Comedy, stopping to see such sites as the spot where L.A. gangster Mickey Cohen nearly met his end to a failed assassination attempt (just outside the Roxy on the Sunset Strip), the front door stoop where actress Rebecca Schaeffer lost her life to the gunshot of an obsessed fan, and the house where Johnny Stompanato’s heart stopped the blade that was thrust into his chest by fourteen year old Cheryl Crane, Lana Turner’s only child.

All this to the sizzling, up-tempo narration of the L.A. Death Hunter, to the zing in his voice and the twirling gesticulation of his caffeinated limbs. The man’s a fucking dynamo.  A speed-ball.  A master of instantaneous alliteration and onomatopoeia.  And I tell you, he’s on his game.

The television series (premiering January 19th at 10 pm ET on Investigation Discovery) starts with a “Bam!” as well.  The intro is classic L.A. Noir, with loud, brassy music and tabloid shots of our devilish little city, capping it off with the image of a helicopter fleeing scenes of death and destruction as palm trees burn in the foreground.  It’s a playful, punchy, predatory peek into subterranean shitholes and backyard buffoonery.  I can’t help the alliteration—when you listen to Ellroy it all comes flying out.

As the show’s devious emcee, Ellroy enters scene at full-throttle, opening with, “Welcome to my wildly warped world of murder and malignant mayhem, crime and crazed passion, skanky scandals and scorching skin.  Murder is on our malevolent menu tonight!”

Episode One, called “DEAD WOMEN OWN ME,” takes a look at Ellroy’s transmogrification of his mother, Jean Hilliker (killed when he was just ten years old) with another victim of violent crime, Elizabeth Short (AKA the Black Dahlia).  Ellroy’s mother was sexually assaulted and strangled in a crime that continues to remain unsolved more than fifty years after the fact.  Studying Elizabeth Short’s murder gives Ellroy the opportunity to delve into the unresolved feelings he has towards his mother, whom he had “cursed” by wishing her dead shortly before that fatal night.  Her death influenced everything he did from that point forward, ultimately leading to his career as a crime fiction author.  As he says, the experience left him “tied, died, swept to the side, screwed, blued, tattooed and buffangooed.”

James Ellroy’s LA: City of Demons is vintage Ellroy, in-your-face and pimped with pizzazz. “Viewers are terribly tired of the trailer trash tragedies that caustically contaminate documentary TV,” he says.  “They wantonly want to groove, grok, gravitate and glide toward glamorous crime – and L.A. is where all that shimmering sh…stuff…pervertedly percolates.”  The show is a must-see for anyone interested in the darker history of L.A. and the seamy side of Hollywood.

However, as good as the show is (I’ve seen the first two episodes) it doesn’t compare to the experience of spending three hours on a haunted bus tour with James Ellroy as your guide.  I got the chance to learn some pretty cool things about the guy who alternately refers to himself as either the “Slick Trick with the Donkey Dick” or the “Death Dog with the Hog Log.”

I’ll share some of the tidbits I learned.  Of course, this is off the record, on the QT, and very hush-hush:

The outline for Ellroy’s latest novel, BLOOD’S A ROVER, was over 400 pages long.

Ellroy had six books published before he was able to quit his job as a golf caddie.

Ellroy was raised as a Lutheran.  Religious elements permeate his work – “In the end they are all stories of redemption,” he says.

Ellroy’s advice to women – be wary and put up a fight.  The ones who fight usually survive.

The most important male influence on Ellroy’s life is Ludwig van Beethoven.  “He was a messenger sent directly from God.”

And, finally, the thing that really sticks with me is the way he described himself as “living in the tremor of intent.”  The phrase comes from an Anthony Burgess novel, and Ellroy interprets it as living in a “constant assessment of meaning.”  He observes his world and asks, “What does this mean?  What does that mean?”

Fortunately, for us, he puts pen to paper and proceeds to answer those questions.  We’ve read the result, and it’s enduring.  If you haven’t read his work yet, then James Ellroy’s LA: City of Demons provides the perfect primer for previewing those perverted perceptions.  You’ll be glad you tuned in.  At Investigation Discovery.  Wednesday, January 19th.  10:00 pm, ET.

21 thoughts on “LIVING IN THE TREMOR OF INTENT”