There is nothing more remarkable than the moment you realize you are no longer a struggling debut writer, but a real live working author. I’m not quite sure I’d fully grasped that concept until now, as I begin the penultimate blog before my fourth novel goes on sale.

Trust you me, when I started blogging here at Murderati on April 7, 2006, when I had an agent but no book deal, I never dreamed that I’d be at this point. I’m not being modest, I really, truly, honestly never in a million years thought that in a mere four years, I’d be doing what I’m doing.

What I’m doing is writing book six, and thinking about book seven, and getting ready for copyedits on book five, and promoting the living hell out of myself and book four, and working on three shorts for anthologies, and remodeling, remembering to breathe and beginning my foray into a bunch of foreign markets.

A momentary aside: I am not kidding when I say that. I KNOW I’m blessed. Yes, I work hard, very hard. But there’s always an element of luck and timing involved in publishing, two things that have been in ready abundance for me. I don’t know why that is. I wish to God I could share it with everyone.

But that’s what happens in this crazy world. Sometimes, if you’re very good and very lucky, you get a break. Sometimes, if you’re very good and very lucky, you don’t get a break. It’s not fair. It upsets me to no end. I want everyone to be happy, published, self-sufficient. I know that’s not the case. Because there’s a downside to the good – friendships lost, sleepless nights worrying about what’s to come, the fear of a book’s complete failure. There comes a point where sharing good news can only be done with a few trusted individuals, because you don’t want to hurt anyone else’s feelings with your joy.

There’s a moment in the promotion schedule that I always hit – what in the world am I going to talk about with this book? I’ve been suffering with that malady tremendously with THE COLD ROOM – on its surface, it’s a novel about necrosadism, though there is so much more to it than that. There’s a secret in the book. Something that I don’t want to talk about – that’s not true, I DO want to talk about it, but I’ll ruin it for the readers if I do – so I’ve been stubbornly clinging to the mentality that I don’t have anything but that to discuss. I’ve had a horrible mental block on this, and we’re only three weeks from launch day. I have a punishing schedule of appearances and travel, and no matter what I want or don’t want, I have to talk about this book. I’ve tried to make notes, and nothing’s coming together. I am doomed.

And then my editor needed a series of questions answered for the Polish translation of ALL THE PRETTY GIRLS.

ALL THE PRETTY GIRLS? Hell, I haven’t even thought about that book for years. Literally, years. How am I supposed to think about that when I’m trying to figure out what to say about book four? And write book six? And remember to breathe?

So I got on a plane. Flew to my parents (it was a scheduled trip, but after the past month, and knowing what’s coming in the month ahead, I was really looking forward to being on a plane with no Internet for an hour and a half.)

I put on my earphones to discourage the negative Nelly next to me (note to flyers: NEVER open to your seatmate with a story about a plane crash. IT IS BAD LUCK!) settled in, and the second the bell dinged, I dove. I listened to some MUSE, some METRIC, then hit shuffle and closed my eyes. The first song that came on was Sarah McLachlan’s ANGEL.

Which is the theme song for book six.

Which I haven’t heard forever because I forgot I made it the theme song for book six.

Because I am an idiot.

And everything fell into place with one of those big huge cosmic CLICKS!

I suddenly remembered what I wanted to do with book six. I realized what I needed to talk about on the road for THE COLD ROOM. I remembered the joy and the agony of writing ALL THE PRETTY GIRLS, and where I was four years ago, no deal, no books, no worries. I remembered that I have people, people who love me even when I’m being selfish, who want so much for me and put up with my nonsense.

I found my center.

I opened my Moleskine and started writing. I laid out everything I wanted to touch upon during the tour. I worked on the standalone. I worked on a short story. I made notes on THE PRETENDER. I listened to Angel over and over, and the blood, sweat and tears I’ve been putting in for the past four years just flowed onto the page.

I got off the plane feeling better than I have in months.

2009 was a rough year for many of us. Ours was particularly rough on the non-JT side of the fence, but a great one for JT. Which threw a great big rift into my ability to keep the two separate. I’ve been spinning my wheels for months now – working but not feeling wholly involved, promoting but resenting it, writing but feeling a spark missing.

That fire relit itself on the plane, because I had to think back, truly reach back in my mind, to remember something about my debut novel. I’m sitting here on my parents couch, looking at the waves, remembering how it all began.

Funny how life works, isn’t it?

Next time, I’m going to bore you to tears with all kinds of details about THE COLD ROOM. It was the most difficult book I’ve ever written for a number of reasons, and I’m ready to talk about that.

But today, let’s celebrate someone else.

My friend Carla Buckley will join the ranks of published authors for the first time on February 9, with her fantastic debut THE THINGS THAT KEEP US HERE. I met Carla through the ITW Debut Authors Committee, and we were fast friends right away. I am so excited that her time draws nigh, and hope you’ll welcome her with a due accord (BUY THE BOOK!!!)

Here’s the officially skinny on Carla:

Carla Buckley is the debut author of The Things That Keep Us Here (Delacorte Press, February 2010.) Orion in the UK and Wunderlich in Germany pre-empted rights to her first two novels. Carla is the Chair of the International Thriller Writers Debut Program and currently lives in Ohio with her husband and children. 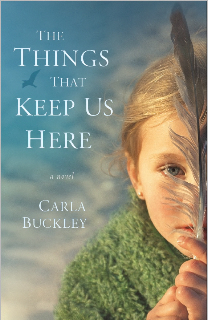 A year ago, Ann and Peter Brooks were just another unhappily married couple trying—and failing—to keep their relationship together while they raised two young daughters. Now the world around them is about to be shaken again, when Peter, a university researcher, comes to a startling realization: a virulent pandemic has made the terrible leap across the ocean to America’s heartland. And it is killing fifty out of every hundred people it touches.

Food grows scarce. Neighbor turns against neighbor in grocery stores and at gas pumps. And then a winter storm strikes, and they are left huddling in the dark.

Trapped inside the house she once called home, Ann Brooks must make life-or-death decisions in an environment where opening a door to a neighbor could threaten all the things she holds dear.

Whew! That’s the way to grab our attention, Carla. Many, many congratulations!

Wine of the Week: Bogle Phantom An outstanding wine for under $20 that is full, and ripe and utterly yummy!

﻿P.S: See how it all began! ALL THE PRETTY GIRLS is available as a free download! Stop by eHarlequin or my website to get your copy.

28 thoughts on “Leaps in Time (and other stories)”