So I’ve been rummaging through the undersides of things in my effort to consolidate the clutter of my life before moving from house to apartment, occasionally jumping when the call of “Spider!” comes from one of the other rooms, from one of the other family members, and my life-saving skills are required to take the thick or thin or hairy or spindly eight-legged offender out to the outside of the domicile where we, ourselves, will soon be outside looking in.

It’s a bitch of a time to get any writing done, and a few weeks after I started my third novel I find myself just ten pages in, ten solid pages, re-written ten times, but ten pages nonetheless.  My focus has been on the move and the day job and on finishing my tour for BEAT, which took me back to my hometown of Albuquerque, New Mexico, last weekend.  Writing will again commence Thanksgiving morn, when I’ll be looking at four ten-hour writing days in a row.

But I have during this time made time to read.  I tackled the works of Thomas Harris, picking up SILENCE OF THE LAMBS and RED DRAGON.  I was getting tired of being the only writer on the planet who couldn’t say that RED DRAGON was the best thriller ever written.  I’ve seen the title pop up in just about everyone’s Top Ten List, and I was at this year’s Men of Mystery when Greg Hurwitz was asked to name the best thriller ever written, and he said it would have to be RED DRAGON.

I read the books back-to-back, but backwards, diving into LAMBS first only because I was able to acquire it before DRAGON.

I was just a few pages into LAMBS when I got the cozy feeling that I was in the hands of a master.  It was revving up to be the perfect reading experience and I felt myself trying to slow things down, afraid I’d run into a bump along the way, something that might derail this wonder-train and break the illusion I was getting that LAMBS might in fact be the golden elixir of thrillers.  I zipped through the novel and was not disappointed.  It was brilliant, and in my opinion, a perfect novel.

I eagerly leapt into RED DRAGON, expecting the same.  And it was great, it was wonderful, but it wasn’t SILENCE OF THE LAMBS.

Both novels are compelling studies of characters in duress.  Perhaps what makes DRAGON stand out so much is its depiction of semi-retired FBI profiler/forensic analyst Will Graham, the physically and psychologically wounded man responsible for capturing the cannibalistic serial killer Hannibal Lecter.  Asked to return to the FBI to pursue another brutal killer, Graham first visits Lecter in jail, hoping to obtain a little insight.  Lecter asks him the question, “Do you know how you caught me, Will?”  He answers his own question thereafter, saying, “The reason you caught me is that we’re just alike.”  This statement haunts Graham through the rest of the book, and Harris does a bang-up job convincing us that Graham fears he has what it takes to be another Hannibal Lecter.

All of DRAGON’S characters are complex and believable and the science and procedural aspects of the book are spot on.  It’s a really great book, but it’s not SILENCE OF THE LAMBS.

What is it about LAMBS that captures me so?

First of all, it’s tight.  I’m a big fan of tight.  I’m a student of Jim Thompson, and his writing is honed down to the bone, and it moves.  We talk here at Murderati about “cutting out the stuff no one reads,” and Thompson’s work stands out as a shining example of that.  I read Thompson continuously as I was writing my last few drafts of BOULEVARD, and his writing taught me to constantly tighten and trim my prose.  His work proves that less is often more.  I’ve noticed that BEAT is a tighter, faster ride than BOULEVARD, and my new book is tighter still.  Soon I’ll be writing mystery-thriller haikus.

LAMBS is rich with detail.  It’s obvious that Harris has done his homework.  But the volume of research is presented with amazing restraint.  There’s no need to take the reader on long tangents into the history of profiling or forensic science.  No need to give us more than the very basics about Clarice’s boss, Jack Crawford.  Just enough to bring out character, without drowning the reader in backstory.  One beautiful little character touch comes in a narrative line about Crawford that reads, “Back at his chair he cannot remember what he was reading.  He feels the books beside him to find the one that is warm.”  There are little brushstrokes like this everywhere in the novel.

And don’t even get me started on the rich character descriptions of Clarice, Hannibal Lecter, Chilton and Buffalo Bill.  Every character, even the walk-ons, is unique and bursting with dimension.

Clarice herself is exceptional.  There is such complexity to her, in that she is a young, female, FBI trainee with a troubled past and a chip on her shoulder.  She’s refreshingly original and her sense of pride and justice are things to admire.  Match that with Lecter’s eerie, uncanny ability to peer into the recesses of everyone’s psychology, and you’ve got two of the best characters ever written.

In LAMBS, Lecter is a slippery guide and mentor, and, while he’s always out for himself, he finds joy in helping Clarice along on her path.  He plays a slightly different role in DRAGON, by actively helping the antagonist in Lecter’s own quest to destroy Will Graham.  This doesn’t feel like the Lecter I know from LAMBS.  It’s cleverly done in DRAGON, but it reduces Lecter’s role to something less than his potential, which is further developed, with greater satisfaction, in LAMBS.

The pacing of LAMBS was also more satisfying than in DRAGON.  LAMBS grabbed me by the throat and shook me almost to unconsciousness, then slapped me in the face repeatedly to wake me up.  It was a non-stop ride on a jackhammer.  And yet I still felt firmly planted in the story—the speed of the narrative didn’t come at the cost of losing the story’s foundation.  I still got the opportunity to peek into the world of the FBI, to spend time in Quantico, to learn about Clarice’s early life on the farm, her run from the glue factory, her desperate wish to live in a world of silence, where the lambs never cry.

And I had the opportunity to observe the smartest serial killer on the planet.  I don’t know if I’ll ever have Harris’ chops—Hannibal Lecter is the most interesting antagonist I’ve met.  There is more of Lecter in LAMBS, too.  He plays a more vital role in the narrative, and yet he doesn’t steal the story from its principal characters, Clarice, Crawford and Buffalo Bill.

Listen, I could go on forever, analyzing the structures of each novel, deconstructing every chapter and paragraph, explaining what works for me and why.  They are both great novels, but I clearly see SILENCE OF THE LAMBS in the top spot.

Let’s hear some comments.  What do you think is the best thriller of all time?  Why?

Also, my short story prequel to BOULEVARD is now available as a FREE DOWNLOAD from my website.  It will also be available on Kindle and other e-book devices beginning December 7. 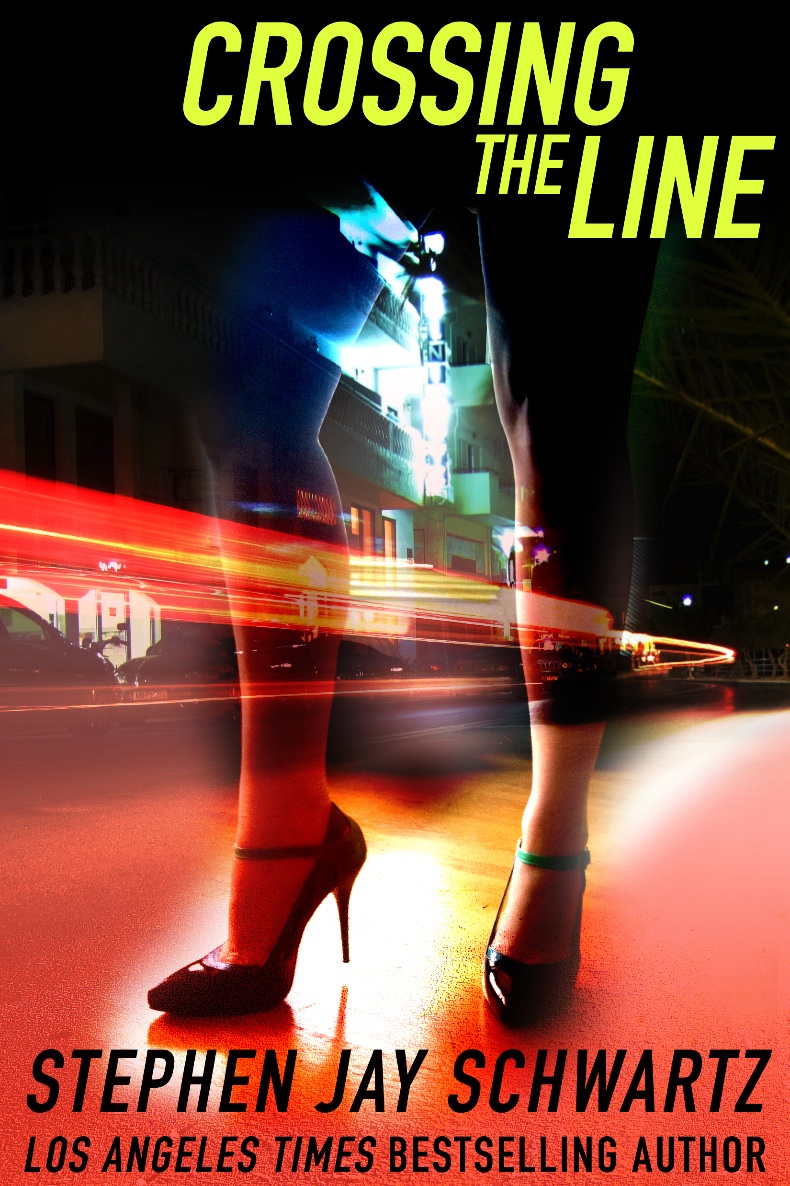 In CROSSING THE LINE, young LAPD officer Hayden Glass is driven to move quickly up the ranks at the department. Only one year in, he decides to pad his experience with a stint in Vice. But, with a marriage on the rocks and carrying the weight of a dark and troubled past, Hayden cannot resist the temptations he encounters on the street. CROSSING THE LINE marks the moment Hayden’s sex-addiction first rears its ugly head.