Okay, this has apparently been going on for a year and a half and I’m only now catching on. But I just discovered that the Amazon pages of my books are continually compiling the most highlighted quotes from my books.

To explain for those of you who might not have an e reader – yet! – you can highlight passages of books that you read on your Kindle, and I’m assuming other reading devices, to refer back to at your leisure.  Whether or not you, the reader, know that this information is being compiled online is a different question.

Well, do you?  Some books you might not want to have those special passages spotlighted, if you see what I mean.

The debate about that aspect happened a year ago, (and here’s another) and granted, a year ago was not a very good time for me, to put it mildly, but I certainly didn’t know about this little Amazon feature.

Now, I’m not a big fan (also putting it mildly) of the overshare zero privacy aspect of soclal networking in general. Some things I don’t mind people knowing. Anyone who wants to know my politics, for example, only has to take one look at my hair. And like most authors I’ve gotten used to living in a semi-spotlight; I don’t mind that. On the other hand, I regularly lie on Facebook so that anyone who tried to put together a profile of personal details on me would have a hard time sorting the wheat from the chaff. The idea of Facebook Timeline horrifies me – I don’t even want to be able to look at what I’ve done in my life in what order, much less have anyone else be able to look at it.  Except that it would be fun to put together an entirely fake timeline. That is, if one had any of this said time to begin with.

And I find it horrifying that you would have to KNOW to opt-out of an e reader highlighting feature. Privacy should be the default, not something you have to opt in to.

But Big Brother aside, for the moment this highlighted quotes feature is actually totally EXCELLENT news for me because it means today, instead of a long blog post on what I think is important advice for those of you in the middle of Nanowrimo, I can just give you a pithy list of what readers think is the best advice in my Screenwriting Tricks books. And you all know how much I love lists.

So here you go: 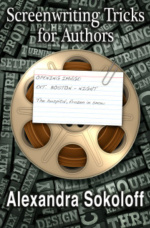 – All of these premises contain a defined protagonist, a powerful antagonist, a sense of the setting, conflict and stakes, and a sense of how the action will play out.

On a character’s GHOST or WOUND

– We all unconsciously seek out people, events and situations that duplicate our core trauma(s), in the hope of eventually triumphing over the situation that so wounded us.

– The arc of the character is what the character learns during the course of the story, and how s/he changes because of it. It could be said that the arc of a character is almost always about the character realizing that s/he’s been obsessed with an outer goal or desire, when what she really needs to be whole, fulfilled, and lovable is _______ (fill in the blank).

On HOPE and FEAR

– Our fear for the character should be the absolute worst case scenario:

– The lesson here is – spend some quality time figuring out how to bring your hero/ine’s greatest nightmare to life: in setting, set decoration, characters involved, actions taken. If you know your hero/ine’s ghost and greatest fear, then you should be able to come up with a great setting (for the climax/final battle) that will be unique, resonant, and entirely specific to that protagonist (and often to the villain as well.)

On PLAN (and ACT II)

– This continual opposition of the protagonist’s and antagonist’s plans is the main underlying structure of the second act.

– STACK THE ODDS AGAINST YOUR PROTAGONIST. It’s just ingrained in us to love an underdog.

– “Every genre has its own game that it’s playing with the audience.”

– The game in the romance genre is often to show, through the hero and heroine, how we are almost always our own worst enemies in love, and how we throw up all kinds of obstacles in our own paths to keep ourselves from getting what we want.

– A great, emotionally effective technique within the final battle is to have the hero/ine LOSE THE BATTLE TO WIN THE WAR.

– This continual opposition of the protagonist’s and antagonist’s plans is the main underlying structure of the second act.

– I’m a firm believer that just ASKING the questions will prompt your creative brain to leap into overdrive and come up with the right scenes. Our minds and souls long to be creative, they just need us to stop stalling and get our asses in gear.

– So once you’ve got your initial plan, you need to be constantly blocking that plan, either with your antagonist, or the hero/ine’s own inner conflict, or outside forces beyond her or his control.

– Very often in the second act we will see a battle before the final battle in which the hero/ine fails because of some weakness, so the suspense is even greater when s/he goes into the final battle (climax) in the third act.

– After I’ve finished that grueling, hellish first draft, the fun starts. I do layer after layer after layer: different drafts for suspense, for character; sensory drafts, emotional drafts, each concentrating on a different aspect that I want to hone in the story, until the clock runs out and I have to turn the whole thing in.

Now, if I’m remembering my own books correctly – always a big if – these are all quotes from the first few chapters, in both lists. I don’t know if that’s because all my best material is in the first chapters (JUST KIDDING) or if this is some quirk of the system that because only the top 10 quotes are listed, the quotes tend to be from the first chapters. Maybe someone else who is more familiar with this feature can explain this to us.

But actually, I’m pleased with the quotes that people have pulled. It makes me realize that sometimes short is best.  (It just takes so long to be short…).

So, everyone – have you all known about this highlights-sharing all along?  Whether you did or didn’t, what do you think about it? Are we all already doomed on the privacy front? Are we just going to let it all slide?

And those of you who are doing Nano, how’s it going?