Note: In one of those timing anomolies we encounter from time to time, my current rendezvous with Wildcard Tuesday falls one day before my usually scheduled blog posting.

So I’ll be up here tomorrow as well. (Don’t say I didn’t warn you.) 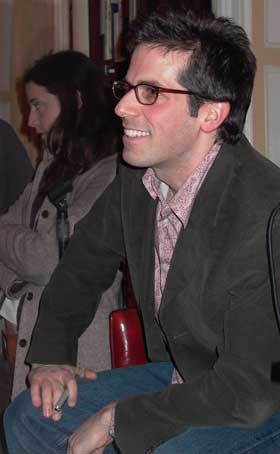 I had the good fortune to attend a City Arts & Lectures interview with Jonathan Lethem last Thursday, with author Robert Mailer Anderson providing the Q’s for Lethem’s A’s.

It’s evenings like this that remind you just how little you’re accomplishing.

On the plus side, I was dazzled.

Lethem has such a fundamentally curious, protean, sprawling mind that he managed to discuss everything from his passion for music—the one art form to which he can truly surrender as a pure fan, since he has no talent in that realm—to life with his painter father, the death of his mother when he was thirteen, and the enduring influence of Raymond Chandler and Don DeLillo on his writing.

But what really intrigued me was his Promiscuous Materials Project. This is where he offers certain of his stories to screenwriters and dramatists at a nominal ($1) fee to adapt as they wish. (He does the same for certain song lyrics he’s written over the years, offering them basically gratis to songwriters.)

But the real impetus for this particular promiscuity came when both a filmmaker and a dramatist simultaneously sought the rights to adapt his novel Fortress of Solitude.

Normally, multiple adaptations are impractical, especially in film, given the need to secure all rights to attract investors. But Lethem did everything he could to make sure both artists had a chance to proceed. Whether that happens or not remains to be seen.

Due to contractual obligations with his publishers, he doesn’t allow the stories to be used as the basis for other written projects, i.e., as the source for other stories or novels.

But by making the stories available in this way, for films or stage performances, he hopes not only that more people will read the actual stories, but that those stories will acquire innumerable new lives in whatever artistic form their new creators see fit.

This is part of a larger movement, much of it currently restricted to digital or web-based art. But with Facebook entering the publishing world—with text available for open social comment and in some cases even revision—the world of the story as we know it is changing rapidly. The individual storyteller is leaving his solitary garret to become part of a virtual tribe, with the word on the page never fixed, but open to constant reworking, not just by the artist but the reader.

This is no doubt perplexing to many, terrifying to some, and appalling to not a few. Some may think it’s nothing but a vanity project. It smacks of piracy, and I’m sure some people fear it’s one more step toward the total impoverishment of working artists. It challenges our notions of individual responsibility, talent, and imagination. It’s also, apparently, inevitable in one form or another in arts across the board.

So, dear readers—what say you on promiscuous literature? An intriguing creative frontier, or the edge of the pit of doom?

Time for a little promotion. I’m teaching another online class through LitReactor, starting Thursday. We still have a few seats available so sign up now.

The Spine of Crime: Setting, Suspense, and Structure

in Detective, Crime, and Thriller Stories

Building on my preceding course, The Character of Crime, I move from the Who of crime writing to the Where, What and How. (The prior class is not a prerequisite for this course. The subject matter to be covered here stands alone.)

In this 4-week course and workshop, you’ll learn the crucial role of setting in crime stories—perhaps the most setting-dependent genre in literature. You’ll learn how to let suspense emerge not from coincidence but as a natural extension of character, context, and conflict. Last, you’ll learn how to construct the “spine” of your story through structure, finishing up with an examination of the unique plot elements that characterize stories in the detective, crime, and thriller sub-genres.

Week 1 — Setting: How to Ground your Theme, Characters, and Structure in Place

Whether your story takes place in a pastoral village or a skyscraper jungle, how people live in a specific place and time will define the nature and limits of what’s deemed a crime, who gets called a criminal, and what stands for justice.

The trick is always to make the reader keep turning pages. Creating suspense always requires a bit of legerdemain, but to do it well, you need to look deep inside your story, not rely on chance.

Three-Act structure too often strands the writer in a meandering second act. By understanding structure as an outgrowth of character, plot points become meaningful events in your story’s growing conflict, not just turnstiles in the plot.

Each sub-genre has its own unique thematic emphasis, and that’s reflected in the nature of the adversaries and the conflict they generate. Those variations result in unique structural emphases and expectations.

Jukebox Hero of the Week: On the subject of the inevitability of change, here’s They Might Be Giants, with their anthem to impermanence, “Istanbul (Not Constantinople)”: