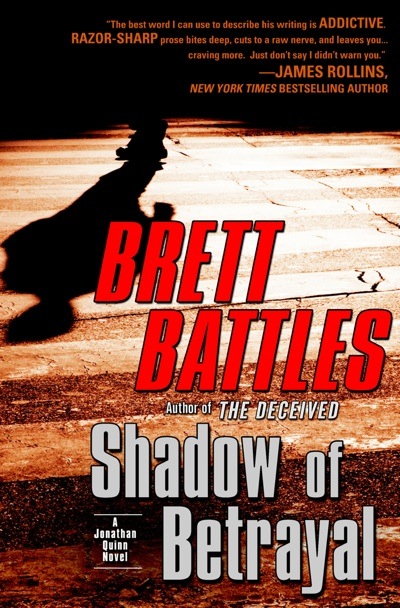 To quote Louise from a couple of months ago, “I only get to do this once a year, so you have to bare with me.”

It’s publication time for my third novel, SHADOW OF BETRAYAL, and I couldn’t be more excited. SHADOW hits stores next Tuesday…just in time for Thrillerfest next week, which I will be attending! And for those of you in the U.K., you get it even earlier, albeit under a different title…THE UNWANTED should be available in U.K. store as of today! That’s right TODAY!

“The best word I can use to describe his writing is Addictive. Razor-sharp prose bits deep, cuts to a raw nerve, and leaves you…craving more. Just don’t say I didn’t warn you.” — James Rollins, New York Times Bestselling Author.

About SHADOW OF BETRAYAL

Three jobs, no questions. That was the deal Quinn had struck with his client at the Office. Unfortunately for him, Ireland was just the first. Now Quinn, along with his colleague and girlfriend—the lethal Orlando—has a new assignment touched off by the killings in Ireland. Their quarry is a U.N. aide worker named Marion Dupuis who has suddenly disappeared from her assignment in war-torn Africa. When Quinn finally catches a glimpse of her, she quickly flees, frantic and scared. And not alone.

For Quinn the assignment has now changed. Find Marion Dupuis, and the child she is protecting, and keep them from harm. If it were only that easy.

Soon Quinn and Orlando find themselves in a bunker in the California hills, where Quinn will unearth a horrifying plot that is about to reach stage critical for a gathering of world leaders—and an act of terror more cunning, and more insidious, than anyone can guess.

Fast, smart, sleek, and stunning, Shadow of Betrayal is vintage Brett Battles: a gritty, gripping masterpiece of suspense, a thriller that makes the pulse pound—and stirs the heart as well.

After I get back from Thrillerfest, I’ll be going on a mini-West Coast tour. If you’re near one of these locations, stop by and say hi. I’d love to meet you.

And if anyone’s been waiting for the paperback of my second book, THE DECEIVED, it’s now available!

Hope to see you all on the road somewhere!

17 thoughts on “It’s time to be BETRAYED”